Brady’s age-defying performance, which earned him the Most Valuable Player award, brought the curtain down on what was perhaps the most challenging season the NFL has had to navigate because of the COVID-19 pandemic. 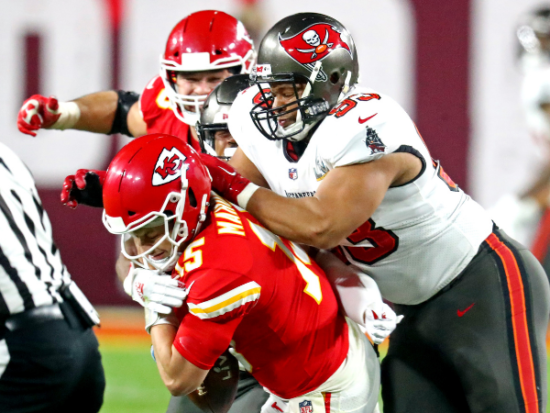 While the pandemic reined in America’s biggest sporting party, the show went on as scheduled, and once again, Brady, appearing in his 10th Super Bowl, was the star completing 21 of 29 passes for 201 yards.

The NFL championship game had been hyped as a battle between Brady, recognized as the greatest quarterback of all-time and Chiefs counterpart Patrick Mahomes, 25, widely regarded as the best in the game today.

But in the end, it was no contest as the Bucs’ rampaging defense harassed Mahomes the entire night as the Chiefs Super Bowl title defense came to a jarring end.

The only team to play a Super Bowl on their home field, the Buccaneers made the most of the opportunity.

In the opening half, it was the Brady and Rob Gronkowski show as the former New England Patriots hooked up on eight- and 17-yard touchdowns. Brady also made the Chiefs pay dearly for some undisciplined play connecting with Antonio Brown for a touchdown strike with six seconds left in the half after pass interference and unsportsmanlike penalties put the ball on the Chiefs’ one-yard line.

Meanwhile, Mahomes and the Chief’s explosive attack could not get in gear with scoring limited to a pair of Harrison Butker field goals to go into the intermission down 21-6.

The Chiefs struck first in the second half as Butker booted another field goal, but the Buccaneers would hit back with a Leonard Fournette 27-yard touchdown run and a Ryan Succop field goal cruise into the fourth quarter with a 31-9 lead.