This Sunday, Feb. 7, The Weeknd expects to take the stage at the Super Bowl LV Halftime Show, and he is looking to capitalize on the appearance. The singer revealed in a recent interview with Billboard that, in addition to the budget provided by the NFL, he spent $7 million of his own money on production.

“Though the organizers are as usual covering all production costs, Tesfaye put up $7 million of his own money to ‘make this halftime show be what he envisioned,’” Billboard said.

Although performers themselves are not paid for the performance, the NFL frequently spends somewhere in the realm of $10 million paying for half-time show production costs.

“We’ve been really focusing on dialing in the fans at home and making performances a cinematic experience, and we want to do that with the Super Bowl,” The Weeknd told Billboard. Plans remain under wraps for his performance, including a set-list and possible surprise appearances.

“We always had the Super Bowl on our bucket list, and we’ve always had timelines for all of our goals,” Amir “Cash” Esmailian reported to Billboard, who is The Weeknd’s co-manager. “It came a few years earlier than we expected.”

The Super Bowl and COVID-19

Jennifer Lopez and Shakira co-headlined the show last year, one year after the 2019 half-time faced by Maroon 5. This year’s show will take place in Tampa, Florida, at Raymond James Stadium.

This is where the Buccaneers of Tampa Bay will take on the Kansas City Chiefs. Due to the ongoing COVID-19 pandemic, attendance at the 65,000-seat stadium will limit 22,000 fans to meet social distance limitations. 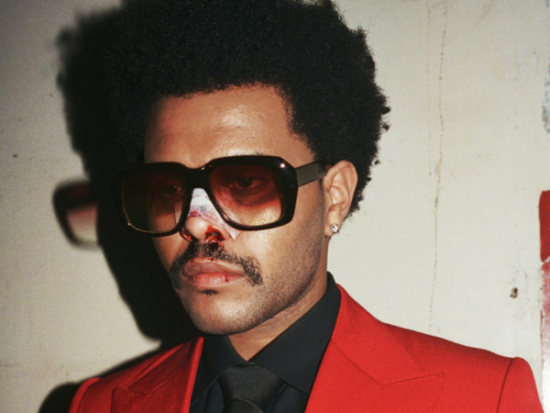 In the days and weeks before The Weeknd’s performance this Sunday, many fans and people have commented on the face bandages he’s worn in recent photos and during the AMA Awards. An interview with Variety helped shed some light on all the madness.

In November 2020, The Weeknd released his new “After Hours” album. This came with some hit singles like “Blinding Lights” and “Heartless.” Then it began the persona of the busted-nose, red-jacket wearing character.

It also created his lousy night in the Las Vegas storyline. So, the bandages and costume all have to do with the storyline and character he has created about his album.