This Sunday’s Super Bowl in Tampa will hardly rake in as much revenue as in past years but it is a welcome salve for Florida’s third-largest city, with local businesses grateful for any windfall during a pandemic.

Last year’s Super Bowl, 280 miles (451 km) down the road in Miami, brought that city $572 million in new spending, according to Miami’s Super Bowl Host Committee. This year’s figure is expected to be far lower due to COVID-19, with limited attendance at the game, canceled corporate events and curtailed spending. 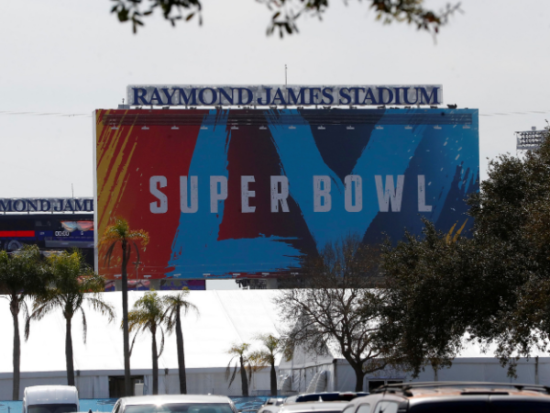 “We will see economic impact, the question is how much, based on all the things that are missing for us.”

Tampa and the Super Bowl

Since March, tourism industry sectors in Tampa have had to lay off 50%-75% of their staff and have begun to re-employ people only gradually, Corrada said. But the activities surrounding the National Football League’s showcase game – which this year features the hometown Tampa Bay Buccaneers against the Kansas City Chiefs – may create some jobs, particularly in hotels that receive an influx of guests, he said.

Hotel occupancy in Tampa was at 53.3% as of Jan. 23, compared with a typical rate of 73.4% at this time of year. That is a far cry from the hotel occupancy low of 22.3%, which the city hit in April, and it is likely to go up as visiting fans and the Chiefs take over hotels close to the stadium.

“There’s so much hope for 2021,” he said, noting that the Buccaneers playing the first Super Bowl home game after acquiring star players like six-time NFL champion Tom Brady gives the city “a Cinderella story” that could likely generate tourism dollars.

“Anytime Tampa, Tampa Bay is mentioned is free marketing and free advertising, and we’ve gotten it in spades since Sunday. I can only imagine what a Super Bowl win does for us.”

Tampa’s last hosting gig in 2009 came with its own headaches amid the recession, with a PriceWaterhouseCoopers report at the time estimating direct spending would be about $150 million – $50 million less than the previous two Super Bowls in Phoenix and Miami. 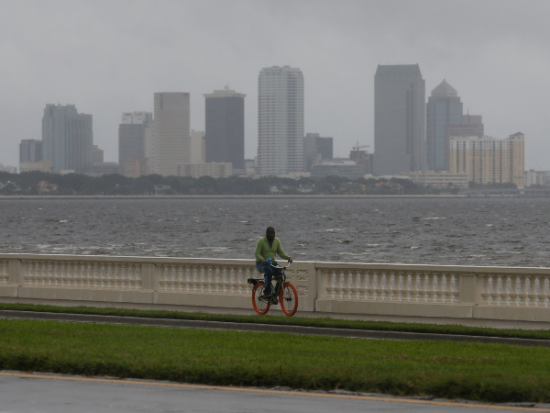 The Tampa skyline is seen in the background as a man bikes along Bayshore Boulevard ahead of the arrival of Hurricane Irma in Tampa, Florida, U.S., September 10, 2017. REUTERS/Chris Wattie/File Photo

And with the 65,890-capacity Raymond James Stadium opening its gates for just 22,000 fans in general admission and 2,700 in suites, local officials said the reduction in economic activity this time around will be an undeniable reality for the city’s fifth stint as a Super Bowl host.

“It’ll be less than what a normal Super Bowl has been and we’re seeing there isn’t as much activity as normal,” said Bob Rohrlack, the president and CEO of the Tampa Bay Chamber.

But Rohrlack, who said the COVID-19 pandemic hit the local hospitality industry like a “lightning strike,” added that the curtailed spending around this year’s Super Bowl was an opportunity to look “at that glass half-full.”

“Probably every other host, every other city with an NFL team, would like to have a Super Bowl coming in to get any positive economic impact we can get,” said Rohrlack.

Chuck Calhoun, the general manager for Pete’s Place North and Pete’s Place South bars, both in Tampa, said he and his staff were “hoping and praying” that the game – and the days leading up to it – will help bring back the momentum lost to the pandemic.

“Before COVID hit, we were a steamship – there was coal in the oven and we were burning so hard,” said Calhoun, who estimated that they were closed for five months in 2020 and said on Wednesday that he had not seen much of a jump in business yet, particularly in the “South” location, which is entirely indoors.

“People are skittish about coming out to the indoor locations right now,” said Calhoun, noting that some patrons were weary of dealing with mask regulations.

“We have the same rules as everybody has,” he said. “When you get up, you need to have (a mask) on.”

Those rules have grown only more stringent with the game coming to town, with masks now also required in outdoor environments where social distancing is not possible, as the COVID-19 pandemic has claimed more than 440,000 lives across the United States.

“We intend to put on the best Super Bowl ever, even if it’s under some unusual and difficult circumstances,” said Castor.