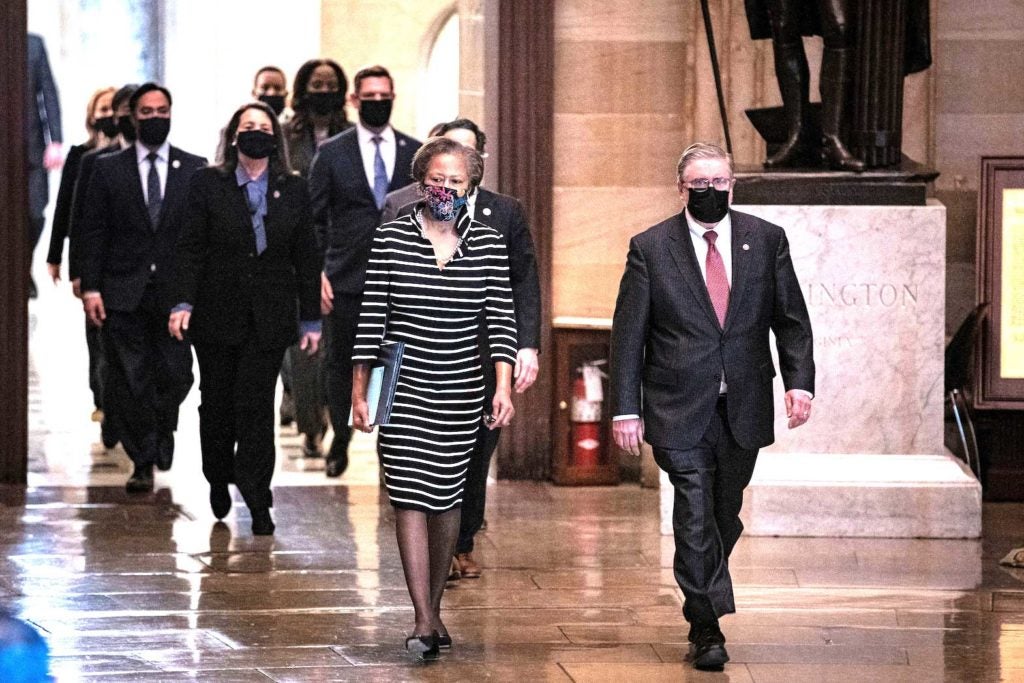 House impeachment managers led by Cheryl Johnson, clerk of the House of Representatives; and Timothy Blodgett, acting sergeant at Arms of the House, arrive to deliver an article of impeachment against former President Donald Trump to the Senate for trial on accusations of inciting the deadly January 6 attack on the Capitol, at the Capitol building in Washington, U.S., January 25, 2021. REUTERS/Al Drago/File Photo

The upcoming second impeachment trial of former President Donald Trump, focusing on a charge of inciting the deadly Jan. 6 storming of the U.S. Capitol by his followers, has prompted a debate over whether the proceeding is constitutional.

Some legal experts have said it is appropriate to hold the trial after Trump has left office, but there is no clear answer in the U.S. Constitution and no court has ruled on the issue. Many Senate Republicans have said they would vote to acquit Trump on that basis. Democrats note that the House of Representatives voted to impeach Trump a week before he left office.

Here is an overview of the once-academic debate that has taken on new importance.

Is there a consensus on whether Trump’s post-presidency trial is legal?

No, but the majority of experts say it is constitutional to have an impeachment trial after an official has left office, said Brian Kalt, a law professor at Michigan State University and a leading impeachment scholar.

Kalt was part of a bipartisan group of roughly 150 lawyers who signed a letter arguing that Trump can still be convicted in an impeachment trial.

Signatories of the letter included the co-founder and other members of the Federalist Society, a legal group that wields influence in conservative politics.

“We differ from one another in our politics, and we also differ from one another on issues of constitutional interpretation,” said the Jan. 21 letter. “But despite our differences, our carefully considered views of the law lead all of us to agree that the Constitution permits the impeachment, conviction, and disqualification of former officers, including presidents.”

What does the Constitution say?

Under the Constitution, the president “shall be removed from Office on Impeachment for, and Conviction of, Treason, Bribery, or other high Crimes and Misdemeanors.”

In a separate clause, the Constitution says conviction can lead to “removal from Office, and disqualification to hold and enjoy any Office of honor, Trust or Profit under the United States.”

Removing an official requires a “conviction” by a two-thirds Senate majority under the Constitution. Under precedent, only a simple majority is needed for disqualification. Historically, that vote only happens after a conviction.

What is the main argument for “late impeachment”?

Many experts believe that presidents who commit misconduct late in their terms should not be immune from the very process the Constitution created for holding them accountable.

Since the Constitution makes clear that impeachment proceedings can result in disqualification from holding future office, there is a live issue for the Senate to resolve even though Trump is no longer president, those scholars argue.

What is the argument against holding the trial now?

Luttig has said that the text and purpose of the Constitution make clear that the Senate’s power is limited to convicting a sitting president.

Historical texts indicate that the nation’s founders saw impeachment as a way to remove officials from their jobs so they do not further harm the country, those lawyers argue.

Is there historical precedent?

There are two instances in which the Senate held impeachment trials for officials after they had left office — Senator William Blount in 1797 and Secretary of War William Belknap in 1876. Blount’s trial was halted before the Senate could decide its verdict and Belknap was acquitted.

Luttig has argued that Congress’ earlier interpretation of its power is just one factor to consider and does not have the same significance as a court decision.