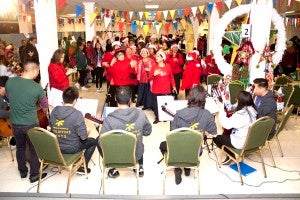 A merry crowd of seniors from the Veterans Equity Center sing and dance to popular folk tunes performed by the ACPA Rondalla group. INQUIRER/Wilfred Galila

The rainy weather neither dampened nor deterred the spirit of members of the community and guests to gather in celebration and bask in rays of warmth and hope in this year’s festival of stars and lights.

Culminating at Jessie Square in the past years with the steps of St. Patrick Church serving as the stage and preceded by a parade of contingents with their lanterns from Yerba Buena Gardens that starts at 6:00 p.m., this year’s festival took place, for the first time in its history, in the church’s social hall due to steady rain showers of a typical Bay Area winter following a long bout of drought. 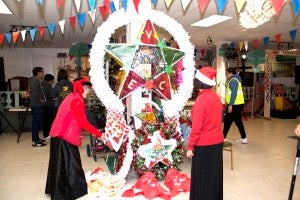 “We were able to skirt away from having to worry about rain for many years,” Bernadette Borja Sy, director of FADF and Bayanihan Community Center, said. “The weather changes it for us every year and it’s a test of our bayanihan spirit and our ability to be resilient, given the challenges.”

Bayanihan means working together and community. And just like the bamboo plant, from where material for the structure of the parol is traditionally derived, that bends in the direction of stormy winds without breaking in spite of the struggle, the resilience and bayanihan spirit of the Filipino community was in full force.

“We all understand what the bigger vision is of creating something bigger than ourselves, to create something beautiful,” Sy said.

“Until 2:00 p.m., we have not yet decided whether we will use the social hall for the festival because according to the weather channel it wouldn’t rain at 5:00 p.m.,” MC Canlas, founder of the Parol Lantern Festival and community historian, said. “It turned out to be a blessing and a serendipity.” 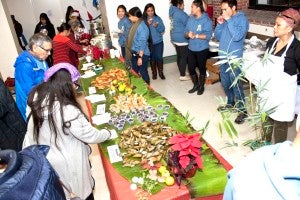 Philippine delicacies at the Taste of Christmas. INQUIRER/ Wilfred Galila

Serendipity, according to Canlas, has been a part of the festival since its inception in 2003 and is a cause of how it came to be.

In 1997 the Delta Hotel, a residential building at the corner of 6th and Mission streets in the South of Market (SoMa) that was owned by Dr. Mario Borja, who was Sy’s father, was consumed by flames. To rehabilitate the building, it was sold on the condition that it would be renamed the Bayanihan House and part of it would be the Bayanihan Community Center providing affordable housing as well as services and space to the Filipino community. Canlas was hired as a consultant and strategist by FADF.

“I designed the concept of how the Bayanihan Community Center would be placed in the SoMa neighborhood,” Canlas said.

“It’s the cornerstone of building a community, because everybody now can have what they can call their own space. That’s important in claiming the neighborhood.”

“This clearly was a neighborhood that was overlooked,” Sy said. “They also overlooked the community that was living here.”

“It took us a lot of time to get the building going, so we thought of something to galvanize the community,” Sy said. “There were many sectors to the community and everyone was separated according to what their need was. We didn’t think that if we just built it, they would come.” 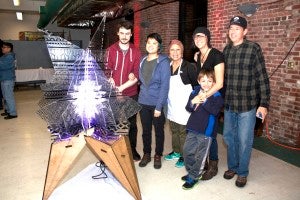 The commisioned work for the 2016 SF Parol Lantern Festival by artist Lynn Bryant, second from right, and her team with Alleluia Panis, center. INQUIRER/Wilfred Galila

“We belong to the same village that holds the lantern festival in San Fernando, the Giant Lantern festival or Ligligang Parol. It’s part of our culture and tradition growing up,” Canlas said. “When I saw my friend, I got the idea… we can have a lantern festival!”

Having thought about having a lantern festival but having no lanterns, Canlas asked his friend if he could send over some parol from the Philippines. His friend promised that he would.

“Since there was a commitment that we will have lanterns, I then told Bernadette about doing a parol-making workshop,” Canlas said. “We didn’t have bamboo then, so we used barbecue skewers, wires, and thread to make the parol frame.”

The products from the parol workshop became a part of the festival parade. The parol-making workshop, the first leg of activities leading to the festival, is free to the public. It is held on Fridays and begins at the end of October at the Bayanihan Community Center.

In October to November of 2003, Dr. Borja with some of his friends went to the Philippines to attend a golf tournament. Canlas and company requested for bamboo and cellophane for parol making to be brought back.

By November of 2003, Canlas received word from his friend in San Fernando that the lanterns that he asked for had been shipped. “Two 12-foot lanterns with 1,000 lights,” Canlas said. “When the first two lanterns arrived, we were able to install them in front of St. Patrick Church.”

The very first Parol Lantern Festival in December of 2003 was held at the Yerba Buena Center for the Arts Forum with a parade of 1,000 parol lanterns.

“That first year was truly magical,” Sy said. “It was the first and last Parol Festival that my dad saw.”

The annual SF Parol Lantern Festival, a reflection of a growing and evolving community unified by the bayanihan spirit, has expanded and transformed through the years.

“The biggest change over the years was really our partnership with Kularts,” Sy said. “They know community and understand how to provide order, because even community requires some level of structure. We realize that the structure around also helps in getting funds to support it. FADF is the project sponsor while Kularts produces it.”

Kularts became the cultural partner in programming and production of the festival. In 2006, Alleluia Panis, executive and artistic director of Kularts, presented the idea of raising the bar of creativity and quality of the lanterns and the performance of the contingents by introducing the Tala (star) Awards and a yearly theme for the festival. From what used to be a grand prize followed by three consolation prizes, the awards has evolved this year into four categories: Best Performance/Presentation, Best Contingent by a Student Group, Best Parol Design incorporating the theme and Grand Prize Winner. The theme for 2016 is SoMa Pilipinas: Filipino Cultural District.

The alternative venue gave the 2016 festival an intimate feel that felt like being at a fiesta in the Philippines. With the usual parade forgone due to the weather, community members and guests of all ages crowded comfortably in St. Patrick Church’s social hall. Live music was provided by the American Center of Philippine Arts (ACPA) Rondalla group, Lendl San Jose aka Ukelenny, Joey Camins, and Kulintronica by Ron Quesada.

Contingents were comprised of various Filipino American organizations with their respective parol creations and presentations, all vying for the Tala Awards. The most interesting and creative entry was by An Otherwise Co., a women-led full service creative agency, with its highly conceptual parol-cum-art installation that symbolizes the north star, “reminding us that we are all made up of stars, and asking Filipinos across 7,100 islands and the diaspora to all shine.”

“You’re not limited to the five pointed lantern. I want to encourage people to be more creative,” Canlas said.

To encourage creativity and new designs, the festival has commissioned artists to have their own innovative take on the parol starting in 2015. This year’s commissioned work is a stunning sculpture that breaks boundaries. The multidimensional piece was created by Lynn Bryant and her team.

A highlight of this year’s festival was the “Taste of Christmas,” a sampling of various Philippine delicacies or kakanin that, along with the parol, are evocative of the holiday season and spirit provided by Rosie Drapiza, Inay’s, Kababayan Restaurant, Noel Samonte, Jojo Liangco, Mang Balingit, Rolly Recio, Lou Tancinco and Alleluia Panis.

Among the sweet, savory and salty treats for the taking were bibingka, cassava, champorado with danggit, puto, turon, and Pampanga delicacies such as tamales also known as buboto and panara that can be downed with salabat or ginger tea and the ubiquitous hot chocolate provided yearly by sponsors.

MC Canlas was presented a plaque of recognition for his invaluable contribution in establishing the annual SF Parol Lantern Festival and as a cultural asset in SoMa Pilipinas.

The festival program was hosted by Allan Manalo and Luisa Antonio.

At the heart if it, the SF Parol Lantern Festival is truly a community-based event. A rarity at a time and place where most cultural gatherings have been shrouded by commercialism tied to a slew of corporate sponsors. The festival is a highly collaborative community endeavor down to decision-making where all voices are heard.

“It’s a practice of being able to work together within our community and share culture,” Sy said. “And when you share your culture with the mainstream, it becomes richer.”

“People have trust and faith that decisions can be filtered to what would work best for all,” Canlas said.

The most challenging aspect of the annual festival is dealing with expectations. 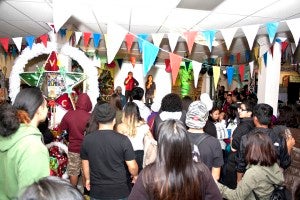 “Whether you’re a funder, sponsor, a new contingent or a volunteer, you don’t really know what to expect. It’s all about working with people and no different than working on any other project,” Sy said. “You’ll never know how it’s going to turn out and I think that’s the beauty of it, our community gets to do that.”

True to her father’s legacy, Sy envisions the festival to continue growing and evolving in years to come in the service of the Filipino community.

“We’d love for it to grow,” Sy said. “Things like this have to evolve according to the community, because community doesn’t stay stagnant. Especially in this community where people are getting displaced, and people come back. So their involvement is different than when they lived here. Yet they still come back, and they still want to be involved.”

“I just hope that the tradition can be carried on by new people who are passionate or more passionate than me,” Canlas said. “By making it a community event, that’s the legacy you can expect.”

For more information about the festival and the parol making workshops, visit: