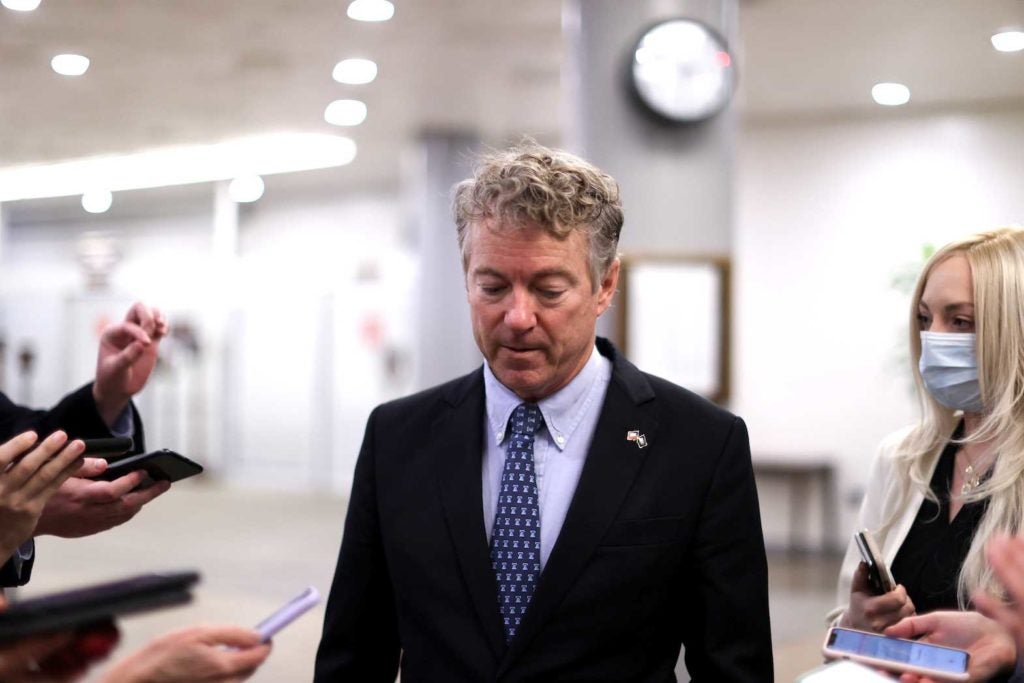 U.S. Senator Rand Paul (R-KY) is trailed by reporters as he arrives to be sworn in for the impeachment trial of former president Donald Trump in the U.S. Capitol in Washington, U.S. January 26, 2021. REUTERS/Jonathan Ernst

WASHINGTON – Forty-five Senate Republicans backed a failed effort on Tuesday to halt former President Donald Trump’s impeachment trial, in a show of party unity that some cited as a clear sign he will not be convicted of inciting insurrection at the Capitol.

Republican Senator Rand Paul made a motion on the Senate floor that would have required the chamber to vote on whether Trump’s trial in February violates the U.S. Constitution.

The Democratic-led Senate blocked the motion in a 55-45 vote. But only five Republican lawmakers joined Democrats to reject the move, far short of the 17 Republicans who would need to vote to convict Trump on an impeachment charge that he incited the Jan. 6 Capitol assault that left five people dead.

“It’s one of the few times in Washington where a loss is actually a victory,” Paul later told reporters. “Forty-five votes means the impeachment trial is dead on arrival.”

Paul and other Republicans contend that the proceedings are unconstitutional because Trump left office last Wednesday and the trial will be overseen by Democratic Senator Patrick Leahy instead of by U.S. Chief Justice John Roberts.

Leahy, 80, was briefly hospitalized on Tuesday evening after not feeling well but was released after an examination, his spokesman, David Carle, said in a statement.

Some Republican senators who backed Paul’s motion said their vote on Tuesday did not indicate how they might come down on Trump’s guilt or innocence after a trial.

The senators voted after being sworn in as jurors for the impeachment trial.

There is a debate among scholars over whether the Senate can hold a trial for Trump now that he has left office. Many experts have said “late impeachment” is constitutional, arguing that presidents who engage in misconduct late in their terms should not be immune from the very process set out in the Constitution for holding them accountable.

The Constitution makes clear that impeachment proceedings can result in disqualification from holding office in the future, so there is still an active issue for the Senate to resolve, those scholars have said.

“My review of it has led me to conclude that it is constitutional, in recognizing that impeachment is not solely about removing a president, it is also a matter of political consequence,” Murkowski told reporters on Tuesday.

Trump is the only president to have been impeached by the House of Representatives twice and the first to face a trial after leaving power, with the possibility of being disqualified from future public office if convicted by two-thirds of the Senate.

He was acquitted by the then Republican-controlled Senate last February on charges of abuse of power and obstruction of Congress arising from his request that Ukraine investigate Democratic rival Joe Biden and his son.

The House approved a single article of impeachment – the equivalent of an indictment in a criminal trial – on Jan. 13, accusing him of inciting an insurrection with an incendiary speech to supporters before they stormed the Capitol. A police officer and four others died in the melee.

But reaching the two-thirds threshold required for conviction will be a steep climb. Trump remains a powerful force among Republicans and his supporters have vowed to mount election challenges to lawmakers in the party who support conviction.

Some Republicans have criticized Trump’s false claims of voting fraud and his failed efforts to overturn Biden’s Nov. 3 election victory. But no Senate Republicans have said definitively that they plan to vote to convict him.

Although the Constitution calls on the chief justice to preside over presidential impeachment trials, a senator presides when the impeached is not the current president, a Senate source said. First elected to the chamber in 1974, Leahy is the most senior Democrat in the chamber and holds the title of Senate president pro tempore.

The nine House Democrats who will serve as prosecutors set the trial in motion on Monday by delivering the article of impeachment to the Senate.