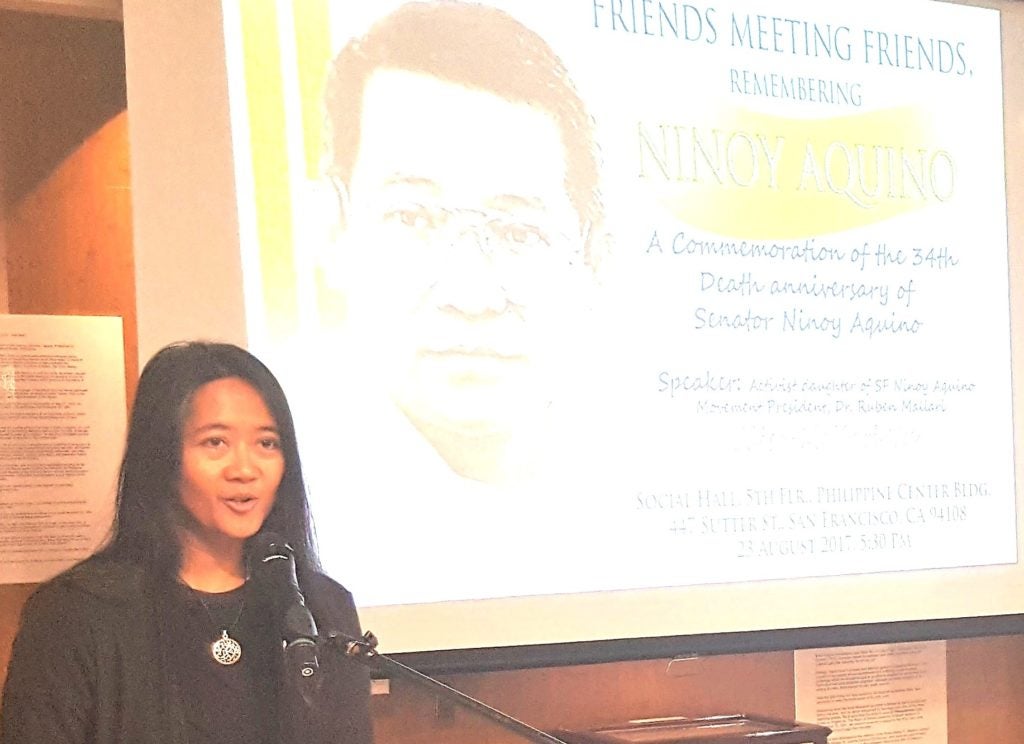 SAN FRANCISCO – Remembering history and its lessons was the recurring message at the commemoration of the death anniversary of Senator Benigno “Ninoy” Aquino Jr., who was assassinated at the then-Manila International Airport tarmac 34 years ago.

Once again, family and friends of Ninoy Aquino and several Filipino American community leaders came together at the Philippine Folk Life Museum of the Philippine Consulate in San Francisco, on August 23, to rekindle the bond that binds them and recall events of more than three decades ago and their importance today.

The 34th commemoration of the death of Senator Ninoy Aquino began with a mass celebrated by Fr. Mark Reburiano. INQUIRER/Jun Nucum

Starting with a mass celebrate by Fr. Mark Reburiano, the short program featured remarks from only a few speakers who spoke mainly of the need to cherish the democratic ideals that Ninoy Aquino espoused.

Consul General Henry Bensurto Jr. welcomed everyone by reiterating that democracy, patriotism, pakikipagkapwa and pagkakaisa (fellowship and unity) still remain relevant values, not just in the Philippines but also around the world. Ken Kashiwahara, husband of Ninoy’s sister Lupita, recounts his last flight with Ninoy on the way back to the Philippines. INQUIRER/Jun Nucum

“Ninoy’s death is and will always be part of Philippine history and his martyrdom set forth a series of events that not only changed the Philippines, but also other countries–Korea, Germany, Czechoslovakia. It continues to inspire us to pursue justice and to be courageous in the face of uncertainties,” Bensurto stated.

Guest speaker Alisa Mallari Tu, activist daughter the late Dr. Ruben Mallari, who was president of San Francisco Ninoy Aquino Movement (NAM) and a member of the Movement for Free Philippines during the Marcos dictatorship, recalled that she grew up in an environment of activism, when Filipino political personalities like Ben Cayetano, the would-be first Filipino Hawaiian governor, Raul Manglapus, Jovy Salonga, Jose Diokno and Doy Laurel would visit their house in Hawaii to passionately discuss the political situation under Marcos. Lupita Aquino-Kashiwahara, Ninoy’s sister, understands that it is natural that the passage of time dulls memories, but it is her and husband Ken’s resolve to keep Ninoy’s name and spirit alive. INQUIRER/Jun Nucum

“When Ninoy was assassinated, my parents got a call and what followed was a moment of silence, of seriousness and sadness that turned into conversation, organization, action and urgency. NAM was born, suddenly we got a lot of yellow T-shirts and pins and met every week to discuss and organize. I learned a lot about the Philippines in the kitchen since I had not been to the Philippines my whole life as we were not allowed to go there,” Tu narrated.

“I was witnessing history being made in our living room. After school we often headed off from Redwood City to come here in front of the consulate with our yellow signs and marched around. Then came the day when we were doing our marching routine, we were given the signal to rush at the door downstairs and pushed our way to the consulate. We rushed in with the TV cameras together with a lot of our fellow marchers and we invaded the consulate. And it was the signal of the end of the Marcos regime.”

Because of her experience, Tu learned that civil and human rights are values children should brought up with. Mike Gonzales, a faculty member of Philippine Studies at City College San Francisco, and son of Philippine National Artist N.V.M. Gonzalez, says Ninoy’s assassination reminds people that is not given and is something one has to work hard or even die for. INQUIRER/Jun Nucum

Ken Kashiwahara, husband of Ninoy’s sister, Lupita, recounted his last flight with Ninoy on the way back to the Philippines and the wake right after his death, when long lines of people wanting pay their last respects seemed to never end both at the Aquino residence on Times Street and in Sto. Domingo Church.

“One of the things we worried about was if after Martial Law, press censorship and a controlled media, would anyone remember who Ninoy was. But the answer became obvious as people lined up to view his body. And when we came back home to U.S., we to keep Ninoy’s name and spirit alive.”

For her part, Lupita says she understands that “it is human nature that the passage of time dulls our memories.” Susan Po Rufino, former member of Movement for Free Philippines under Professor Gaston Ortigas and Senator Raul Manglapus, regrets that 34 years since the downfall of the Marcos dictatorship the Philippines is at a crossroads again. INQUIRER/Jun Nucum

“So to remind those who were too young to remember or who weren’t even born 34 years ago, Ninoy’s ultimate sacrifice restored our democracy and freedoms, including the freedom to speak out and criticize. So if you criticize Ninoy and what he stood for, just remember he died for your right to do so,” Lupita stressed.

Philippine American Writers and Artists, Inc. (PAWA) Director Edwin Lozada said, “Ninoy’s assassination and the historical events that followed affected the whole country. All young people should know history to know themselves. If you do not know anything about Ninoy, you must make an effort to find out who he was, why he was respected and is still remembered after 34 years.”

Mike Gonzales, a faculty member of Philippine Studies at City College San Francisco, said, “As an educator, my job is to make (young people) remember the events of the past and their relevance to the future. Events like Ninoy’s assassination remind people that freedom is not given to you. You have to work hard for it and, in most cases, you have to die for it. First, we have to learn how to read, what to read, and learn to question what we are reading.” Gonzalez added that people should be very alert to efforts to revise history and bury its lessons.

Susan Po Rufino, former member of the Movement for Free Philippines of Professor Gaston Ortigas and Senator Raul Manglapus, expressed regret that 34 years later, “it seems that Filipinos are at a crossroads again, as far as the Marcoses, democracy and Philippines are concerned.”