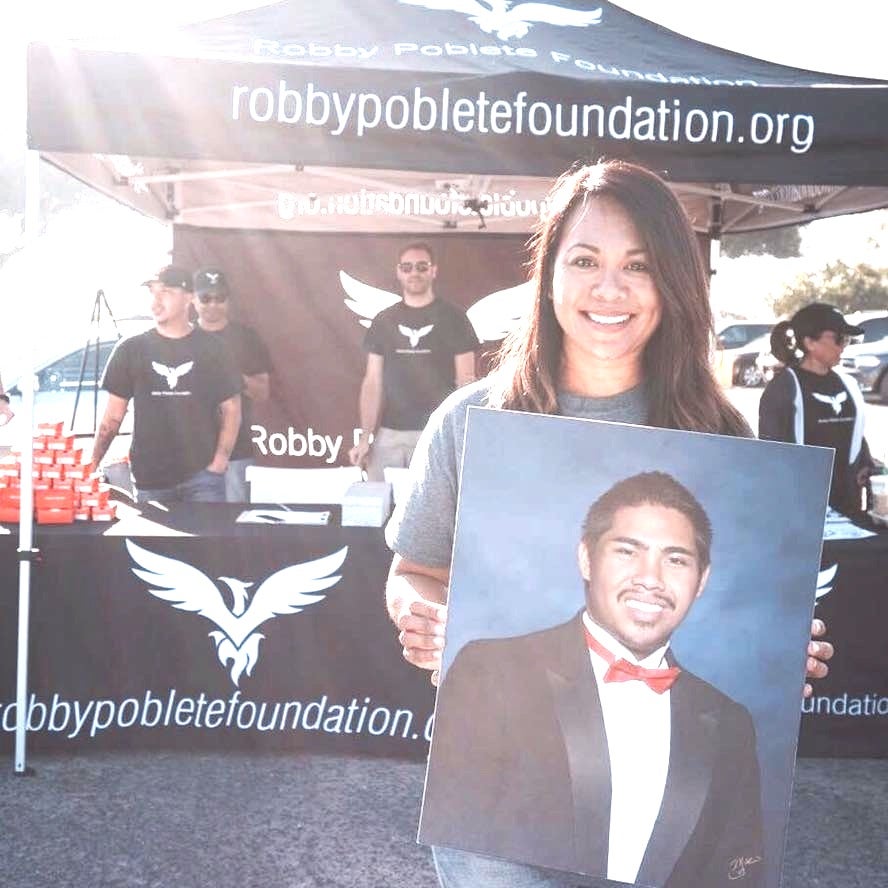 Pati Poblete with picture of her son, Robby, who was shot and killed by robbers at 23. CONTRIBUTED

Last week, as thousands were marching for 17-year-old Kian delos Santos, Pati Poblete of Vallejo, California, was getting ready to buy guns.

No, she wasn’t building an arsenal. She wasn’t preparing for war. Buying guns was an act of peace for the Filipino American writer and activist, a powerful personal statement against violence.

The day after Kian was buried, Pati led an unusual community event where gun owners could exchange their firearms for a gift certificate, no questions asked. The “gun buyback” was part of a campaign to reduce the number of guns in the Northern California city which has long wrestled with street crime and violence.

Pati’s group has a special plan for the guns collected: They will be melted down and used to create works of art in an innovative campaign called “The Art of Peace.”

For Pati, the campaign is a way of honoring the memory of her son. Three years ago, Robby Navalta Poblete was shot dead in a hotel parking lot in Vallejo. He was only 23. 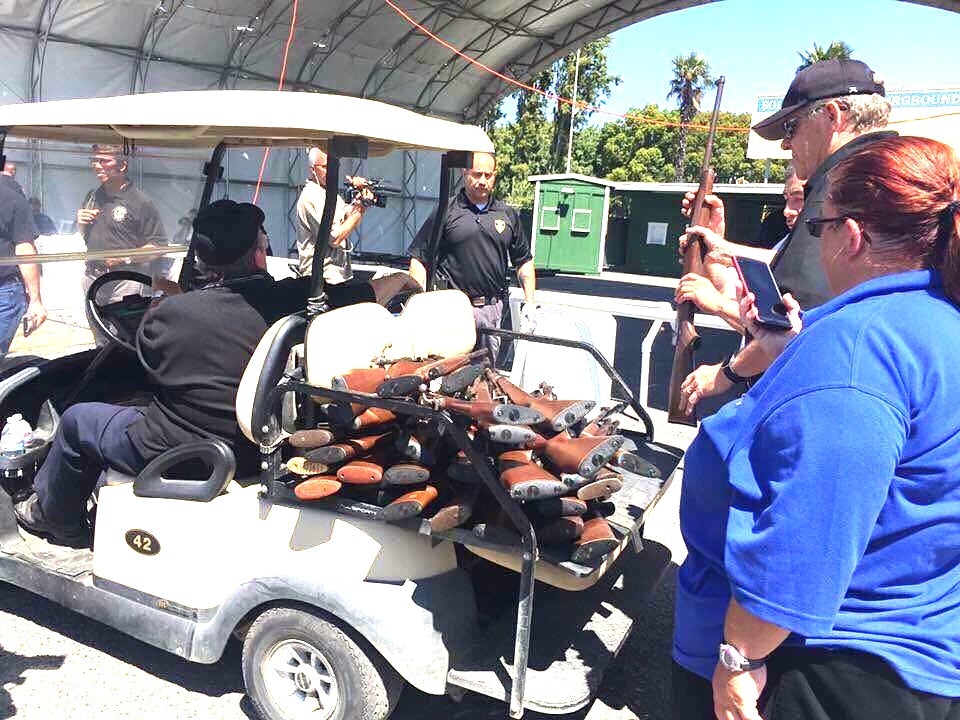 At the gun buyback in Vallejo, California, that Pati Poblete organized in memory of her son, Robby. CONTRIBUTED

Pati is my longtime friend and former colleague at the San Francisco Chronicle. She had been preparing for the Vallejo event when tragedy struck involving another young Filipino: the brutal murder of Kian delos Santos, victim of one of the most gruesome killings in the Duterte Slaughter.

The killing struck a “painful chord with me,” Pati told me.

“I think of my own son, Robby, shot and killed in broad daylight in a robbery. The people who shot my son were cold-blooded murderers who had no cause or right to take my son’s life. Those who killed Delos Santos are no different, And because they are protected by the uniforms they wear and the leader they serve – they are far more dangerous.”

That’s one thing that made the Vallejo gun buyback Pati led different. At the event, she was surrounded by law enforcers, including members of the local police department, who believed in and actively supported what she was doing.

For Pati, the Vallejo gun buyback was also part of a personal struggle to reclaim Vallejo, her hometown. Robby’s murder drastically changed her feelings toward her beloved community where she grew up and where she still has family and friends. Suddenly, Vallejo became an ugly place, a city she associated with pain and tragedy.

For two years, she said, she could not return to the city. “I couldn’t drive to Vallejo anymore. That’s how much they took from us — not just my son, but also my own community.”

Slowly, Pati realized that she had to reclaim the city she loved. She began to think, “Maybe if I’m returning for a purpose, to help the city, then it will help me go back. I wouldn’t be driving toward a tragedy — I would be driving home.”

That led her to launch the Robby Poblete Foundation, which she now leads   together with fellow journalists Cicero Estrella and Levi Sumagaysay.

The foundation spearheaded the Vallejo gun buyback which won the support of the Vallejo Police Department and many local officials, including the city’s Mayor Bob Sampayan. Congressman Mike Thompson, chair, of the gun violence prevention task force of the U.S. House of Representatives also attended the event. 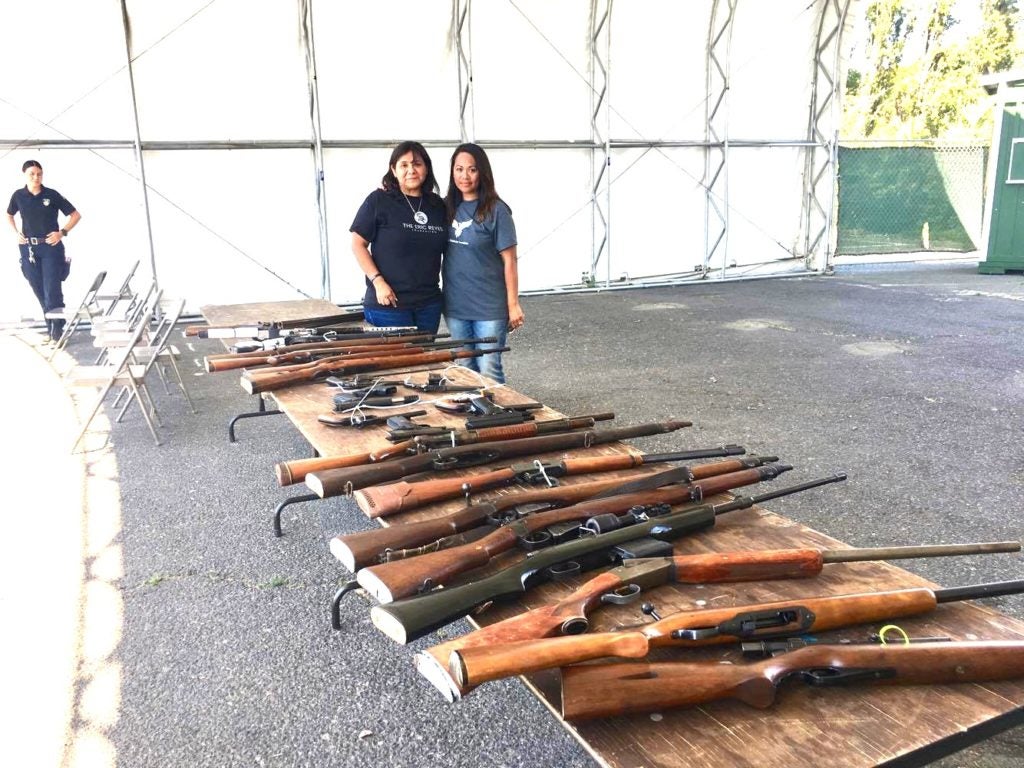 Guns that were bought back will be melted and turned into an art work called “The Art of Peace.” CONTRIBUTED

“After my son was killed, I did not want to return to Vallejo,” Pati said in her speech at the event. “I blamed the city for taking my son. But I realized that maybe we could make a change. … I realized that it wasn’t Vallejo that took my son. It was four men. Vallejo has good people, and is a good community. And when we come together, we can all be the change. My son will never come back. But we can do something to make sure fewer mothers end up like me.”

Sadly, in the Philippines, there are many more mothers and fathers like my friend Pati. She knows this. This is why Pati hopes to take The Art of Peace exhibit to the Philippines and to invite Filipino artists to participate. (Anyone who’s interested should check out the Art of Peace page of the Robby Poblete Foundation site.)

“As a mother who’s lost her child to gun violence, I have read the headlines on the extrajudicial killings in the Philippines with heartache and helplessness. I think of the thousands of mothers and fathers, sisters and brothers, who are left to behind, knowing that their loved one suffered a tragic, merciless and needless death. No one should ever have to get that call. But to know that your loved one was killed by people who are supposed to serve and protect you – under the mandate of the most powerful person in the country you live in — that is unbearable. There is no justice when the alleged ‘good guys’ have become the perpetrators of these crimes.”

“When my son was killed in 2014, my cousin in the Philippines said to me: ‘The Philippines may be a poor country, but we don’t shoot our children. Guns are not everywhere, and we don’t see shootings in the news like in America.’

“If only that were still true.”