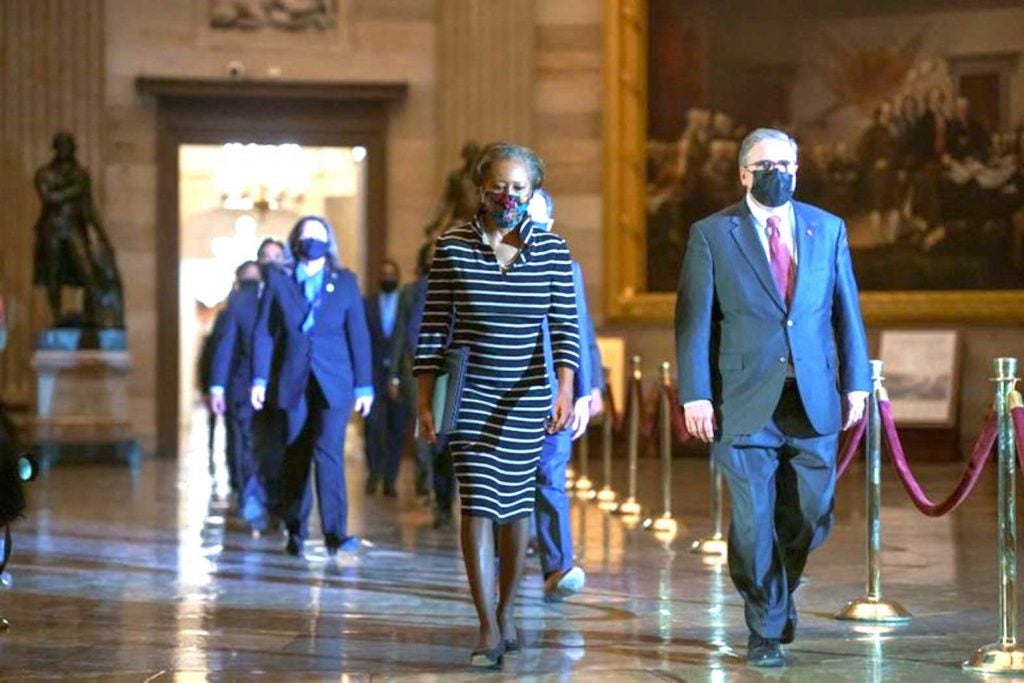 Clerk of the House Cheryl Johnson along with House Sergeant-at-Arms Tim Blodgett lead the Democratic House impeachment managers as they walk through the Statuary Hall on Capitol Hill to deliver to the Senate the article of impeachment alleging incitement of insurrection against former President Donald Trump, in Washington, January 25, 2021. J. Scott Applewhite/Pool via REUTERS

Deep in the main section of the mainstream papers was the news. It hardly is ever mentioned on television news that American Filipinos watch.

The story? “A Philippine Drug Raid Leaves 13 Dead,” said a bottom of the fold headline deep in the New York Times.

For people following the Duterte government from afar, it’s all people need to know. The numbers keep growing—almost 8,000 now have been killed in Duterte’s war on drugs the last five years.

The latest deaths in Sultan Kudarat, Maguindanao, RP, involved a former village chief suspected of involvement in the drug trade. You know the dance from there.  Police show up, perhaps to serve a warrant, but the suspects begin a shoot out, and police respond in self-defense. Instead of a simple arrest, with the suspects facing the justice system, the Philippines is turned into the American Wild West with guns ablazing.

Instantaneous justice. Especially if the bad guys die. But what if the good guys are really the bad guys, especially in a democracy that honors the rule of law. That’s the extrajudicial part of these actions, a fraction of the 8,000 deaths Duterte’s government has been charged with.

The International Criminal Court in the Hague said last month,  there was reason to believe the Philippines security forces have acted as the bad guys, and will decide on a full investigation.

The Philippines response? It’s withdrawn from the treaty establishing the court. All done?  No need to find out the truth? Of course, not. But truth and justice are hard to come by these days.

The Philippines is not alone. America, its one-time Big Brother has not been a good role model.

This week, the U.S. decides to go forward with the double impeachment of Donald J. Trump. To some, if the president was a lame duck in the first part of January and then leaves office, what good does it do now after he’s gone?

Then others say don’t you want to pluck the duck of its feathers, dress it for roasting and feast on it? Me, I’m a vegan. I just want to see justice done.

I say go over the videos of January 6th when a right-wing mob of  insurrectionists stormed  the U.S. Capitol, ransacked offices, and looked to lynch the vice president and the speaker of the house. The mob was incited by Donald J.Trump at a rally minutes before the riot.

We saw it all on television. We were witnesses to the crime were after Trump incited the riot, five people died. We saw it in real time. But this is no slam dunk. Republicans have learned from Trump. They are denying the truth.

Sarah Sanders, the former press secretary to Trump, has just announced she’s running for governor of Arkansas, as Trumpy a state as it gets. Instead of focusing everyone on Jan. 6, she just wants to remind everyone that the Democrats are about socialism (they’re not), and cancel culture (if they were, they forgot to cancel  Sanders).  She wants to ignore Jan. 6 and go after the good guys because the Democrats are ruled by left wing radicals who must be stopped! Trumpism is the last line of defense, she says.

These are the rhetorical lines that you will hear in the coming days as Republicans attempt to fight the move to convict the impeached president. Republicans are willing to throw away the truth (that Trump was bad) in order to fight their real nemesis, Democrats in power who actually want to do things to heal the country.

To convict the impeached Trump, Democrats will need 17 Republican votes in the Senate. That may be hard the further we get from Jan 6.  Sanders’ kind of rhetoric will only get louder. People simply need to stay in touch with the truth.

You saw the images of Jan. 6. Don’t forget you were a witness to a crime against the country and all its people. Don’t let politics spoil the truth.

The light of the inaugural

It’s not even a week and already the hope of the inaugural is dimming. It shouldn’t. The one take away. The historical part. On Inaugural Day, Kamala was the best Asian American among us. All day. Hooray.

As an Asian American of Filipino descent with a sense of history, I couldn’t keep my eyes off her as she graced my screen adorned in purple, or was that royal blue? It all depended on the light. It was enough to drive me crazy, until I realized that’s how it is in America these days.

We can all look at the same thing and perceive it all so differently. We just need more light.

It was great just to see the TV commentators struggle to identify Kamala: Black, South Asian, Asian American, From Oakland, California, Howard alum (no love for UC Hastings Law?), mother an Indian immigrant, father from Jamaica. Oh, and let’s not forget, woman. She is the first woman to rise to veepness. Get all those in eloquently on first reference.

People had practice during the campaign. And admittedly, Kamala has always been a bit coy, taking a page from Obama, by not making things about race. Unless she has to, and then she’s always ready to smash all assumptions.

Like when presidential candidate Kamala staggered Joe Biden on busing in an early debate with the line “That little girl was me.”

But now she is his vice president–a snapshot of our diversity, the argument for the broadest coalition of forces that includes Asian roots near the top. And with a blended family? White husband, two stepchildren? Are you kidding me?

I’ve always believed the answer to all our racial problems would come when we embraced diversity fully and showed a real love interest in one another.

Disagree with Kamala as a politician all you want. She succeeds just by being. She’s the American metaphor as we strive for the more perfect union. Because, let’s face it: In a 21st century America, a sea of all white men does not connote inclusion and unity.

Yes, but my friends on the Left still wonder how the heck did we end up with this retread Biden? And Harris? Was she really a reformer as California’s attorney general?

My friends on the Right who watch Fox News sent me a headline that said, “Joe Biden has been president for nine hours and 400,000 Americans are dead.”

Slightly unreasonable, considering they were casualties of the Trump Administration, not to mention the five who died after an attack on the Capitol, and all the people of color traumatized after four years of chaos and racial pain.

It doesn’t take hours to notice how Biden and Harris are the antidotes to our post-Trumpatic-stress. In Biden’s first executive orders we saw an end to the Muslim travel ban; a strengthened DACA; a pause in deportations; the end of funding to that border wall nonsense; and the affirmation that all people count in the Census, even non-citizens. It’s we the people. All of us, remember?

There are more good signs to come. A pathway to citizenship for 11 million people? The Statue of Liberty is dancing again. The sigh of relief from the millions of people of color impacted by it all could’ve been an inaugural hurricane.

As the flag flies, the winds are blowing our way again. We needed the inaugural pomp to offset the anxiety of Jan. 6; 25,000 troops don’t get put into place because all is well in our democracy.

And it worked. The forces of insurrection realized the shame of their racist, exclusionary, white supremacist ideas and mostly stayed hidden, festering somewhere. Mar-A-Lago? Many have already been arrested and charged.

It’s hard to believe they desecrated the same halls that we saw on TV. I recalled walking those same halls and that stepped platform when I covered previous inaugurals. This week, it was practically back to normal.

The ugly truth of politics

This is the very thing people hate and detest about our political class. We hear them fight. But then we see them get along? They are even friends. That’s not the way it is in pro wrestling.

After the ceremonies, when Biden and Harris moved inside the Capitol to receive gifts, it may have seemed strange for some to see Sen. Mitch McConnell (R-KY), last week the Senate majority leader, this week the minority leader, and Rep. Kevin McCarthy (R-CA), last week the leader who opposed certifying the election results, this week smiling and cordial. Both of them offered gifts to the new president and vice president that didn’t include a dagger to the back.

But that’s because democracy isn’t a Marvel comic book with heroes and villains. It’s real people acting with maturity and civility. They are leaders.

We haven’t had much of that in some time.

It’s the reason people say politics is “show business for ugly people.” They see the layer of fake wonky glam that covers up real intentions and declare it all duplicitous. And then beyond hair and makeup, we’ve had the last four years of lies. Two-facedness? How about more than 30,000 lies by one man alone?

Trump didn’t like wearing a mask—not for Covid—but maybe to him, his 30,000 lies were mask enough.

But that is the likely reason that Joe Biden is the best leader for these times. He’s been hated and loved through the decades. But he’s also changed and evolved, mostly for the good. When I was a talk host in Washington, DC, during the Clarence Thomas/Anita Hill hearings, Biden was considered a villain.

Not a Ted Cruz villain, mind you. Caught on camera lurking on the platform, Cruz is the man who led the charge in the Senate to block certification of the election. His was the “soft coup” that failed. He is the insurrectionists’ man. What should be his fate?

Biden, a Catholic who started the day at Mass, knows the virtue of loving one’s enemy. Maybe it takes the maturity of a 78-year-old. It’s not easy. But it’s the only way you get to that goal of love. That’s still the true object of politics, not the division and rancor of a zero sum landscape of winners and losers.

That made Biden’s speech memorable, filled with lines such as: “We must end this uncivil war that pits red against blue.” But let’s not forget that Biden is like the creamy white filling of a unique political cookie, the flip side of both Obama and now Harris.

If our country is in a political abyss, Biden knows the way out, and at least is tilting forward. But as I write, the right wants to restore Trumpism and the left, hardly a socialist mob, is wary of Biden, whom they consider a sellout.

How do we get to the truth?  Like I said, American democracy is a bad role model for the Philippines.

Emil Guillermo is a journalist, commentator, monologist and social “wittic. He writes a column for the INQUIRER.NET’S North American Bureau. See his vlog at www.amok.com