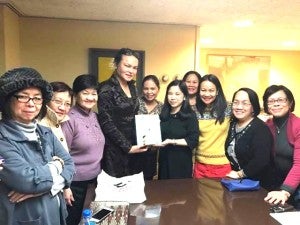 Consul General Theresa Dizon-de Vega meets with the officers and members of the Association of Filipino Teachers in America (AFTA) for an initial planning session on the 2017 Paaralan sa Konsulado. MERELA ABERIN

NEW YORK CITY – Members a Filipino American teachers’ group met with the Philippine consul here to discuss plans for next year’s Filipino school at the consulate.

The Association of Filipino Teachers in America (AFTA) led by its President Roxanne Cajigal met with Consusl General Theresa Dizon de Vega to go over the initial plans for the Paaralan sa Konsulado 2017 (PSK) and other initiatives of the association.

AFTA, composed of Filipino teachers in the US Northeast is the Consulate General’s Filipino Community partner for the Paaralan sa Konsulado.

Now on its 19th year the PSK is an education summer program held at the Philippine Center in New York and is open to Filipino and Filipino-] American children and youth who wish to learn more about Philippine history, language, customs, sports, dance, music, and the arts.

Held over several weekends, it provides the youth with opportunities to interact with other Filipino American children and to learn more about the country of their parents and grandparents 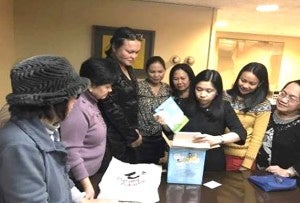 The AFTA continues to design modules, teaching tools, and conducts classes in various disciplines for the enrollees in the Paaralan sa Konsulado.

During the initial meeting with Dizon-de Vega, AFTA discussed possible themes for the 2017 edition of the PSK, venues, and other related activities. Also present was the meeting was Cultural Officer Olive Osias-Magpile.