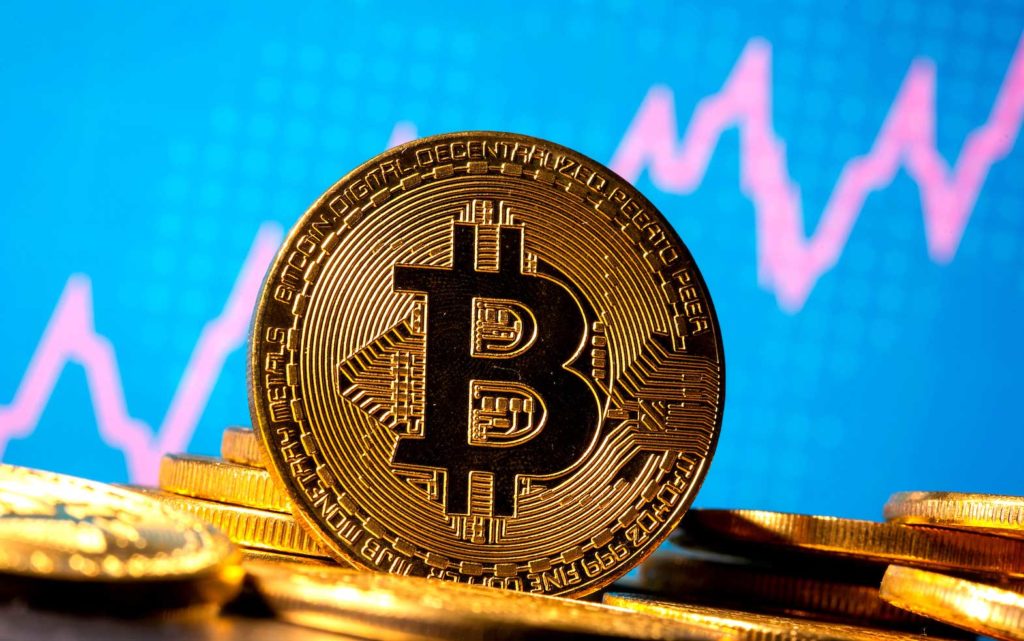 A representation of virtual currency Bitcoin is seen in front of a stock graph in this illustration taken November 19, 2020. REUTERS/Dado Ruvic

There is growing angst among investors over financial market price bubbles, and top of the list of concerns were the cryptocurrency bitcoin and U.S. tech stocks, two closely followed surveys showed on Tuesday.

According to nearly 90% of respondents in Deutsche Bank’s monthly money-manager study, many price bubbles were now being blown. The most extreme though is bitcoin, with nearly half of those surveyed seeing it at a maximum 10 on a 1-10 bubble scale.

More generally, too, when asked specifically about the 12-month fate of bitcoin – which surged 300% last year – and electric vehicle maker Tesla which soared nearly 750% and is seen as emblematic of highly priced tech stocks, a majority of respondents said they were now more likely to halve than double in value.

A similar Bank of America (BofA) survey showed that buying bitcoin had replaced buying tech stocks as the trade which fund managers saw as most crowded, knocking tech off the top spot for the first time since October 2019 and into second place.

The cryptocoin hit a record high $40,000 earlier this month, having rallied more than 900% since a low in March and having only just breached $20,000 in mid-December.

Investors were bullish on the outlook for world growth, with the proportion of fund managers surveyed by BofA who said the global economy was in an early-cycle phase, as opposed to a recession, at its highest in 11 years.

A record 92% expected higher global inflation over the next year, though Deutsche Bank’s survey also showed 71% expected the U.S. Federal Reserve to resist the temptation to start removing the stimulus that has helped markets rally.

The biggest potential tail risks that could unsettle markets in the BofA study were seen vaccine rollout problems (30%), if the Fed did taper its asset purchases (29%) and the Wall Street bubble bursting (18%).

For a graphic on Global stock valuations surge https://fingfx.thomsonreuters.com/gfx/buzz/rlgpdgnqovo/Pasted%20image%201611053527690.png

Still, although fund managers are wary of the bubbles, they weren’t yet backing away from them.

BofA said a record 19% of investors – who altogether manage more than $500 billion worth of assets – were currently taking on more risk than normal in their investment portfolios.

For a graphic on Risk: https://fingfx.thomsonreuters.com/gfx/mkt/gjnvwrxbgpw/BofA%20risk.png

A steeper yield curve – usually where longer-dated borrowing costs rise on expectations that economic growth will allow official interest rates to rise – was expected by a record 83% of BofA investors.

For a graphic on BofA: https://fingfx.thomsonreuters.com/gfx/mkt/yxmvjyrjypr/BofA.png

Elsewhere, underowned UK equities saw some money flowing in. But at 15% underweight, it remained pinned as the most underweight region, BofA’s survey showed.