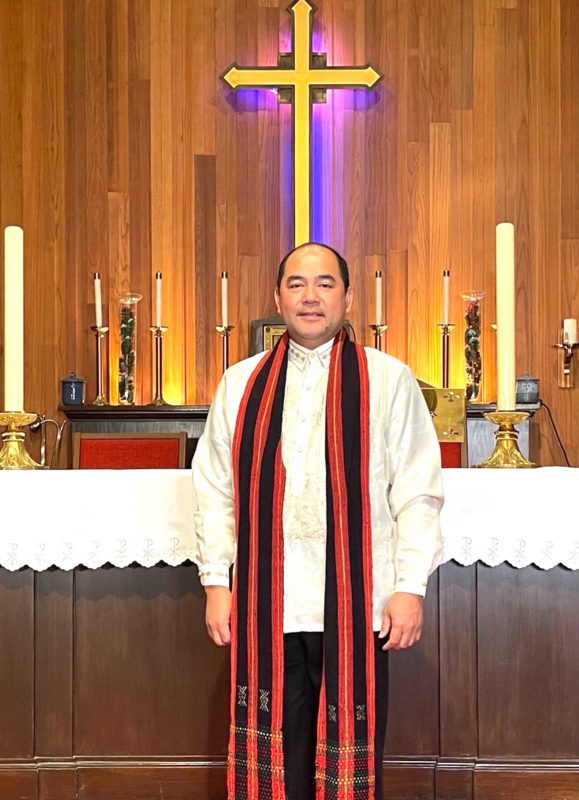 Rev. Leonard Oakes steps down the altar to minister at patients’ bedside.  CONTRIBUTED

DALY CITY, California — January 17 was the feast day of the Santo Niño, patron saint of the tightly-knit community of Holy Child & St Martin Episcopal Church in Daly City, California. On the same date that the congregation venerated the Baby Jesus, they also said goodbye to their vicar of 12 years, the popular Rev. Leonard Oakes, a Filipino American.

After presiding at his last service on the third Sunday of 2021, Kalinga Province-born Oakes, who proudly identifies as an Igorot, began his indefinite leave to focus on his work as a licensed vocational nurse.

But first he received an outpouring of appreciation from church and public officials and community partners for strengthening the body, mind and spirit of the faithful.

Those years marked the installation of an elevator for the elderly and the disabled and the establishment of a wellness center with support from Seton Medical Center and volunteers open to all regardless of address, health coverage or immigration status.

Andrus also emphasized Oakes’ ability to lead “not only in (spoken) word and deed, but also in infectiously joyful music” with which he “nurtured flourishing children and youth ministry” at the church. 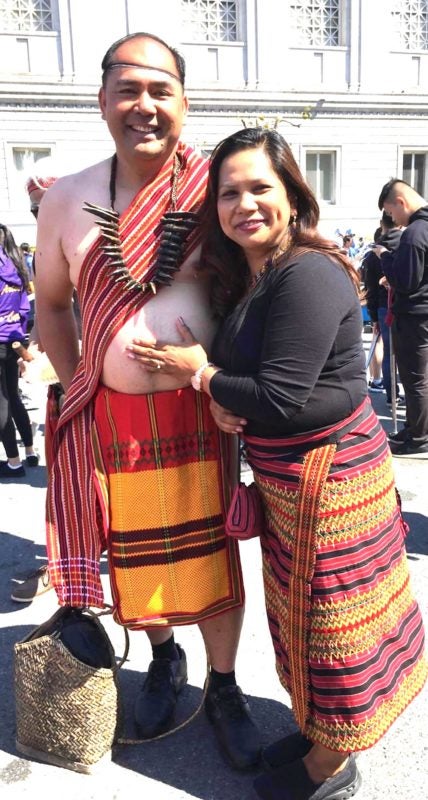 That trait — concern for others — had led to the postponement of Oakes’ earlier plan for indefinite leave; it also influenced his decision to shift back completely to his secular profession.

He had been soul searching for a while and last year took a trip back to the Philippines, where his mother, Theresa Barantes Oakes, 85, lives.

He related his discernment in his farewell homily:

“Covid19 was beginning to spread in the U.S. prior to my return from my sabbatical leave last February. I told the Bishop that I was extending my stay with HCSM during the pandemic in 2020 until the plague receded. But there was no sign of slowing down. I then felt the need to be in service to the vulnerable and elders at home with the mindset that I am being called in the ministry of healing body, mind, and soul.”

His timing was auspicious. At press time almost 400,000 Americans had died from COVID19. Hope rose with the approval of two vaccines but devolved to frustration as the rollout lagged without an effective national strategy. Critical care cases crowd hospitals, further stretching exhausted workers. The dire scenario has encouraged retired doctors and nurses to suit up and get back on duty. The move is a key aspect of the Biden administration’s plan to hasten vaccine distribution and administration to ease the spread of the virus. Eventually.

“The field in which I am re-entering may be challenging and dangerous as I may be dealing with a virus that has taken many lives in the world today. But I believe God is calling me to this ministry, and in responding, I had to ask the permission of my family with whom I gained support.”

The response was logical from his wife Haidee, an RN at Kaiser Permanente in South San Francisco, and their children Joshua, Heather and Hailey Oakes, themselves leaders in the youth and music ministries.

“Their concern was if they could still come to church.  I informed them that the policy for the immediate past vicar to keep distance to enable the successor to establish themselves does not apply to them. The family may join service but not the former vicar.  The new vicar may invite the predecessor or approve a congregant’s request for the past vicar to lead a funeral service, for example,” Oakes disclosed a church guideline.

Quoting the late Robin Williams, he said the Episcopalian faith is often described as “Catholic Lite,” somewhere between Catholic and Protestant belief systems.   Episcopalians and Anglicans have the same origins, he said, unified by West and East Christendom.

“Anglicans were product of the reformation era in the 10th century. It is under the leadership of the Archbishop of Canterbury of the Church of England,” he cited its difference from the Episcopal Church, which he said ” was a product of the American revolution.”

For those unfamiliar, he offered that Episcopalian clergy in America “did not want to be in oath of allegiance to the king of England, so they sought the Apostolic Succession through The Scottish Episcopal Church for the consecration of their first American Bishops: Samuel Seabury, William White and Samuel Provoost.”

The Presiding Bishop, currently The Most Rev. Michael Curry, heads the Episcopal Church.

His surname derives from Beatrice Oakes, an English missionary nurse who adopted his Igorot grandfather Christopher Ngong-o Oakes, he told Inquirer.net. Leonard was born to PH Dept. of Public Highways administrative officer Benedicto and businesswoman Theresa Oakes 50 years ago in July.  He was baptized and raised in the Episcopalian faith.

While a sophomore at the University of Baguio, Leonard set his sights on a degree in Philosophy and later nursing but changed paths when he learned that three classmates were entering the seminary.  He took the entrance exam without informing his parents because he was not sure what would come out of it, he said, being more familiar with the Baptist church although he was an active participant in Diocesan Youth activities.  The surprise was on him when his joyful parents received a letter addressed to them congratulating him for the successful results.

Oakes earned his bachelor’s degree in Theology in 1993 and was assigned to a “remote area” that deepened his knowledge about his indigenous origin.

He talks lovingly about the “beautiful place and people in Conner, Apayao” where “farmers grow banana, coffee, rice and other crops and animals.”

“One of my field assignments was about a 2-hour hike on a hilly and muddy road. They did not have a rectory for me to stay, so I was accommodated by members from house to house, to work and dine with them,” he recalled.

When an Igorot (the ethnic people in northern Philippines) village offers food and water, they are welcoming a son, he shared one of his first lessons about his heritage.

“I always say I’m a proud Igorot because that’s what and who I am,” he explains his propensity for accentuating his identity. “Because people have a misperception of how Igorots look like or how they live.”

The erstwhile HCSM Vicar is one of many Fil-Am Igorots thriving in diverse professions in the United States.  He is president of BIBAK (Benguet, Ifugao, Bontoc, Apayao, Kalinga) of Northern California, an organization providing assistance to members and promotes ancestral pride by showcasing arts, culture and tradition in community and mainstream festivals.

BIBAK welcomed Oakes and made him feel at home when he first arrived.

“Many of us work in the medical and industrial fields. We are proud of our indigenous roots as they keep us united and remind us of our values of humility and industry,” he said.

Leonard would just as soon slip on his handwoven tribal regalia to perform a ceremonial dance at the annual Pistahan in San Francisco as he would his sacred vestments for Sunday service or formal events.

This time he’ll don scrubs as a fulltime nurse at New Haven Home Health Care.  Becoming an RN has no urgency at the moment while he balances his work and volunteering.

Next year, Oakes will assume presidency of the San Francisco Host Lions Club.  He remains a member of ALLICE Alliance for Community Empowerment.

While Haidee, per her husband an “Isneg from Apayao and considered Igorot from the Cordillera region,” supports her husband’s numerous affiliations, she is more comfortable in the background.  They met in Baguio just when she was preparing to immigrate to the US.  They maintained an epistolary romance until they wed in 1994.  Haidee returned to California and Leonard remained in the Philippines to immerse himself in completion of requirements for ordination.  They were reunited in this country in 1997 with Leonard newly ordained to the Sacred Order of Priests.

Half a decade passed before he found his vocation, his footing shaken by the horrific tragedies of Sept. 11, 2001.  From ticketing and gate agent at United Airways, he enrolled in a radiology course at College of San Mateo but was deterred by an aversion to physics.  That’s when nursing appeared as an ideal switch.  By 2005, Oakes had found a rhythm, completed his nursing degree, passed his licensing exam and completed his internship.  He chose to work at a home health care agency “where flexibility of time is abundant.”

This time the situation is reversed, and for crucial cause.

“All this, I believe, is God’s plan.  I must decrease so another will increase.  I am sure I will gain ladder steps in the familiar field I am being called to serve,” he concluded his farewell message.