Trump accused of having pledged release of non-existent vaccine stockpile

Trump accused of having pledged release of non-existent vaccine stockpile 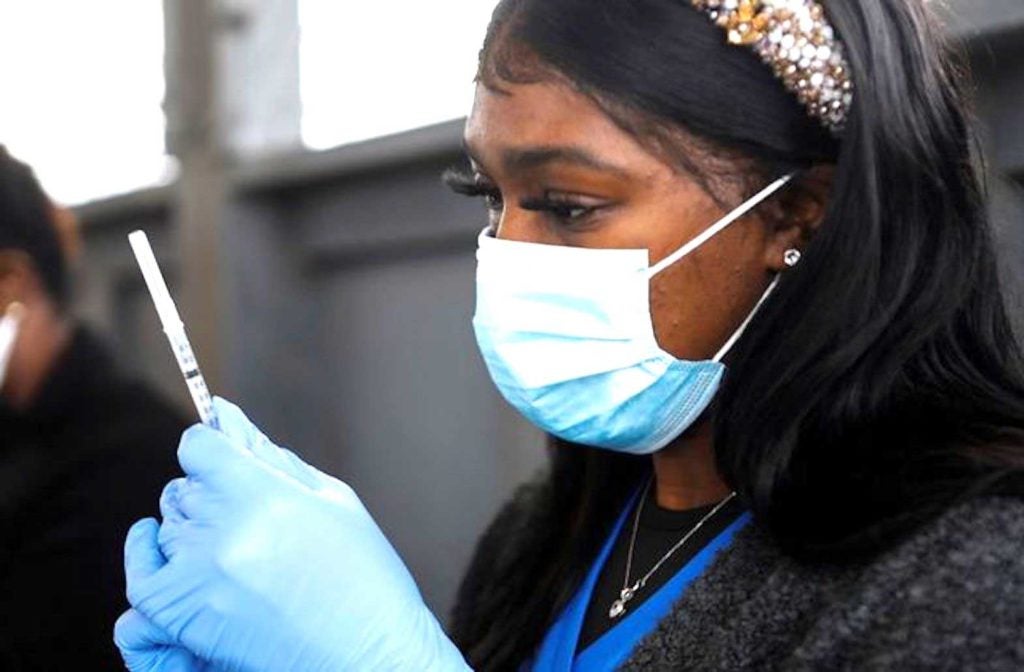 NEW YORK/LOS ANGELES – The governors of several states accused the Trump administration on Friday of deception in pledging to immediately distribute millions of COVID-19 vaccine doses from a stockpile that the U.S. health secretary has since acknowledged does not exist.

Confusion over a vaccine supply windfall that was promised to governors but failed to materialize arose as scattered shortages emerged on the frontlines of the most ambitious and complex immunization campaign in U.S. history, prompting at least one large New York healthcare system to cancel a slew of inoculation appointments.

Just 10.6 million Americans have received a shot since federal regulators last month granted emergency approval to two vaccines, one from Pfizer Inc and BioNTech and a second from Moderna Inc, the Centers of Disease Control and Prevention (CDC) reported.

That tally falls far short of the 20 million vaccinations the Trump administration had promised to administer by the end of 2020, as the COVID-19 pandemic raged virtually unchecked with ever-increasing record numbers of infections, hospitalizations and deaths.

The Pfizer and Moderna vaccines each require an initial dose and a booster shot given about three weeks apart.

Health and Human Services Secretary Alex Azar had said on Tuesday that the administration would release millions of doses it had been holding in reserve for booster shots in order to help spur a sluggish rollout of first doses to those most in need of the vaccine.

Azar said then that the administration was confident enough in the supply chain to release its stockpile, and urged states to use the additional supply to open inoculations to everyone aged 65 and over.

‘DECEPTION ON A NATIONAL SCALE’

Many states obliged, but on Friday a number of governors said they were dismayed to learn that no stockpile existed.

“Last night I received disturbing news, confirmed to me directly by General (Gustave) Perna of Operation Warp Speed: states will not be receiving increased shipments of vaccines from the national stockpile next week, because there is no federal reserve of doses,” Oregon Governor Kate Brown said on Twitter.

“This is a deception on a national scale,” Brown added, demanding an explanation from the outgoing administration.

RELATED: U.S. does not have reserve stockpile of COVID-19 vaccines: health chief Azar

The Washington Post reported on Friday that the federal government ran down its vaccine reserve in late December and has no remaining reserves of doses on hand.

California Governor Gavin Newsom, appearing at Dodger Stadium in Los Angeles for the opening of a mass-inoculation site, said Azar and Vice President Mike Pence had committed on a conference call this week with governors to releasing a vaccine reserve that Newsom said had included some 50 million doses stored in Michigan.

“And then we read, as everybody else, that they have reneged on that, or for whatever reason are unable to deliver on that,” Newsom said.

Brown and Newsom’s comments were echoed by at least eight other governors, most of them fellow Democrats, including Wisconsin Governor Tony Evers, who called the situation a “slap in the face.” Colorado Governor Jared Polis said he was “extremely disappointed” that Azar had “lied to” his state.

Azar suggested in an interview with NBC News on Friday that the doses in question had already been allocated to the states.

“We now have enough confidence that our ongoing production will be quality and available to provide the second dose for people,” the HHS secretary said. “So we’re not sitting on a reserve anymore. We’ve made that available to the states to order.”

Pfizer said it has been holding on to second doses at the request of the federal government and anticipated no problems supplying them to Americans.

“Operation Warp Speed has asked us to start shipping second doses only recently. As a result, we have on hand all the second doses of the previous shipments to the U.S.,” a company spokeswoman said in a statement.

The latest stumble in the vaccine campaign came as the number of known U.S. infections of the virus that causes COVID-19 surpassed 23 million, more than 388,000 of which have proven fatal, according to a Reuters tally.

Adding to anxieties over the pace of immunizations, the CDC warned on Friday that a new, highly transmissible variant of the virus sweeping Britain could become the dominant form in the United States by March.

In New York, the country’s most populous city, Mayor Bill de Blasio said the city has vaccinated about 300,000 of its more than 8 million residents, but was on course to run dry next week because it was burning through vaccines faster than they were being replenished.

In Los Angeles, Governor Newsom joined Mayor Eric Garcetti and other officials in launching a mass inoculation site at Dodger Stadium, an operation they said would be the largest in the nation, administering 12,000 shots a day by next week.

The baseball arena, which had been devoted to drive-through diagnostic testing for months, is one of several vaccine “super stations” opening across California, home to 40 million people and a U.S. epicenter of the pandemic in recent weeks.

President-elect Joe Biden, who takes office on Wednesday, said on Friday he would order increased production of syringes and other supplies to accelerate a vaccine rollout that he has called a “dismal failure.”

He has set the goal of immunizing 100 million Americans, about a third of the population, within the first 100 days of his administration.