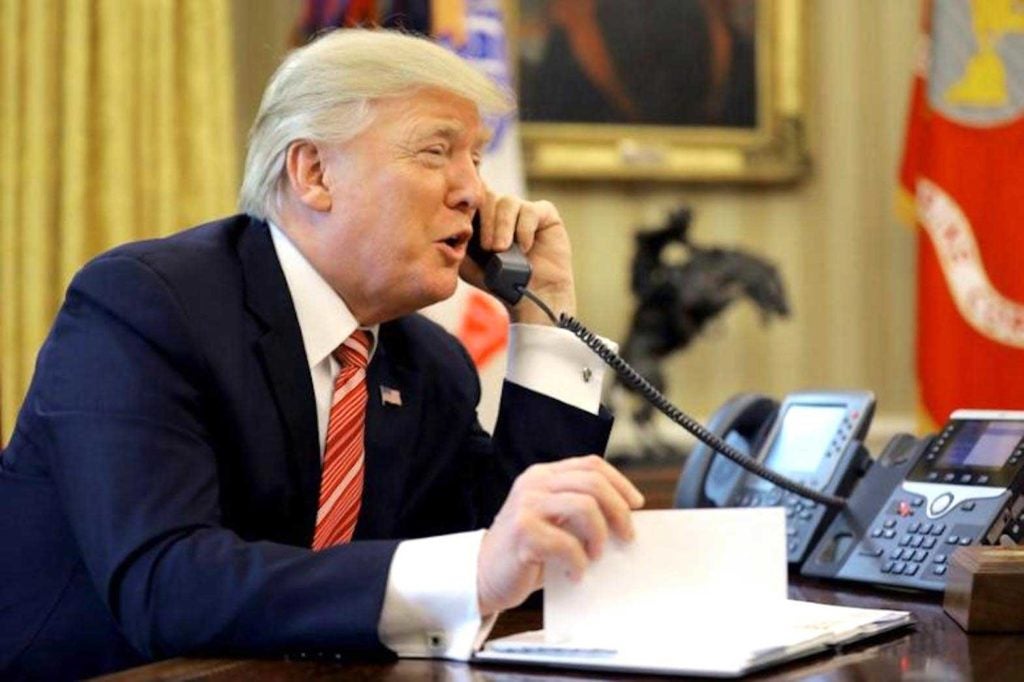 Trump pressured Georgia election officials to find more votes for him so he could “win” the state. REUTERS FILE

It’s not every day that every living secretary of defense in the U.S. goes on record to say the election is over and that the military plays no role in deciding a presidency—not in a democracy.

But that’s just the latest sign that the threat of martial law in the U.S. is more real than not. When Donald Trump is president, who really knows?

My older Filipino American friends who fought and escaped martial law know it when they see it–democracy in turmoil.

Now it’s America’s turn. Can our country survive the closing chapter of the Trump stress test? While hundreds of people  die every day of Covid in the U.S., our nation is dying politically.

That taped call of Donald Trump’s Georgia shakedown  says it all.

Trump claims that ballots were being shredded,  dead people voted, voting machines removed, ballots counted three times, on and on, one wild conspiracy theory after another.

And it’s all coming from the mouth of the man who is president of the United States, at least for the next few weeks. Can we just outlast him?

For more than an hour, Trump can be heard on that call asking the top election official in Georgia to find the 11, 779 votes he believes would win him the state.

The call was made on Saturday and leaked to the press on Sunday. The president’s false claims were  all debunked by Georgia officials Monday.

I’ve listened to the Saturday call a number of times.  All Americans should hear it, over and over, if they love their country.

It should be known as Donald Trump’s official swan song. His final self-disqualifying goodbye. But it could be his  seditious battle cry.

Here’s what I think are the best 17 seconds:

Yes, they’re going to hear Trump trying to use his power to bully Georgia’s Secretary of  State Brad Raffensperger and his group into overturning the election.  Said Trump: “And you’re Republicans.”

Trump even threatens them with possible criminal charges for not doing his bidding.

To their credit, Raffensperger and the Georgia officials stand their ground and tell Trump that his information is wrong, and that the state’s election numbers are verified and correct.

The Georgia officials’ simple truth strips Trump’s power and  leaves the soon to be ex-president begging pathetically on the call  for the votes to be overturned: “Fellas, I only need 11,000 votes, give me a break.”

Maybe it’s Trump auditioning for a Martin Scorcese movie. This is the president of the United States acting like a con begging a loan shark for extra time.

Or maybe pleading to a more formal shark, the lender that gave him the $400 million dollars that will be due soon when he’s merely  private citizen Trump.

Or maybe it’s just the precursor to the Trump whine we’ll hear as he fights off all the court proceedings that he’s dodged as he goes from sitting president to sitting duck.

Still, it’s disgusting to hear the man who holds the highest and most revered job in the world,  groveling in desperation.

He’s already lost the election—both the popular vote and the electoral college. And yet he continues to defame himself and the presidency and democracy by showing just how corrupt and venal he is.

Rep.  Bobby Scott (D-VA)– the part Filipino American member of Congress– said this over the weekend: “Trump tried to coerce and threaten election official into overturning an election he lost. This behavior is a dangerous threat to democracy and warrants a criminal investigation.”

That investigation certainly would be more warranted rather than the call for yet another vote audit/investigation t by the core group of gutless Republicans led by Ted Cruz.

They are the ones hanging  on to Trump’s tarnished  coattails. But at what cost? It’s turmoil that easily could lead to unrest if people don’t come to their senses soon. But all Trump knows is chaos.

Trump’s  insistence of election fraud has split the Republican party into those who believe rightly that he’s a delusional thug, and those who feel he’s a victim of a crooked system.

Democrats ruling both the House and Senate  won’t lead to what many Americans may instinctively fear—rule by an unruly left wing cabal.  Far from it.  The Democrats are far more moderate and corporate, and represent  the only way to recover from a debilitating four years, if you want to  get back to a rational  democracy with civil norms.

You know, liberty and justice for all.

But if Tuesday’s runoff election  goes badly for Republicans, it may deepen Trump’s  desperation, as Congress looks to certify the presidential election on Wednesday.

On the same day Congress acts, a rally will be staged in Washington by the “Proud Boys,” essentially  Trump’s “militia.” It  could become unruly.

Trump still has cards to play. His use of pardon on the friends, himself and family plan would be the last card, but he still has the military option—to force a new election by declaring martial law in America.

How real is the threat?  Like I said, why would all ten living former secretaries of defense including Dick Cheney, and two Trump appointees Mattis and Esper, sign onto a statement declaring that the election is over and that the military should play no role at this point?

Tension mounts in the final weeks of what could be the worst presidency in American history. Just keep playing that loop of Trump begging Georgia officials to overturn the election.

It’s a desperate Trump with nothing left to lose but is primed to expose the precarious state of American democracy for all the world to see.

Emil Guillermo is a journalist and commentator who has covered Washington and the nation. He writes a column for the North American Bureau. See his vlog at www.amok.com