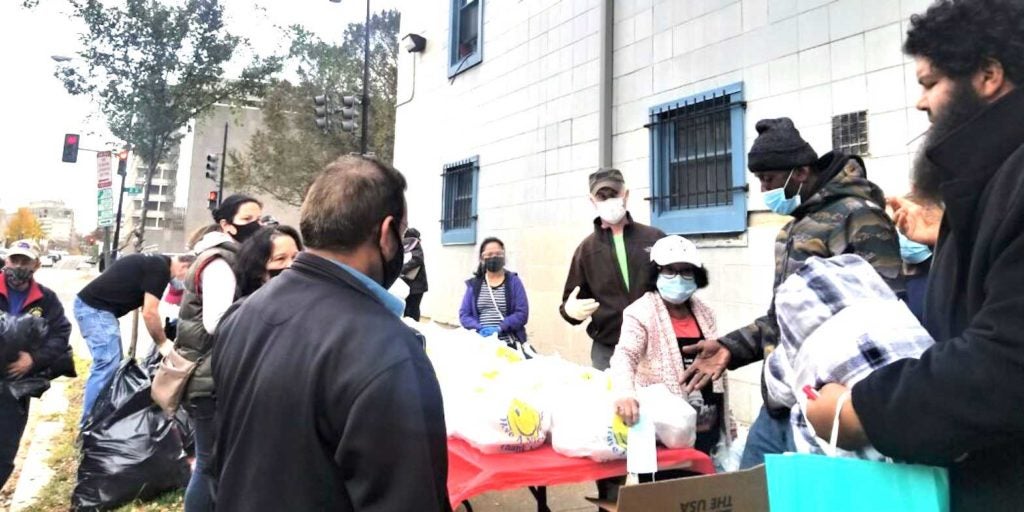 Thelma Añonuevo Billy (third from right) has been serving the homeless in the nation’s capital for the past 26 years. MANILA MAIL

WASHINGTON – Her name is Thelma Añonuevo Billy, but residents of homeless shelters in the nation’s capital call her “Mama.” For the past 26 years, the Fairfax, Virginia mom has been providing free meals to the homeless, at first on her own, and later with the help of church and civic groups, as well as close friends.

This year of the pandemic, Thelma, 76, has not let age or COVID-19 strict protocols slow her down.

Every Wednesday, rain or shine, Thelma would load the family van with packed lunches, and drive from her home in Alexandria to a homeless shelter in Washington, D.C. She would park her van on the corner of 2nd and E streets near Capitol. There, she would be warmly greeted by “my children, my extended family.”

Thelma’s weekly feeding program has taken a toll during the pandemic as Covid-19 protocols have to be followed. She and her friends are not allowed to serve inside the facility. So, Thelma’s friends go to her house early in the morning to prepare the individual packed lunches and drinks.

From One to Many

It all started when Thelma arrived in Washington, D.C. from San Diego, California in the early 1990s. She ventured on her own to the city, got lost and ended up at Lafayette Park, across the White House. As she was looking around, she was surprised to see a homeless man rummaging through the trash can for food. 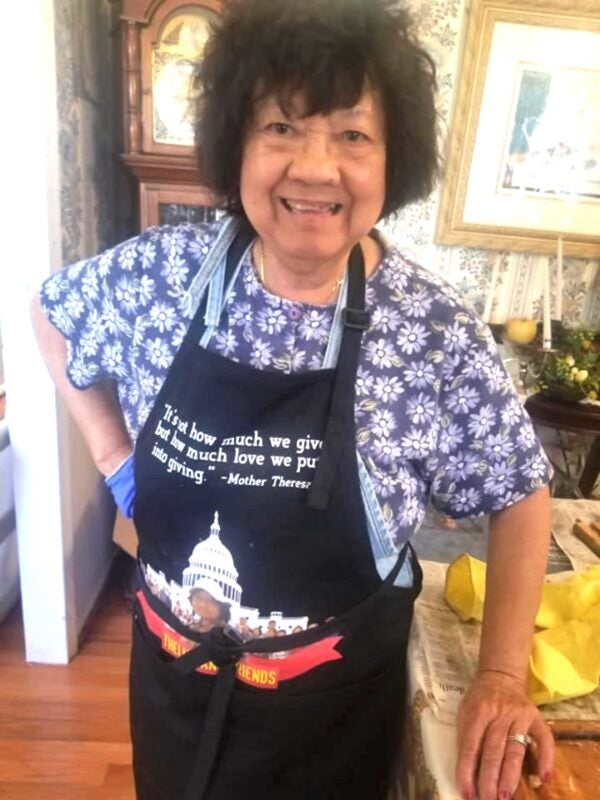 Thelma has never wavered in her mission to serve the homeless. MANILA MAIL

She asked him why he was doing that. He told her he was hungry and homeless. So Thelma invited him to a food truck nearby and bought him a hotdog sandwich and soda. During the two hours she was at the park, she saw other homeless people talking to him.

When she got home, she couldn’t eat, and her husband, George, a retired Naval Officer, asked her why and she told him the story. A few days later, she packed five prepared lunchboxes and went to the same park. The man was there, and so were others like him. Then week after she week, Thelma would do the same, and the number of the hungry and homeless people grew.

Sometime in 1995, Thelma and a few friends turned their attention to the Dupont Circle Park. They would set up tables and serve lunch to whoever wanted to partake of the meals.

They did not know that the Park Police had banned homeless people from sleeping around the perimeter. The police officers arrested her on the spot for serving food in public without a permit. She tried to explain. But they did not let her go as she did not have any identification card with her, or her driver’s license.

The homeless people asked the police officers to let her go but, she was put in handcuffs. They confiscated all her food and threw them in the trash cans. The news media learned of the situation, and Thelma was in the 6 p.m. news. There she was, an Asian woman in handcuffs in a police car on the way to jail. The reporters interviewed the homeless people, who told them “Mama” was their savior as she had been providing meals for them.

Thelma was out on bail for $100. None of the stuff she used for serving was returned.

The next day, black limousines were on her driveway. Then-Secretary of Agriculture Dan Glickman knocked on her door. He handed her a thank you letter from President Bill Clinton. Thelma was also reimbursed for the $100 bail fee.

The day was also Glickman’s birthday and she handed her a check for $1,000 and told her to buy food for the homeless. Thelma told them she could not accept the check as she was not a non-profit organization.

So the Secretary and his staff went to a nearby grocery store and bought over a thousand dollars’ worth of groceries. When they went back to the house to deliver the groceries, reporters were waiting. One of the reporters gifted her with a new oven/stove as hers was old . 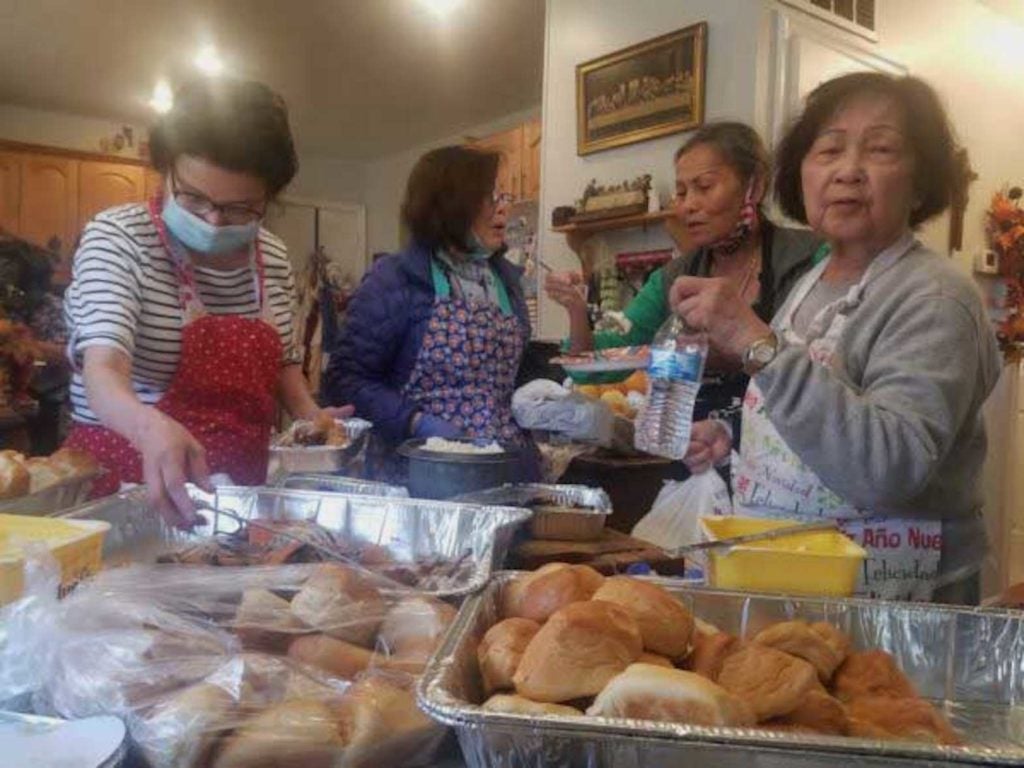 Also that day, White House staffers pooled their money for an additional $3,000 for a few months’ worth of groceries to feed the homeless. During that time, it had grown to at least a hundred daily.

On special occasions such as Thanksgiving, Thelma and friends cooked turkey, baked chicken, side dishes, salads, assorted desserts, and drinks. An Indian American organization, which had been with them for years, donated blankets.

A feast for 600 individuals was prepared for the shelter, and another one hundred for the Mother Theresa’s home, also in D.C. Occasionally, Thelma brought lunch for the Lamb Center in Fairfax.

Zeny Phillips, a 61-year-old mom from Fairfax, Virginia, joined Thelma and friends many years ago. She is an active member of the Legion at the Leo Parish Church in Vienna, Virginia.

“It is not only a passion, but also a mission to help the less fortunate,” said Zeny. Through her church, she collects contributions from members and other friends. She helps cook dishes and assembles food packs together with the other members.

Thelma and Zeny also have projects in South Cotabato, Philippines. They are building homes and two churches for families who have been displaced during the devastating earthquake almost two years ago. Zeny was born and raised in Sultan Kudarat, Cotabato. Thelma was originally from Pabica, Negros Occidental.

Imelda McAllister of Herndon, Virginia, started joining Thelma more than eight years ago. She said, “I am just thankful I can help others less fortunate. It gives me satisfaction when I can provide for others. I want my kids to learn about helping the needy, so sometimes I would bring them along.” 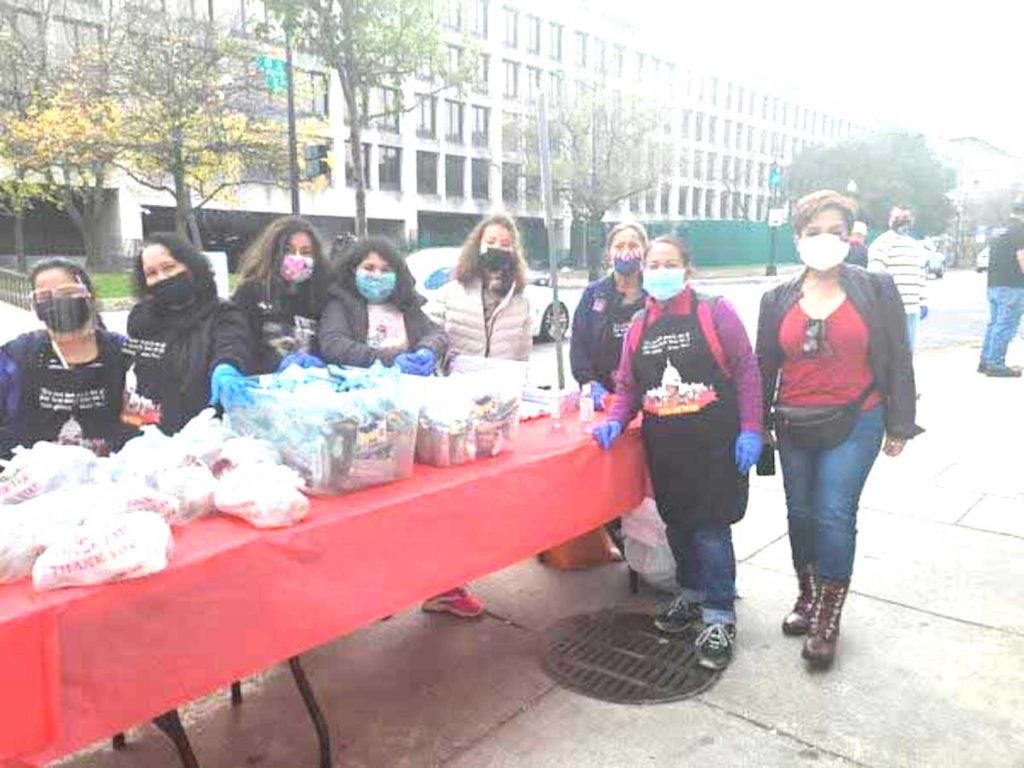 A retired World Bank staffer, who wants to remain nameless, said, “I help Thelma because I know about her passion to help the less fortunate.  Thelma has been a good family friend for many years. I admire her greatly for her compassion for others.”

The Knights of Columbus and the Legion of Mary are two of the organizations that support Thelma’s mission. Several volunteers would come to her house during the week of big feeding holidays like Thanksgiving, Christmas, and Easter Sunday.

Alma Conty, a retired World Bank staffer, has known Thelma for over 30 years. Although they don’t see each other often, over the years Alma has continued to support Thelma in her work here and in the Philippines.

Remarked Alma: “Thelma is a unique person whose heart is bigger than her size. She’s very admirable for all the things she does for the less fortunate, but more so in the Philippines.”

Thelma, a devout Catholic and a follower of Mother Theresa, is a doer and a giver. One of her favorite Mother Theresa quotes is: “It is not how much we give, but how much love we put in giving.”