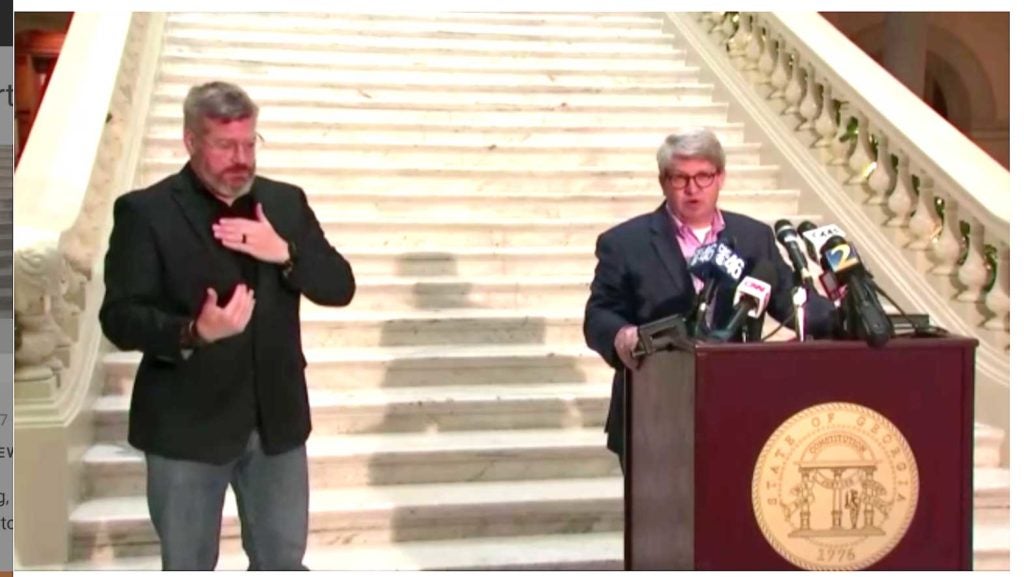 Gabriel Sterling (right), the Republican manager of Georgia’s voting systems, spent much of a press conference on Thursday debunking false claims related to November’s presidential election and said continuing disinformation was creating a “threat environment” in his state. SCREENSHOT/REUTERS

“What Texas is doing in this proceeding is to ask this court to reconsider a mass of baseless claims about problems with the election that have already been considered, and rejected, by this court and other courts,” Josh Shapiro, Pennsylvania’s Democratic attorney general, wrote in a filing to the nine justices.

Texas filed the long-shot suit against the four election battleground states on Tuesday directly with the Supreme Court. It asked that the voting results in those states be thrown out because of their changes in voting procedures that allowed expanded mail-in voting during the coronavirus pandemic.

Trump’s campaign and his allies already have been spurned in numerous lawsuits in state and federal courts challenging the election results. Legal experts have said the Texas lawsuit has little chance of succeeding and have questioned whether Texas has the legal standing to challenge election procedures in other states.

Biden, a Democrat, defeated Trump in the four states in the Nov. 3 election. The Republican president won them in the 2016 election.

The Texas lawsuit, Shapiro wrote, was adding to a “cacophony of bogus false claims” about the election.

Trump has falsely claimed he won re-election and has made baseless allegations of widespread voting fraud. State election officials have said they have found no evidence of such fraud.

Dana Nessel, Michigan’s Democratic attorney general, listed the many cases filed in that state that Trump and his backers have lost.

“The challenge here is an unprecedented one, without factual foundation or a valid legal basis,” Nessel wrote in Michigan’s filing.

Chris Carr, Georgia’s Republican attorney general, said Texas cannot show it has been harmed by the election results in other states.

“The novel and far-reaching claims that Texas asserts, and the breathtaking remedies it seeks, are impossible to ground in legal principles and unmanageable,” Carr wrote in Georgia’s filing.

Josh Kaul, Wisconsin’s Democratic attorney general, noted that Trump already had obtained recounts in the two most heavily Democratic counties in the state, showing no problems with the results.

“There has been no indication of any fraud, or anything else that would call into question the reliability of the election results,” Kaul wrote in Wisconsin’s filing.

Trump filed a motion with the court on Wednesday asking the justices to let him intervene and become a plaintiff in the suit filed by Ken Paxton, the Republican attorney general of Texas and an ally of the president. Trump met on Thursday with Paxton and other state attorneys general who support the suit.

Twenty states joined the District of Columbia in filing a brief lodged by Democratic officials on Thursday backing the four states targeted by Texas. Seventeen other states on Wednesday filed a brief urging the justices to hear the case in filings by Republican officials. Arizona filed its own brief signaling an interest in the case without explicitly taking sides.

“The Supreme Court has a chance to save our Country from the greatest Election abuse in the history of the United States,” Trump wrote on Twitter on Thursday, repeating his unfounded allegations that the election was rigged against him.

The Texas lawsuit does not make specific fraud allegations. Instead, Texas said changes to voting procedures removed protections against fraud and were unlawful when the reforms were made by officials in the four states or courts without the approval of the states’ legislatures.

Democrats and other critics have accused Trump of aiming to reduce public confidence in U.S. election integrity and undermine democracy by trying to subvert the will of the voters.

One Republican state attorney general, Dave Yost of Ohio, filed a separate brief on Thursday disagreeing with the Texas proposal that votes be tossed out, saying that it “would undermine a foundational premise of our federalist system: the idea that the States are sovereigns, free to govern themselves.”

Texas asked the Supreme Court to immediately block the four states from using the voting results to appoint presidential electors to the Electoral College and allow their state legislatures to name the electors rather than having the electors reflect the will of the voters. All four of the targeted states have Republican-led legislatures.

Biden has amassed 306 electoral votes – exceeding the necessary 270 – compared to Trump’s 232 in the state-by-state Electoral College that determines the election’s outcome. The four states contribute 62 electoral votes to Biden’s total.