ICE trying to deport Filipina, a U.S. citizen, who is a witness to detention abuse

ICE trying to deport Filipina, a U.S. citizen, who is a witness to detention abuse 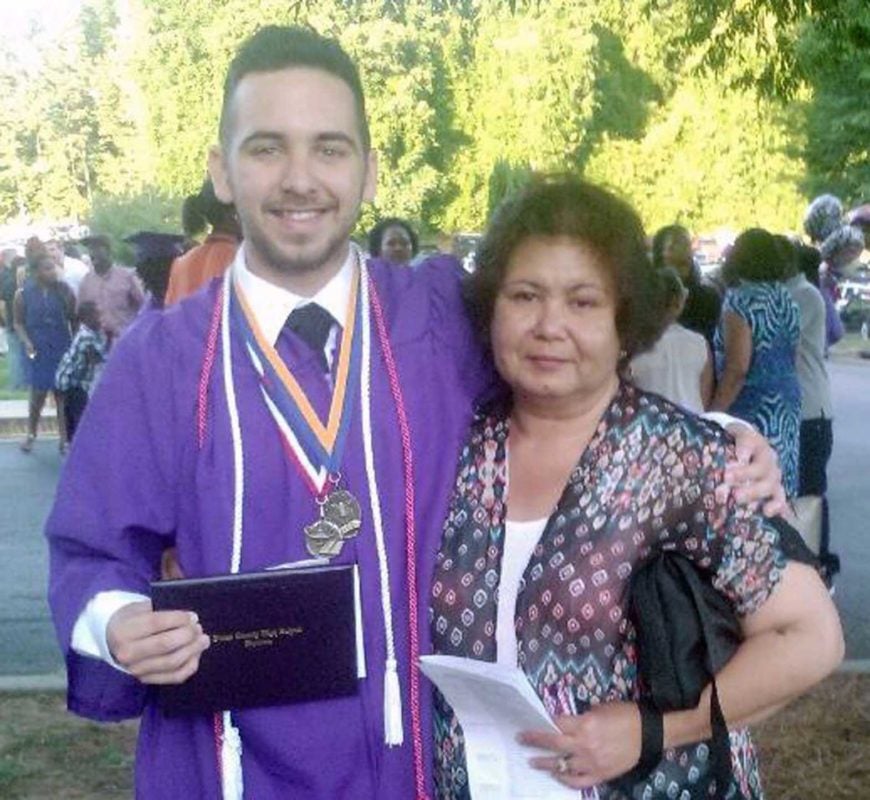 Alma Bowman with her son at his graduation from Jones County High School in 2015. Although a U.S. citizen, she is being held for deportation by the Immigration and Customs Enforcement agency. BOWMAN FAMILY

ICE is attempting to deport several witnesses, including a Filipina who is a U.S. citizen, who can testify against a gynecologist who performed allegedly unnecessary or overly aggressive surgeries on immigrants at a Georgia immigration detention facility.

Alma Bowman, 54, who is in U.S. Immigration and Customs Enforcement custody, was scheduled for deportation on Monday, Nov. 9. Bowman has been a key witness for attorneys and journalists in the alleged medical abuse case at the ICE detention center. Her lawyer says she is also a U.S. citizen. Bowman’s deportation was halted by Monday afternoon and she has been returned to detention.

“A 43-year resident of this country with compelling evidence that she is a United States citizen, Ms. Bowman is a material witness in ongoing Congressional and DHS investigations into human rights violations at the ICE Irwin County Detention Center,” Rep. Hank Johnson, D-Ga., told The Intercept. “To deport her before she has been interviewed would have been a gross obstruction of justice.”

Born in 1966 in the Philippines, to a U.S. citizen father who was serving in the Navy and a Filipina mother, Bowman moved to the U.S. with her parents as an adolescent. “I always thought that I was a citizen of the United States,” Bowman said. She has two U.S. citizen children and is married to a U.S. citizen, from whom she is separated.

In September, a whistleblower who had worked in an Immigration and Customs Enforcement facility in Georgia, alleged there had been a high rate of hysterectomies and medical neglect. A nurse identified as Dawn Wooten filed the complaint to the Department of Homeland Security inspector general. The complaint. A spokesperson for ICE said in a statement that the agency “does not comment on matters presented to the Office of the Inspector General.”

At least 19 women have alleged medical abuse, including hysterectomies and other procedures affecting fertility, at the ICE detention center in Georgia, according to a new @latimes report. Mexico identified at least 2 women forced to have surgeries. One was given a gynecological surgery and denied post-operative care.

Bowman said she told both an ICE officer and more than one immigration judge in the past three years about her citizenship. “They didn’t believe me, and I got it in my head that maybe I wasn’t.” One ICE officer, she told The Intercept, questioned whether the man who raised her as his daughter was actually her biological father. Her birth certificate, which The Intercept was able to review, names her father, a U.S. citizen. Her maternal grandfather was also a U.S. citizen.

Without an attorney, Bowman represented herself in immigration court until this week. After nearly half a year in Atlanta City Detention Center, she was transferred to Irwin, Georgia and held there for more than 30 months until last week, when she was transferred to Arizona in preparation for her deportation.

After attorneys with the Georgia Latino Alliance for Human Rights, or GLAHR, began representing her last week, they discovered that Bowman is, in fact, a U.S. citizen. The Intercept was able to review her records, including birth certificates, marriage contracts, and immigration forms related to her citizenship.

“For 43 years, immigration officials had access to her birth certificate, listing her father as a U.S. citizen, and her parents’ marriage certificate, since the documents were submitted when her father filed a petition for her to immigrate to the United States,” Van Huynh, Bowman’s lawyer from GLAHR, said. “ICE had enough information that they could’ve looked into the matter and raised the possibility of her status as a U.S. citizen in court. But that was never done.”