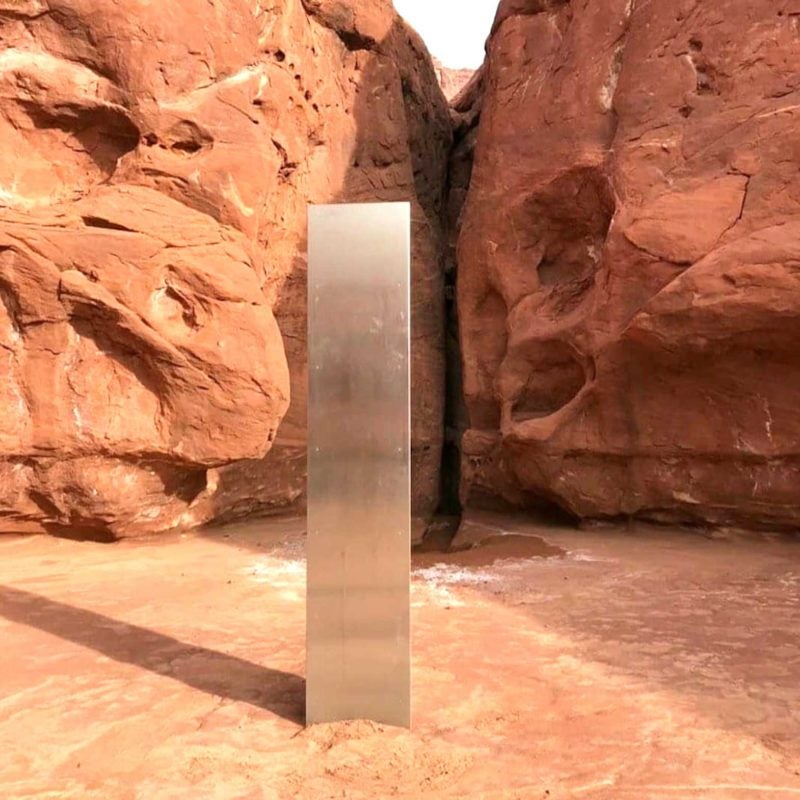 They were on a mission to count sheep when they found something they had not counted on.

As a Utah helicopter crew buzzed over the southeastern part of the state looking for bighorn sheep last week, sitting beneath them in the middle of the desert was a bright shiny monolith, the stuff of sci-fi sagas.

Pilot Bret Hutchings of the state Department of Public Safety recalled someone on board spotting the gleaming metal object firmly implanted in a small clearing set against the redness of the rocks and sand below.

After Hutchings set their helicopter down in the remote area, which remains undisclosed to discourage a rush of gawkers, they got a closer look, but found “no obvious indication” of how it got there, the public safety department said.

Hutchings joked about the object’s possible other-worldly origins and the obvious parallel to the classic 1968 Stanley Kubrick film, but thought the answer was more down to Earth.

“I’m assuming it is some new wave artist or something, or somebody who just is a big ‘2001: A Space Odyssey’ fan,” he said.

In the film, an alien monolith is a recurring symbol that appears to play a key role in man’s evolution from the apes.

Whatever the Utah object’s origins, it has fired up the minds of conspiracy theorists and sci-fi fans on social media.

“Finally someone gets it!” said Twitter user Dwight Jackson of Calgary, Alberta. “This is the 2020 reset we’ve been waiting for! Where is the mothership…?”

The U.S. Bureau of Land Management, which owns the land, declined to comment late on Tuesday on its investigation into the matter.

But it issued a reminder on Twitter that “using, occupying, or developing the public lands or their resources without a required authorization is illegal, no matter what planet you are from.”