In a Trumpulent America, Filipinos and white supremacy 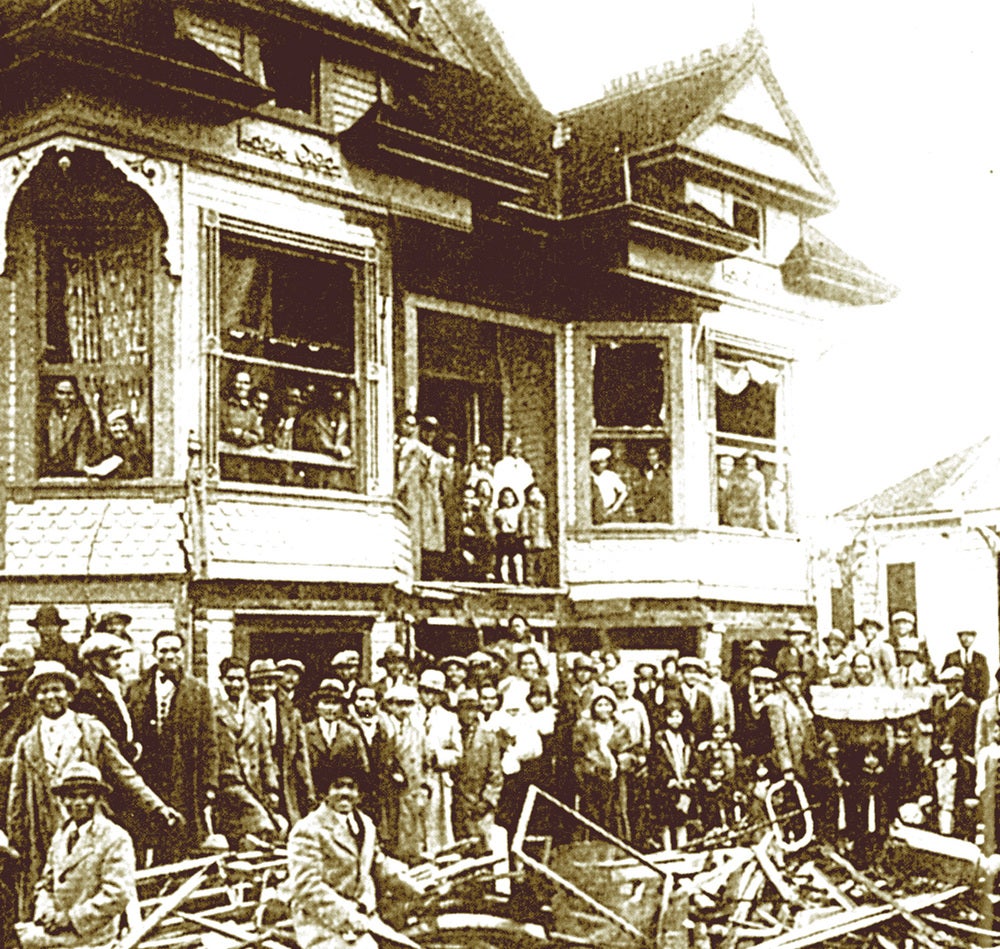 Filipinos pose before the ruins of their bombed-out clubhouse in Stockton, California in 1930. FANHS

There’s a crisis in America, but it’s not about the mad man in North Korea.

It’s about the insensitive, racist bully in the White House—the president of the United States.

I used to joke that the Philippines’ Rodrigo Duterte and Trump were on their own race to the bottom. After the Charlottesville, Virginia, incident even with the hero’s burial of Marcos and thousands of extrajudicial killings, Duterte can’t go lower than Trump now.

How do you go lower than defending racism? I suppose you can advocate genocide like a Pol Pot, but extrajudicial killings aren’t quite there. At least not yet.

But Trump? He’s given the thumbs up to racism in America.

On Saturday, Trump’s initial reaction was to spare the KKK, neo-Nazis and white supremacists and to spread the blame to “many sides.” After the civil rights community and other critics slammed him Sunday, Trump took a mulligan. On Monday he dutifully read off a prompter and denounced the hate groups (albeit in as insincere a manner as he could stomach).

But by Tuesday, Trump couldn’t help himself. He had to be Trump. He went back to his Saturday stance, and said in more off-the-cuff remarks that there were fine people on both sides. He spoke from the heart and defended his initial remarks. In doing so, he legitimized the racist hate-mongers in Charlottesville. Essentially, Trump told them he had their back.

It’s one thing to back the free speech rights of the abhorrent. But it doesn’t mean you have to defend their philosophy of division and hate.

We live in a United States that believes in freedom and justice for all.

Suddenly, the president was giving cover to the KKK, neo-Nazis, and white supremacists who were armed and wreaked havoc on Charlottesville. A woman was killed and 19 were hurt when one of the white Supremacists drove his car into the crowd. Two law enforcement officers died in a chopper accident as they mobilized to protect the public.

That Trump couldn’t bring himself to condemn the alt-right bigots is troubling.

But this is his brand. In real estate, that brand signifies his version of opulent luxuriousness. But now that Trump is in public office for the first time (and right at the top), I’ve coined a word to capture the Trump style of government and political rhetoric.

Take one part truculent (“the quality of being disposed or eager to fight or engage in hostile opposition”); add a dash of petulance (“insolent and rude behavior”); insert one Donald (orange hair special); mix with reckless abandon, et voila!

And, of course, it’s the likes of which we’ve never seen before.

Unless you see it in your neighbor, or in Charlottesville, Virginia.

A president is capable of setting the moral tone of the country. And so far, this one’s setting a bad example. It’s enough that it poses a real threat to our democracy. Maybe even more than the Russia probe, or ISIS, or anything else.

Trump has used the politics of division to shore up his declining support. But in doing so, he’s given the green light to gun-toting white supremacists prone to anger and violence.

When you see whites bearing torches, marching through the South saying, “You will not replace us,” you better believe that when they say “you,” they are including Filipinos.

The last few months I’ve been paying homage to my father in my one-man show, ‘Amok.’ He arrived in 1928 in America, just two years after the first recorded incidence of anti-Filipino violence in the U.S.

It happened on New Year’s Eve, 1926 in Stockton, California, and it was the main reason my father stayed put in San Francisco and didn’t go to the Central Valley.

According to Prof. Dawn Mabalon’s Little Manila is in the Heart, the Stockton incident involved eight whites and Filipinos who were stabbed and beaten after a group of white men rushed through hotels and pool halls looking to attack Filipinos.

The anti-Filipino violence by whites only grew from there. Even lynchings of Filipinos were recorded. And the violence influenced politicians who delivered hateful anti-Filipino legislation.

The U.S. had fallen into a deep depression. Whites were out of work. “Fils” as they were called were replacing whites on the job.

On top of that, Filipinos, predominantly male to meet the work demand, were taking white women.

The most famous riot was in Watsonville on January of 1930. Whites were upset that Filipinos held a dance and hired nine white girls. A white mob started shooting and beating Filipinos. Four days of violence ended in the shooting death of Fermin Tobera on Jan. 22. It sparked a wave of violence in the following weeks, and even caused students to demonstrate at UP and memorialize Tobera.

So don’t see Charlottesville as simply a black/white issue.

We have seen the white supremacist violence before. And we have seen what happens because of that violence.

Because the anti-Filipino sentiment was so strong in California, Congress passed the Tydings-McDuffie Act in 1934. It turned the one time American nationals into aliens and essentially excluded Filipinos from the U.S.

That’s what a little hate can do.

When racist hate is legitimized by the president of the free world—it is not an overstatement to say democracy is in real trouble.

It’s a sad day in this country when the president, to whom we look for moral leadership, is a victim of his own poisoned rhetoric.

It’s crippling his ability to govern. And it’s showing Americans and the world an ugliness that forever tarnishes the presidency.

WWLD? What Would Lincoln do? Probably pull down the brim of his stovepipe hat and shake his head, if not weep.

We are witnessing the devolution of the presidency, and the downgrading of our country.

The Donald has given us a Trumpulent America.

Emil Guillermo is an award-winning journalist and commentator. Listen to his Inquirer.net podcasts: http://inquirer.libsyn.com/