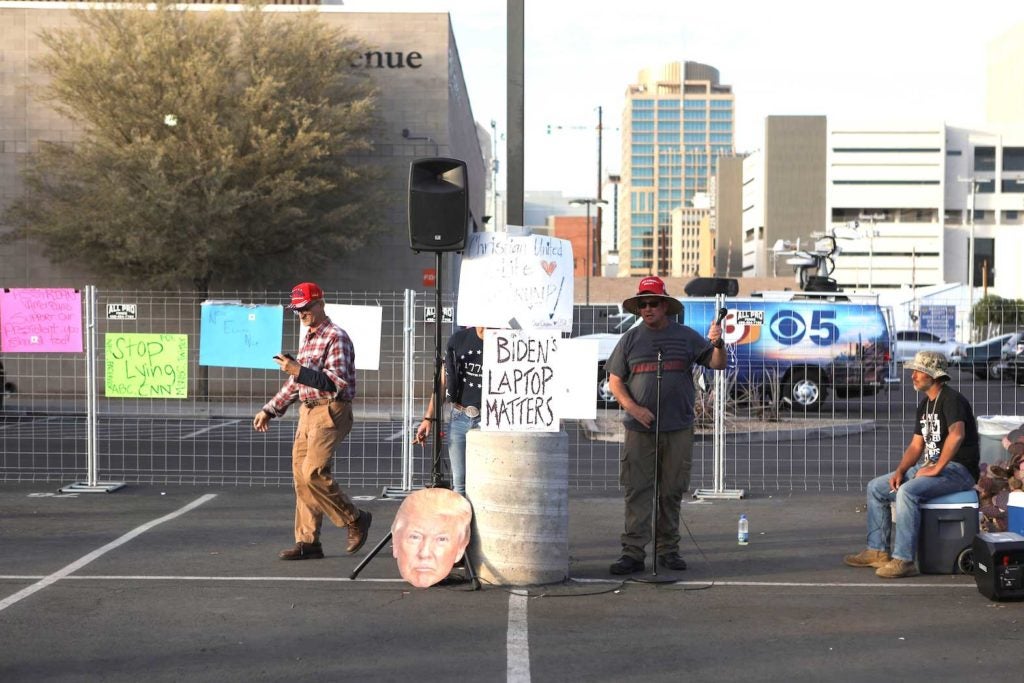 President-elect Joe Biden cemented his U.S. election victory by capturing the battleground state of Arizona late on Thursday, but the official transition to his administration remains stalled as President Donald Trump refuses to accept defeat.

Biden was projected to win Arizona after more than a week of vote counting from the Nov. 3 election, Edison Research said. He becomes only the second Democratic presidential candidate in seven decades to win the traditionally Republican state.

Biden’s win in Arizona gives him 290 electoral votes in the state-by-state Electoral College that determines the White House winner.

On Saturday, Biden had already cleared the 270-vote threshold to win the election, setting him on course to be sworn in on Jan. 20. Arizona’s 11 additional electoral votes put any longshot challenge by Trump even further out of reach.

Biden also holds a lead of more than 14,000 votes in the uncalled state of Georgia, a margin that is nearly certain to survive a manual recount. Although the national popular vote does not determine the outcome, he is winning that by more than 5.3 million votes, or 3.4 percentage points.

Trump, a Republican, has claimed without evidence that he was cheated by widespread election fraud. State election officials report no serious irregularities and his legal challenges have failed in court.

To win a second term, Trump would need to overturn Biden’s lead in at least three states, but he has so far failed to produce evidence that he could do so in any of them. States face a Dec. 8 “safe harbor” deadline to certify their elections and choose electors for the Electoral College, which will officially select the new president on Dec. 14.

In Michigan, where Biden won by 2.6 percentage points or more than 148,000 votes, two Republican state senators have asked the state’s top election officials to audit the results before certifying them.

They cited a “glitch” in vote-counting software, allegations that ballots were mishandled, and impediments to poll-watchers.

“These claims deserve our full attention and diligent investigation to ensure fairness and transparency in our election process,” Lana Theis and Tom Barrett said in a letter to Secretary of State Jocelyn Benson.

Federal election security officials have found no evidence that any voting system deleted or lost votes, changed votes, “or was in any way compromised,” two security groups said in a statement released on Thursday by the lead U.S. cybersecurity agency.

While Republicans in the United States have questioned the outcome, U.S. allies around the world have recognized Biden’s victory since Saturday. Rival China on Friday became the latest country to congratulate Biden, leaving Russia and Mexico as conspicuous holdouts.

Trump’s refusal to accept defeat has stalled the transition. The federal agency that releases funding to an incoming president-elect, the General Services Administration, has not yet recognized Biden’s victory.

Biden’s pick for White House chief of staff, Ron Klain, told MSNBC on Thursday that starting the transition is particularly crucial now, as the Biden administration will inherit a coronavirus vaccination campaign as soon as he takes office.

Regardless of the impediments, Biden will sign a “stack” of executive orders and send high-priority legislation to Congress on his first day in office, Klain said.

“He is going to have a very, very busy Day One,” Klain said, citing a return the to Paris accord on climate change, immigration reform, strengthening the “Obamacare” healthcare law and environmental protection as issues Biden would address on Jan. 20.

Biden was set to meet with transition advisers again on Friday as he maps out his approach to the pandemic and prepares to name his top appointees, including cabinet members.

Most Republicans have publicly said Trump has a right to pursue court challenges and declined to recognize Biden as the winner. But more signs of dissent began emerging on Thursday.

Meanwhile, a number of Republican senators said the Trump administration should allow Biden to receive classified intelligence briefings, though they stopped short of explicitly calling him the winner.

Democrats have assailed Trump, and the Republicans giving him cover, for undermining the country’s institutions. In an interview that will air on CBS’ “60 Minutes” on Sunday, former President Barack Obama said Republicans were walking a “dangerous path” by endorsing Trump’s baseless claims of voter fraud.