Trump does a Marcos, tries to dictate election outcome

Trump does a Marcos, tries to dictate election outcome 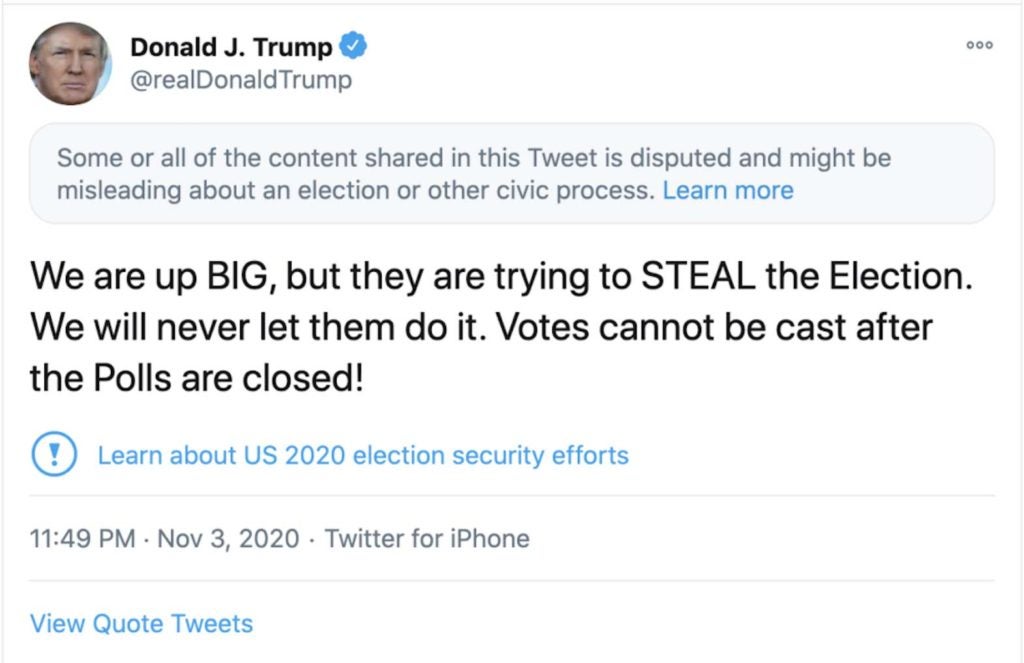 One of Trump’s election night tweets, flagged with a Twitter warning.

It was still fairly early on election night. Not quite midnight for us on the West Coast, just as the late night jokers would start. But this was the president of the United States, doing his best Marcos impression. Oh, let’s just update that to Putin.

He’s been watching TV and admiring his close win in Florida, a more decisive win in Texas, and leads in North Carolina and Georgia. But he questioned the vote count around Arizona, and  was upset when one network actually gave Arizona to his opponent.  It couldn’t be because election officials actually counted votes.

“You know what happened,” said Donald J. Trump from the East Room of the White House. “They knew they couldn’t win, so they said, let’s go to court.” 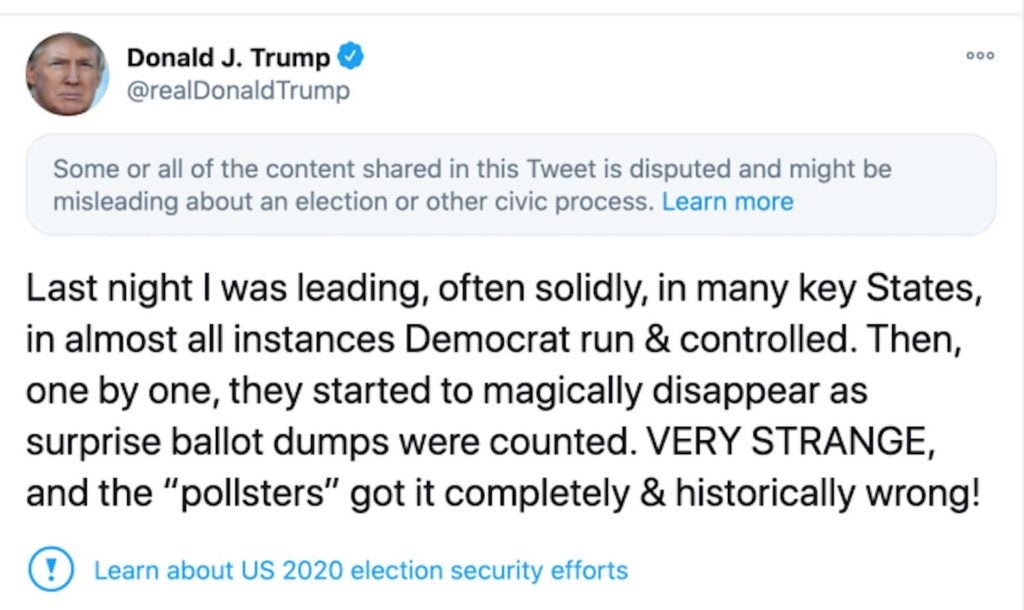 Who “they” is isn’t clear. But it was Trump speaking from his 2 a.m. in the morning vote count delirium. When things stalled, probably because mail-in ballots take time, he started to question. Then he attacked.

He got cheers from the 250 in the east room, not the night’s magic number 270. And then he went even further.

“Our goal now is to ensure the integrity,” he said, though really, he could insure it just by shutting up.

“For the good of this nation, this is a very big moment. This is a major fraud in this nation,” Trump went on. “So we’ll be going to the U.S. Supreme Court. We want all voting to stop. We don’t want them to find any ballots at four o’clock in the morning and add them to the list.”

Here is the commander-in-chief saying, “Stop the election!” Of course, when he’s ahead. What he’s doing is saying, “Stop Democracy!”

It’s the president of the United States declaring the millions of legitimate votes that states were still counting were invalid.

He was the autocrat rigging his own election. Trump can’t do that. Let’s count the votes.

No one could believe what the president said.  Not even his vice president. Not even confidants like former New Jersey Gov. Chris Christie. Time for all good Republicans to come to the aid of their country?

That was a moment that if you were awake you’ll never forget. The White House as the Malacanang of Marcos. A president of the United States trying to dictate an election?

We cannot erase that from our memories. File it under, “This should never happen ever in America.”

Early next morning, Wisconsin held a news conference announcing how it had counted the in-person ballots first, then the mail-ins, which tend to be Democratic voters. Then it released numbers from  large urban centers like Milwaukee, and that seemed to  put Biden ahead in Wisconsin.

Around six hours later when the sun was up, Michigan which had been  were left out. In that release, enough votes put Biden ahead in that state.

At this stage any candidate Trump or Biden who won two out of three of the big battleground states, Wisconsin, Michigan or Pennsylvania had a real path to victory.

Wisconsin and Michigan leaning Biden? That would do it.  And without Pennsylvania, which its  state supreme court has decided can count ballots postmarked by election day until Friday.

Trump would go to court over that, for sure. But it would be moot.

But Trump could still pull it out. But only if he ALSO keeps a wall of red through the Sunbelt. He must win Florida, Georgia, North Carolina, and Arizona. All four. If he loses one, he has no way to get to 270.

That’s the electoral map, for you. And to top it off, by 7 am pacific, as more ballots were being counted, Biden actually went ahead in the popular vote. Like Hillary Clinton did in 2016. But this time, Biden had more of the blue wall intact; two of three of Wisconsin, Michigan and Pennsylvania. And maybe by Friday, all three.

So this is the tightest race I’ve ever seen. I was hoping for a landslide repudiation of Trump. That didn’t happen.

But we shall repudiate his Marcos impersonation at 2 a.m. Eastern time early Wednesday morning.

Mr. President, we count all the votes in a democracy.

Emil Guillermo is a journalist and commentator. He has written his  column “Emil Amok,” since 1995.  Twitter @emilamok  See his podcasts on www.amok.com