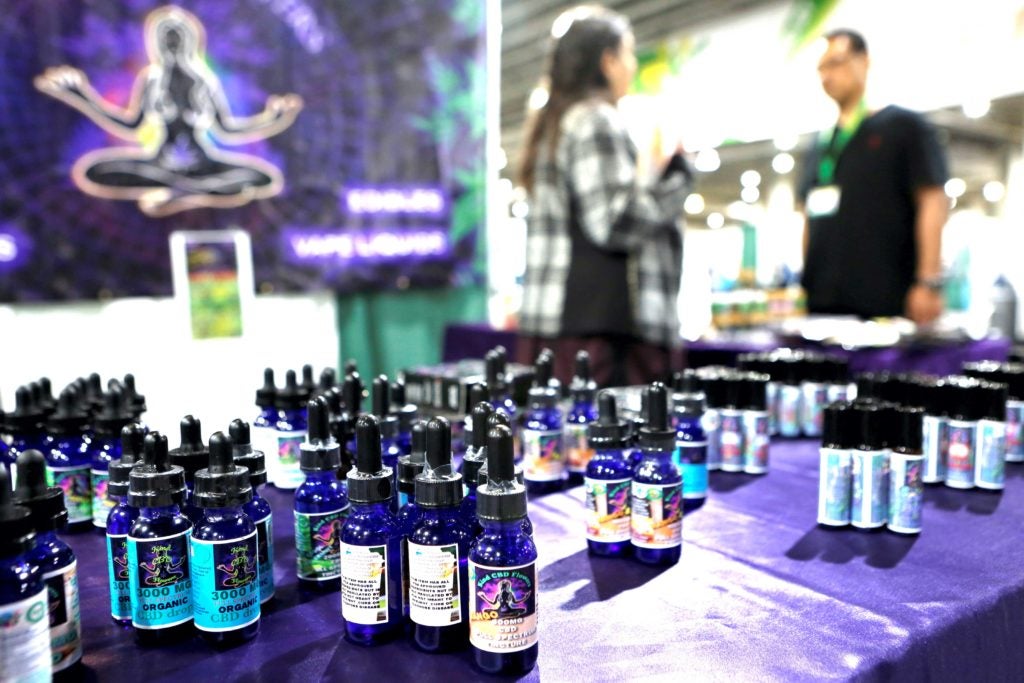 Products made from cannabis are seen displayed at a cannabis and hemp expo in Miami, Florida, U.S, November 13, 2019. REUTERS/Eva Marie Uzcategui/File Photo

NEW YORK – A year ago, Flora Growth Chief Executive Damian Lopez had just spent a chunk of his company’s seed capital buying a Colombian cannabis producer, and was fighting his way through the legal and financial hurdles that have made development of the industry such a challenge over the past decade.

These days, a boom in sales of his hemp-derived health food and beauty products during the coronavirus pandemic, and the prospect of an easing of marijuana laws in the aftermath of the U.S. presidential election, have him sealing a $30 million funding round and making plans for a U.S. public floatation early next year.

“I think the election will be a huge catalyst,” Lopez said on Wednesday. He was busy planning for the initial public offering (IPO) with investment banking firm Boustead Securities set to be the company’s chief adviser.

Lopez is far from alone. U.S.-based dispensary business Gage Cannabis announced two weeks ago it would seek to list in the new year, while synthetic cannabinoid maker BioMedican has also laid out plans to go public in the first half of 2021.

Another hemp-based health products maker, Vertical Wellness, told Reuters this week it too was looking to debut next year.

Today’s outlook is a far cry from 2018, when many Canadian-based players created for last year’s legalization there, as well as expectations of the widespread opening of U.S. markets, faced fines and shutdowns, or were forced to merge, due to regulatory roadblocks that hampered growth prospects.

Lopez and other CEOs say the potential January arrival in the White House of Democratic presidential candidate Joe Biden and his pro-decriminalization running-mate, Senator Kamala Harris, may prove a watershed moment for the industry.

But even if President Donald Trump wins a second term, changing views on marijuana laws among voters and lawmakers have brightened the outlook for the industry, CEOs and analysts said.

“Regardless of who wins, more and more states are showing their support for cannabis,” Lopez said.

Voters in five states, including densely-populated New Jersey and rapidly-growing Arizona, are expected to back measures on Nov. 3 that would allow recreational use of marijuana.

“We believe the November elections could drive meaningful upside for the U.S. marijuana industry,” said Michael Lavery, an analyst at Piper Sandler & Co.

Shares of companies with broad footprints in the U.S. market, including Curaleaf Holdings Inc <CURA.CD>, Cresco Labs Ltd <CL.CD> and Green Thumb Industries Inc <GTII.CD> are all up more than 20% since the presidential debate on Sept. 29, mirroring rising expectations of a Biden victory.

The Democratic nominee has widened his lead in several states likely to decide the election, Reuters polls showed, as well as his lead in online betting markets.

In last week’s debate with Vice President Mike Pence, Harris said marijuana would be decriminalized at a federal level in the United States under a Biden administration.

“Each election cycle cannabis comes closer to federal acceptance, and this election is pivotal to those goals,” said Cynthia Salarizadeh, founder and president of House of Saka, a cannabis-infused beverages business.

A Democratic victory for control of the Senate, which is looking increasingly likely according to polls, would replace Republican Majority Leader Mitch McConnell, who has blocked legislation that would allow cannabis companies greater access to financial markets.

Cannabis sales have surged with people stuck at home during the coronavirus pandemic. In California, sales data for August showed a 26% jump over the past year, while sales in Nevada were up 34%, according to BDS Analytics.

Federal decriminalization, or legalization in more states, would not be without specific challenges, investors said.

Many point to Canada as an example.

Though the country became the first G-20 nation to legalize recreational use of cannabis in 2018, regulatory hiccups in Canadian dispensary rollouts, slow international legalization and a lack of profitability sent investors packing over the next year. That left most companies at a fraction of their market values by the beginning of this year.

Michael Underhill, chief investment officer at Capital Innovations, cautioned that several bills would need to pass before U.S. companies will be on the same regulatory playing field as their Canadian counterparts.

Still, “it’s a dramatic change in expectations from three months ago, when it appeared Donald Trump would most likely win re-election,” he said.