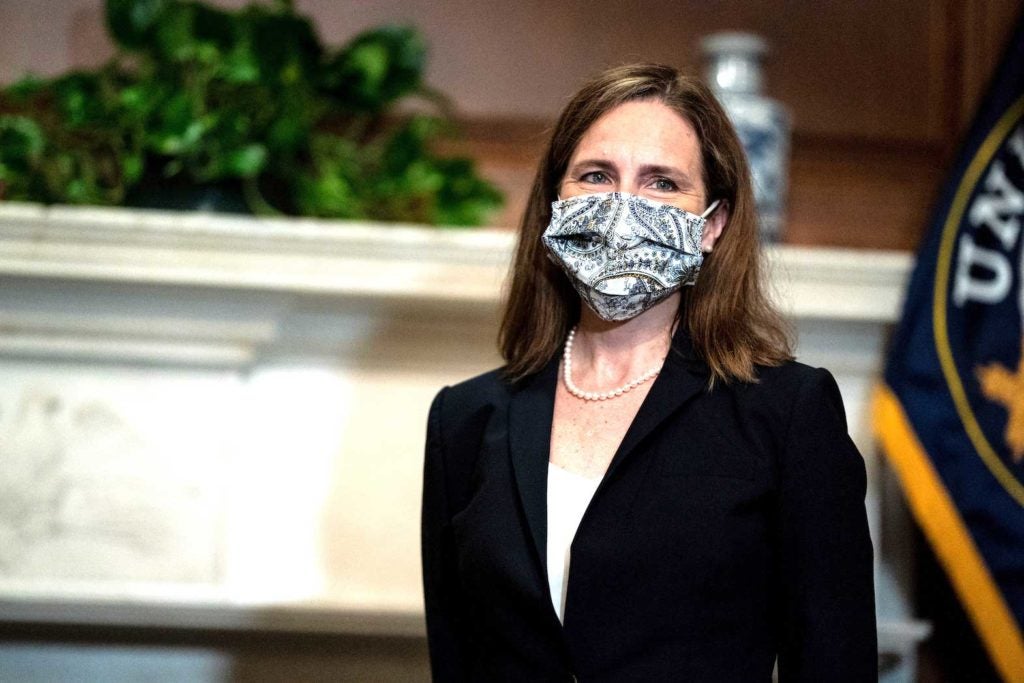 Judge Amy Coney Barrett, President Donald Trump’s nominee for the Supreme Court of the United States, poses for a photo before a meeting with Sen. Jim Inhofe, (R-Okla) on Capitol Hill in Washington, DC, U.S. October 21, 2020. Anna Moneymaker/Pool via REUTERS

WASHINGTON – Democrats said on Wednesday they will boycott a U.S. Senate Judiciary Committee vote scheduled for Thursday on President Donald Trump’s nomination of Amy Coney Barrett to the Supreme Court, calling the confirmation process “a sham.”

The committee has 12 Republicans and 10 Democrats. Its Republican chairman, Lindsey Graham, has signaled that even with Democrats boycotting he will be able to move the nomination forward, according to a panel spokeswoman. The panel’s expected approval of Barrett would pave the way for a confirmation vote on the Senate floor planned by Republicans for Monday.

Democrats have fiercely opposed Barrett, a federal appeals court judge whose confirmation by the Republican-led Senate would expand the top U.S. judicial body’s conservative majority to 6-3.

“This has been a sham process from the beginning,” top Senate Democrat Chuck Schumer and the committee’s Democratic members said in a joint statement. “Amidst a global pandemic and ongoing election, Republicans are rushing to confirm a Supreme Court Justice to take away health care from millions and execute the extreme and deeply unpopular agenda that they’ve been unable to get through Congress.”

Senate Majority Leader Mitch McConnell, who has made confirmation of Trump’s conservative judicial appointees a high priority, has been working to get Barrett confirmed to the lifetime post before Election Day on Nov. 3, as the Republican president has requested. Republicans hold a 53-47 Senate majority.

Trump nominated Barrett to replace liberal Justice Ruth Bader Ginsburg, who died in September. No nominee to the Supreme Court has ever been confirmed by the Senate this close to a presidential election.

Democrats reiterated their anger that Senate Republicans moved forward with the nomination so near an election after refusing in 2016 to allow the chamber to act on a Supreme Court nomination by Trump’s Democratic predecessor Barack Obama because it was an election year.

“Now, Republicans have moved at breakneck speed to jam through this nominee, ignoring her troubling record and unprecedented evasions, and breaking longstanding committee rules to set tomorrow’s vote,” the Democrats said in their statement.

Trump has said he believes the Supreme Court will decide the election’s outcome as he faces Democratic challenger Joe Biden, and has made clear that he wants Barrett on the bench for any election-related cases.

“Fearing a loss at the ballot box, Republicans are showing that they do not care about the rules or what the American people want, but are concerned only with raw political power,” the Democrats said in their statement.

Assuming the Judiciary Committee sends the nomination to the full Senate with a favorable recommendation as expected, McConnell aims to hold a Senate procedural vote on Barrett’s nomination on Sunday, which would limit debate so that a final vote to confirm her could occur sometime on Monday.