President Trump has put a halt on extra Covid emergency stimulus money to pay the rent, the mortgage, and your other life-sustaining bills.

But he is forcing Congress to act now to put Amy Coney Barrett on the Supreme Court.

Because while he is president and can get all the emergency drugs and doctor’s notes to keep his life going, he’s ready to pull the rug out from all of us who rely on Obamacare.

If you’re a Filipino American you should be paying attention to this major political play.

If Barrett gets in, many of you are likely going down.

This Supreme Court pick is all about your health care. Do you have it through the Affordable Care Act, a/k/a Obamacare? There have been dozens of attempts to strike down the law which has given tens of millions of Americans there health insurance. One of the attempts to end the ACA was thwarted when Chief Justice Roberts was the deciding vote on a 5-4 decision.

“Judge Barrett you’ve been critical of Chief Justice Roberts for his 5-4 opinion upholding the law,” said Sen. Dianne Feinstein of California in her opening statement today to Barrett, at a somber Judiciary Committee. She continued: “(You stated), that Roberts, quote, pushed the Affordable Care Act beyond its plausible meaning to save the statute, end quote. This well could mean that if Judge Barrett is confirmed, Americans stand to lose the benefits that the ACA provides.”

Barrett sat opposite the judiciary panel with a face mask on.

Barrett would be the bandit on the court that robs health insurance from the more than 130 million Americans with pre-existing conditions like asthma and cancer.

If the ACA goes away it  means 12 million others on Medicaid and  more than 2 million under the age of 26. And it could mean higher prices for women, just because of their gender, Feinstein said.

The hearings continue through the week. But a vote is expected before Halloween. Scary? You bet. That’s a 6-3 conservative court for perhaps 30-40 years.

And with Barrett on the court, the pain will come swiftly. The next hearing to end the ACA, is set for a week after the election  Nov.3.

If defeated, Trump may not get to choose such an important judge.

Wouldn’t it be wise to wait on Barrett’s appointment?  Sure would, unless you really  want to lose your health care in the middle of a pandemic.

We may not have any others, which may be okay, because we’ve seen what we need.

For me, the big takeaway is that it reminded  me of a song from 1963. You know it when you hear it. And when you see it: “Just one look, that’s all it took.”

If veep debates were so important, we’d still be quoting lines from that memorable Pence/Kaine debate four years ago.

But this Veep debate was different. It showed  us. And it matters. 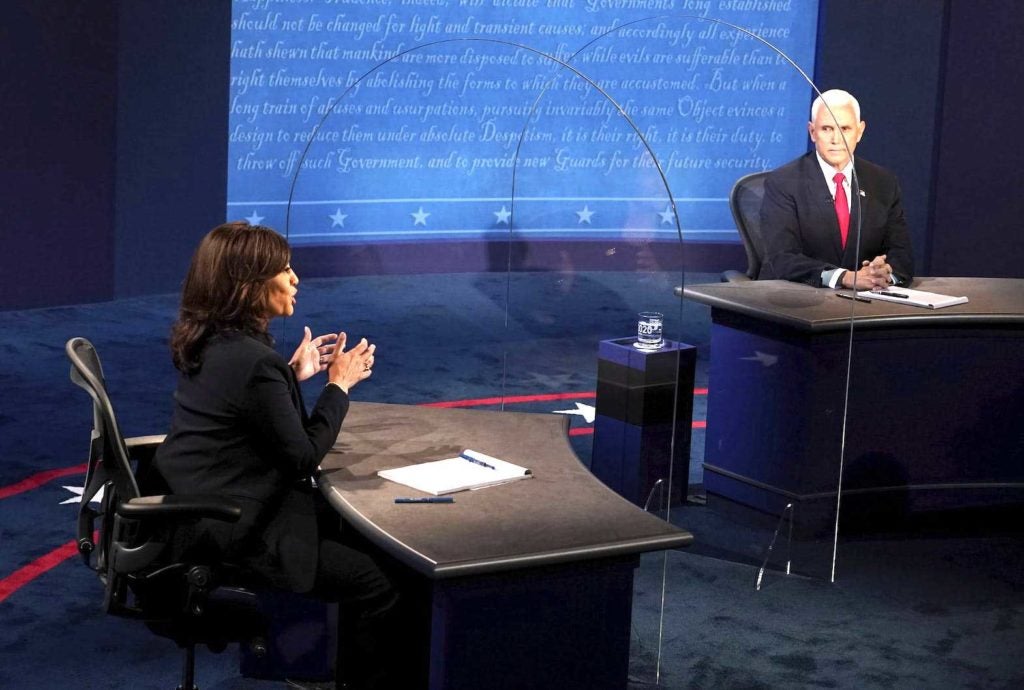 This is a campaign season where a Covid-sick, 74-year-old, obese white male gets helicoptered to the White House, struggles up the stairs, then proudly doffs his protective face mask as he tries to catch his breath to show strength.

Once again, optics are everything—when they’re false like the president’s. They’re even more important when the optics are true, as in the Vice Presidential debate.

That’s why all you need to know about tonight’s debate is the one wide image of the stage.

Vice President Mike Pence, the former radio talk host turned politician, looking  more like the white- haired local bank teller, protected by a plexiglass screen. Or is it buffet macaroni and mayonnaise protected by a sneeze-plate.

And sitting across him, Sen. Kamala Harris of California, the Indian and Black woman, daughter of immigrants, behind her own plexiglass. Glass ceiling? Let’s hope not.

The two debaters protected  each other from the virus, as Pence has been part of that likely super-spreader event that introduced the Supreme Court nominee. (Should she be remembered as “Amy Covid Barrett”?)

Just looking at the stage gives you the major subtext from the night.  It’s not what’s said.

All that mattered  is how America reacts to that image: Pence, the ultra-white conservative, and across from him Harris, the ultra-person of color, the first Asian American of Indian descent, the first Black woman.

We have never seen this before in a major political debate in America.

And it is the image that looks into the future in a way that the current presidential debates can’t. Trump and Biden, two white men in their ’70s, aren’t the future America.

No, the future of America, our culture, our society, our politics, is that debate stage of Harris and Pence. Since 1989, demographers have been talking about the U.S. becoming majority minority in the year 2050. That’s been revised over time to 2030. We are less than ten years away.

How does the country, gripped by racial reckoning stemming from BLM and police violence, feel about that? That’s the reaction we need to pay attention to.

Is it embraced wholeheartedly as the evolution of our great country?

Or will some look at the stage and, out of fear, wonder if Trumpism is just a little more palatable to ward off the demographically inevitable? Does it inspire a new group of Sen. Tom Cottons to emerge and counter the rise of America’s coalition of color?

In 2016, the GOP had a plan ready for a full embrace of diversity. It was dealing with the demographic reality and ready to welcome the continuing surge of Hispanic voters. Senator Marco Rubio of Florida was poised to be the political era’s “Golden Boy.”

But from out of nowhere came Trump. Despite the Bush legacy and more than a dozen experienced politicos, Trump got the backing of voters who felt that demographic fear. He promised walls, if not plexiglass. They gave Trump their votes. Few political pollsters saw it coming.

It hasn’t exactly worked out so well. The swamp was drained and replaced with Trump swill. Like the virus was his “blessing from God”?

And now, here we are with the future getting second billing in the Veep debate.

I wish what would be said tonight would be important. There were no major gaffes really. Pence kept speaking overtime and tried to bully Harris. She didn’t answer a question about stacking the court, but she held her own.

She proved her qualifications to be president.

Harris and Pence were decent debaters. We saw many more clash of ideas than in the presidential debate.  Of course, Pence had  an audience of one (Trump) to please, and had to defend him accordingly. That’s not a winning position.

Harris was e Harris. For those of us who have followed her, we know she is more fluid than not. It’s a sign of a good politician perhaps, one willing to look for solutions, rather than being intransigent. That may be how some California backers look at her mixed record as both the San Francisco DA or the state’s attorney general.  Harris said what was needed to win the night. Fracking, anyone? Sure.

So I didn’t expect anything in their words to make a difference in a profile of voters that shows almost everyone has made up their minds. People are already voting.

That leaves only the visceral reactions. How will America respond to the look of the stage–an event moderated by a white woman, overseeing a white-haired, white male debating a woman descendant of Blacks and South Asians?

It’s our national politics beginning to look like America.

Now as for other matters. Yes, , it was yet another poorly moderated debate.

I’ve moderated debates at the state and local level (gubernatorial, senate, congressional, mayoral). I kept time, asked questions, and controlled the flow. But one thing you do a lot if you’re in control is you rein in the candidates. You say, “Time. Mr. X, time. That’s all the time. Please sir, that’s all the time. PLEASE SIR SHUT UP!!”

OK, I didn’t say the last part, but you talk the rude candidate down until they listen to you. That’s how you know you have a decent moderator. Susan Page was too timid and deferential. I was disappointed she allowed Pence to more subtly interrupt the debate by using time for other questions to backtrack.

But what did we expect? Trump and Pence don’t play by the rules.

I do know one fly who played by his own rules. And he sure detected something he liked in Pence’s white helmet hair.

To the fly it was a hit. Just like that song. Just one look.

Emil Guillermo is a journalist and commentator. He writes a column for the Inquirer.net’s North American Bureau. Twitter @emilamok Listen to his podcasts on www.amok.com