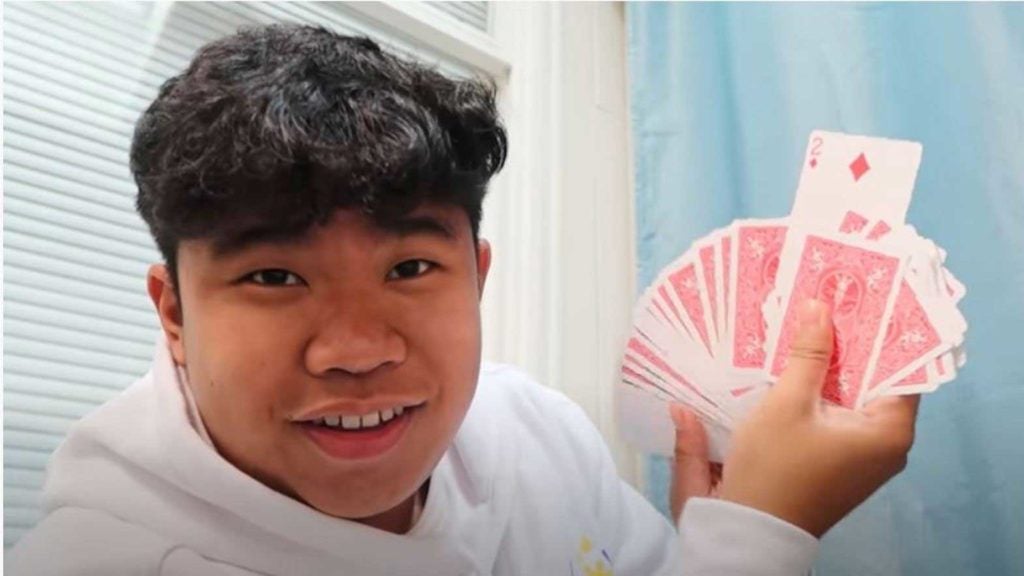 A screen capture of Sean Sotaridona from his YouTube Channel Sean Does Magic https://www.youtube.com/watch?v=BzlpzUMhnWE

Things have changed in magic since David Copperfield and David Blaine revolutionized it to the level of performing art, even science. Magicians no longer need wear a black hat and cape or pull a rabbit of a hat, or be part of a circus that visits sleepy towns.

Filipino American Sean Sotaridona didn’t have to run away with the circus to make a name for himself as a magician, taking after Blaine and Copperfield.

Sean Sotaridona, based in California, is an 18-year-old Tiktok sensation with over 15 million followers. He has a YouTube Channel Sean Does Magic with more than 200,000 subscribers and some 20. His instructional magic trick videos have drawn more than 20 million viewers.

When did his flair for magic start?

Sean was born in 2002 in Enschede, Netherlands. He is the second child among three siblings. His father, Leo, was a doctoral student who, after obtaining his PhD, was offered a research scientist position by CTB/McGraw-Hill, a U.S.-based company. The family moved to the United States in the summer of 2003.

“My wife and I came from a family that placed very high regard for Catholic values, education, and hard works,” Leo says. But he and his wife went for a “hybrid approach” in raising Sean.

“A hybrid parenting approach, a sort of compromise approach if you will, is culturally sensitive to the new environment. This approach brings out the best of both environments and works well in later years,” Leo explains.

Leo says it is common for kids to develop multiple interests during their early years. It is important to provide space for a child to freely explore and develop talents. But it is up to the parents to identify a dominant interest to focus on and look for opportunities to nurture it.

At the age of 6, Sean showed interest in magic. He auditioned for “America’s Got Talent” but did not make it. It did not discourage him. His parents nurtured his talent.

Leo’s work also brought them to different states across America. “I was always at a new school,” Sean recalls. “This was beneficial because I was able to practice my magic tricks with a new audience almost every year, which made me a really good performer.”

‘A kind of magic’

“I grew up watching David Copperfield and David Blaine do their stage and street magic specials on TV and was constantly amazed by their ability to perform,” Sean says.

He has also been buying books and DVDs about magic. YouTube though, has taught him a lot about magic and performance.

Of course, Sean’s first audience was his friends.

“I would get home from school, and the first thing I would do was look up a new magic trick for me to learn. I would take these new tricks and bring them to school the next day for my friends to see,” Sean proudly shares.

Sean does not use his tricks to get away with anything mischievous. Instead, he performs magic on the streets, restaurants or stores.

“It often leads to free goodies. But sometimes I also use magic as pranks, many of them can be seen on my TikTok page,” Sean says. Sean’s tricks can be viewed here: https://www.tiktok.com/@seandoesmagic.

“I always believe that the only people who hurt others are ones that are hurting within themselves. I feel empathy with anybody who spreads hate, and I deal with them by spreading love back. Kill them with kindness,” Sean says.

Sean’s love of magic hasn’t stood in the way of a regular education. “I grew up putting my education first and then hobbies second. He recently graduated from high school and is currently choosing digital creation and entrepreneurship as his career path.

“It feels crazy to grow this (social media) following in such a short amount of time, and every single day there is so much gratitude in my heart. I never thought that my videos would get me this far,” Sean says. If he were not a magician, what would he be?

“I would probably be a coffee barista! I love coffee and I’m also very extroverted and love talking to people!” Sean laughs.

In the future, Sean sees himself as one of the best magicians and digital talents in the world. He also wants to start his own talk show and podcast as well as to start a foundation to help people in need especially those in the Philippines.

His message to young people who want to be magicians: “Never, ever give up. You only ever fail when you give up. If you truly have a passion or dream, pursue it and don’t let anybody tell you that you can’t do it. You can.”

With hard work, perseverance, and dedication to his craft, Sean has not needed magic to fulfill his plans.

Sean and Leo also launched a Go Fund Me campaign to provide assistance to the needy families in the Philippines affected by the Covid-19 pandemic.  See link: https://www.gofundme.com/f/feedthephilippines