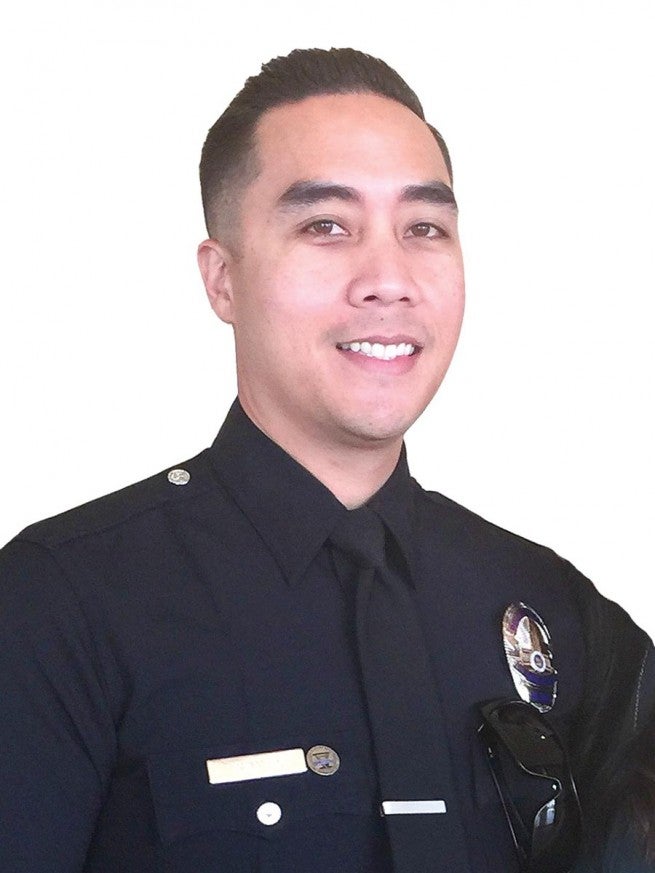 LOS ANGELES — It’s been almost five months since Matthew Medina first learned about his rare blood disease and how his Filipino heritage is affecting his chances of being cured.

Earlier this year, the 40-year-old police officer was going about his normal duties as part of the Los Angeles Police Department’s (LAPD) Harbor Division gang unit.  By his side was his close friend, Dante Pagulayan, also an officer with the department.

The two have known each other since they were about 14 years old in high school and ended up going to Cal State Long Beach together, before eventually joining the LAPD.  It was at the college, Pagulayan shared, where Medina met his wife Angelee with whom the latter now has two beautiful daughters.

“Matt is one of the funniest guys I know,” Pagulayan said about his friend during a recent interview with the Asian Journal.  “If you want to have a good time, he’s going to be your guy.”

Currently, Medina remains in quarantine after having been diagnosed with aplastic anemia, a rare disease that claims 600-900 people in the United States each year, according to the Aplastic Anemia and MDS International Foundation (AA/MDS).  The fact that he’s Filipino presents a larger challenge.

According to AA/MDS, it can affect anyone regardless of race or gender but is diagnosed more often in children, young adults, and older adults.  It also appears more often in Asian Americans.

For Medina, the disease seemed to come out of nowhere.  “Matt was a very precautious guy,” said Pagulayan about Medina’s health habits.  “He always took care of himself, took vitamins, went to the doctor…  He was that kind of guy.”

Radiation and chemotherapy, toxic chemical exposure, use of certain drugs, and autoimmune disorders are some factors known to injure bone marrow, thus affecting blood cell reproduction.  But for the most part, there’s no telling what causes aplastic anemia.

Getting a bone marrow transplant is the only cure for aplastic anemia.  However, finding a match is a major obstacle that those diagnosed are forced to face.

In order for a transplant to be successful, both the donor and beneficiary need to share eight human leukocyte antigens (HLA), or cell markers.  This explains why more chances of success happen between a donor and receiver of the same ethnic background.

For Medina and many others, chances of recovery are greatly reduced simply due to the number of minority-group members registered to be potential bone marrow matches.

“Out of the 12 million people registered, only 0.5 percent were Filipino,” said Pagulayan.  “It was quite a surprise.”

As of 2016, the number of Asians recorded in Be The Match’s registry made up only six percent of the total registered, shared Ayumi Nagata, Recruitment Manager of Asians for Miracle Marrow Matches (A3M).

The lowest percentage came from those who identified as Native Hawaiian/Other Pacific Islander — their percentage hovered at 0.1 percent.  The largest group at 57 percent — with 7.8 million — comprise of those who are white.

While transplants between family members have worked, it’s rarely the case, according to Mixed Marrow, a foundation dedicated to increasing bone marrow and blood cell donors for patients of multi-ethnic descent.  Finding a match within the family is only successful 30 percent of the time, leaving 70 percent searching elsewhere.

Nagata has encountered a number of cultural and religious reasons that explain the low number of Asian registrants, but the lack of familiarity and awareness remain the biggest culprits.

Organizations like Mixed Marrow and A3M are working together to disprove these misconceptions by focusing on increasing awareness through outreach within cultural contexts.

One common misconception is that donating marrow is painful.  Nagata informed that most procedures are done through nonsurgical Peripheral Blood Stem Cell (PBSC) donations where cells are collected through the blood rather than the bone itself.

Umbilical cord blood is another source, and Be The Match lists a number of hospitals that collect the blood for a public cord blood bank.

There are now currently 1,270 ethnically diverse, and 101 Caucasian registrants through Medina’s campaign, reported Nagata.  With the help of Medina’s support group and community, there’s hope that the numbers can increase.

Since the start of Medina’s match campaign, two others in need of bone marrow transplants were able to find a match.

On June 25, Medina personally posted on his Match4Matt Facebook campaign page, “Even if they never find a match for me, I can say that this campaign has been a success since it has already helped save the lives of at least two people (so far).”

For Medina, the search continues but he remains optimistic.  On his Facebook post, he reported that his blood cell counts have increased and he hopes that the upward trend continues toward remission.  “I am not out of the woods yet,” he added.  “There is still a long road to recovery ahead, but the proverbial light at the end of the tunnel is definitely getting brighter.”

But as Pagulayan said, the only way to really revert it is through a bone marrow transplant.  Medina’s condition can change just as quick as how he found out he had the disease.

To those thinking about registering to be a match, Pagulayan said to think of a loved one and what would happen if you woke up and found out they had the disease.

To join a registry, anyone up to 60 years old can sign up, but donors between ages 18-44 are preferred. There are also medical conditions that may make someone ineligible.  The process itself takes less than five minutes, according to Nagata.  As Pagulayan put it, “It takes less time to swab your cheeks than it takes to fill out the paperwork.”

More information on registering can be found on Be the Match’s website.  To join Medina’s registry, visit www.join.bethematch.org/match4mat