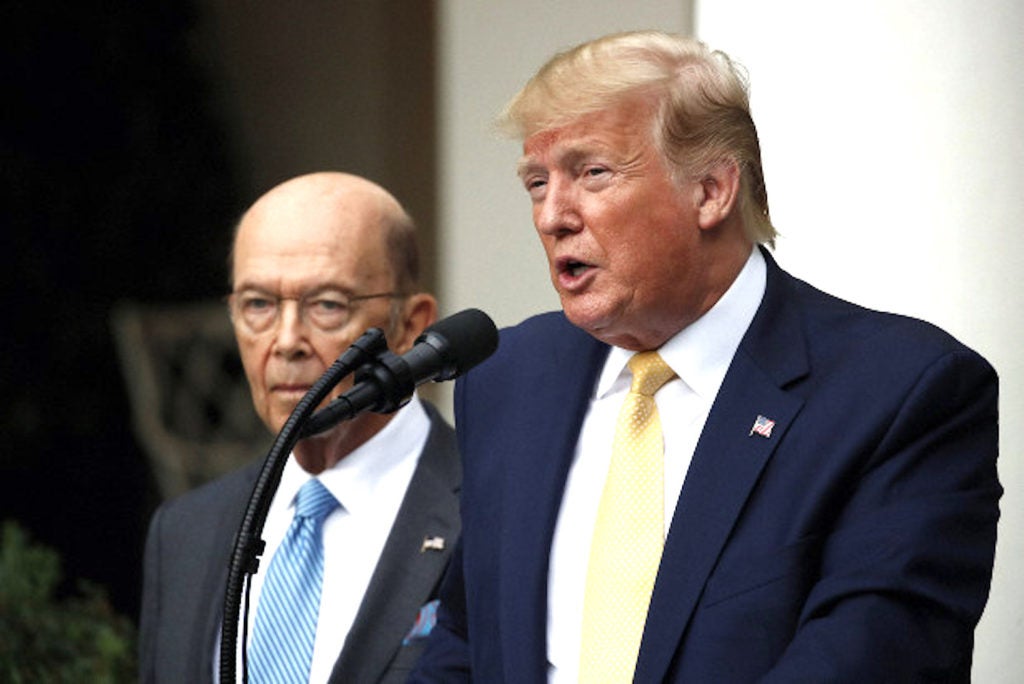 President Donald Trump is joined by Commerce Secretary Wilbur Ross as he speaks in the Rose Garden at the White House. Civil rights groups have gone to court to block their attempts to end the 2020 Census count early . (AP Photo/Alex Brandon)

GREENBELT, Maryland – Civil rights groups asked a federal court on Monday to prevent the Trump administration from ending the 2020 Census count more than a month early.

Seeking a temporary restraining order, membership organizations and Latino and Asian American voters say they would be harmed by the administration’s plans, which would diminish the minority count while increasing the white population count.

“Donald Trump and Lyin’ Wilbur Ross have shamelessly sought to manipulate the Census in every way imaginable,” said Thomas A. Saenz, MALDEF president and general counsel.

“Their latest, last-minute decision – to truncate the Census in the midst of an unprecedented pandemic – epitomizes this administration’s ongoing disrespect for political propriety and for data science; they must be stopped,” Saenz added.

The groups are asking a federal court in Maryland to block, on an urgent basis, the Trump administration’s recently announced plan to end the counting of households at the end of September and to accelerate the compilation of the Census count.

The groups argue that the truncation of the Census violates the Constitution’s Enumeration Clause, which requires an actual count of all persons living in the United States.

At issue is the Trump administration’s abrupt decision to truncate the Census amid a pandemic. In April, officials announced they would extend the timeline for field operations in response to COVID-19. But this month, the Commerce Department, which oversees the Census Bureau, abruptly abandoned the COVID-19 plan, and said it would rush to end census operations much earlier than previously scheduled.

“The decennial census needs to count everyone once and in the right place,” John C. Yang, President and Executive Director of Advancing Justice-AAJC. “Under the current schedule, the Census bureau will not be able to achieve this required goal.”

MALDEF, Advancing Justice | AAJC, and WilmerHale argue the administration’s new timeline is part of a larger effort to manipulate the Census and apportionment process in an effort to deny political representation to immigrants and communities of color.

The request comes in connection with a 2019 lawsuit that challenges the administration’s census plan, including an attempt to create a new citizenship dataset for states to use to exclude primarily Latinos, Asian Americans, and noncitizens from political representation after 2021.