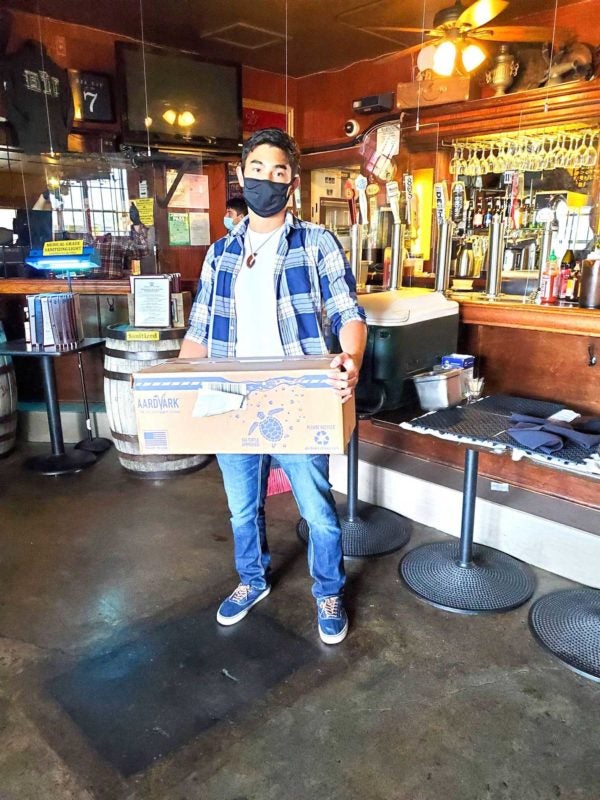 DALY CITY, California — This time last year, Willy Carandang’s crew was working nonstop, serving lunch, snacks and dinner for 300 at a corporate convention in San Jose, on top of cooking and staging graduation, debut and other celebration buffets up and down the region.  All the while, they were offering all-you-can-eat lunch and full-menu dinner at their brick-and-mortar restaurant Hapag Pilipino, 45 minutes away minus traffic in St. Francis Square here.

Perhaps the busiest Filipino caterer in the San Francisco Bay Area, Carandang and company suddenly downsized in March.  They suspended any form of table service and relieved seven part-time staffers to cope with the dramatic plunge in business with the surge of Covid19 cases.

The situation is nothing Carandang or his industry peers had imagined, given the consistent upward trajectory of their enterprises.

Similarly, 2020 began auspiciously at 7 Mile House, a historic restaurant in Brisbane.  The town of under 5,000 residents along the border of South San Francisco, crossing Daly City to the southern edge of San Francisco is where Vanessa Garcia redefined Filipino food and hospitality since taking ownership 15 years ago.

Instead of a typically sluggish January and February, the establishment that was a stagecoach stop in the 1900s saw record patronage promising blockbuster turnout at its annual Jazz Appreciation and Adobo Cookfest in the coming spring and summer.

But while revving up for a landmark year, Garcia abruptly hit full-stop March 17, a day after the state shelter-in-place mandate, placing herself and her team of 40 on furlough.

Both restaurateurs had already started adjusting to the San Mateo County Health Officer’s directive to entertain a maximum of 50 patrons at tables at least 6 feet apart to deter infection.  Garcia and staff had assiduously counted heads and “reluctantly removed” half of existing tables to comply.  Carandang said they had “no choice but to abide.”

Their industry is among the biggest casualties of the coronavirus.  In the first three months of the crisis, the National Restaurant Association reported losses of $120 billion.  By May, over 5.5 million of 20.5 million jobs lost were in the restaurant industry, Eater reported. 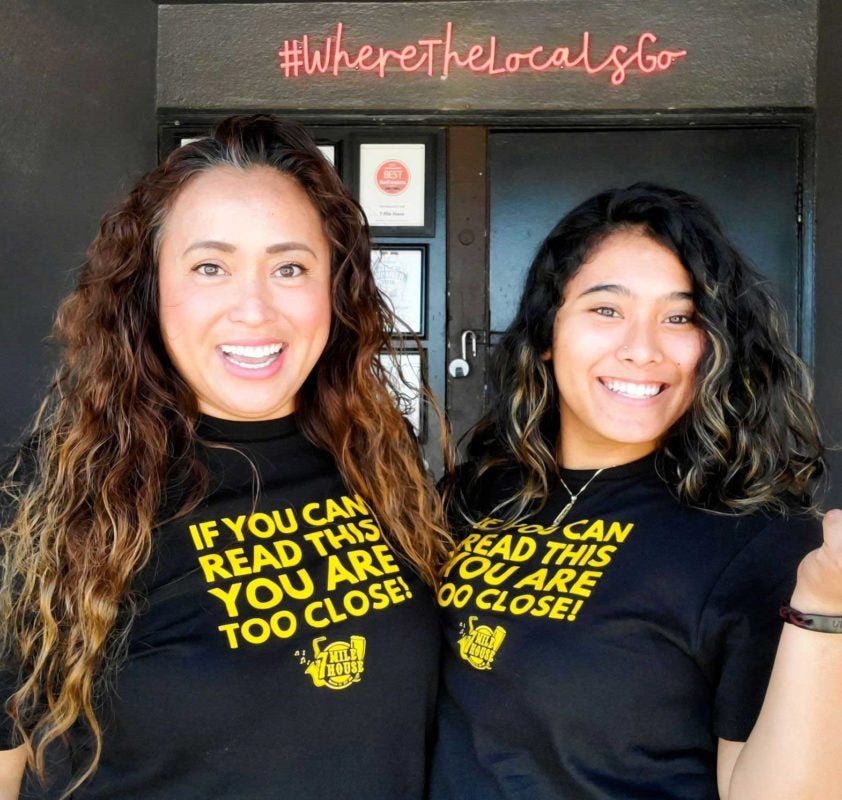 Restaurateur Vanessa Garcia and daughter-bartender Visadora Villacarlos happy to serve again after over a month in lockdown.  CONTRIBUTED

Garcia and Carandang were blindsided.  Though aware of reports of a newly discovered virus in China, Garcia had anticipated the “government to handle it like when the Ebola first started coming” to this country.  Neither envisioned the threat to escalate to worldwide calamity that would last as long as it has with California “number 1 in the number of cases here in the US and with USA being number 1 in the number of cases globally,” statistics perturbing Carandang.

Like most immigrant businesses, Hapag Pilipino and 7 Mile House are family-owned and managed.  An adverse twist of fate affects the entire brood, but the practice may also result in swift decision-making.  Survival and success are a shared responsibility. Fans of Hapag Filipino’s famous bellychon can have their fix only by contactless take-out. INQUIRER/CMQuerol Moreno

Garcia is the general manager, her mother Cleopatra Garcia is pastry chef, her daughter Visadora Villacarlos, a bartender, and her son Tylaw Villacarlos, an assistant.  CEO Carandang’s wife Norie is a chef and 4 of their 5 children are culinary school grads, each alternating roles and rotating shifts in the kitchen, front of the house and the office as needed.

“The most practical thing to do was to shut down not only for professional reasons but for personal reasons as well,” Garcia shared with INQUIRER.net her initial reaction to the unexpected turn. “My biggest concern was to protect my Mom from the virus. At 73 she is strong as an ox and works out every day, but I was not about to risk her safety.”

“Because my family is the core of HP, we are more flexible in coping with the present situation,” Carandang said. ” Because our operations were reduced to 25% of normal, we only retained the services of our full-time employees. Part-time employees filed unemployment from their full-time jobs.”

For over a month restaurants remained shut except for takeout and delivery.  When restrictions eased in May, operators proceeded with distanced indoor dining only to be halted anew as cases surged what in hindsight is generally viewed as premature return to semi-normal.

Hapag Pilipino’s sister operations – catering and roasting and supplying its famous lechon — afforded a smooth shift to contactless takeout and delivery through established online delivery services.  Pivoting was a bigger challenge for 7 Mile House, whose draw was the food plus atmosphere from its live music and hipster service. 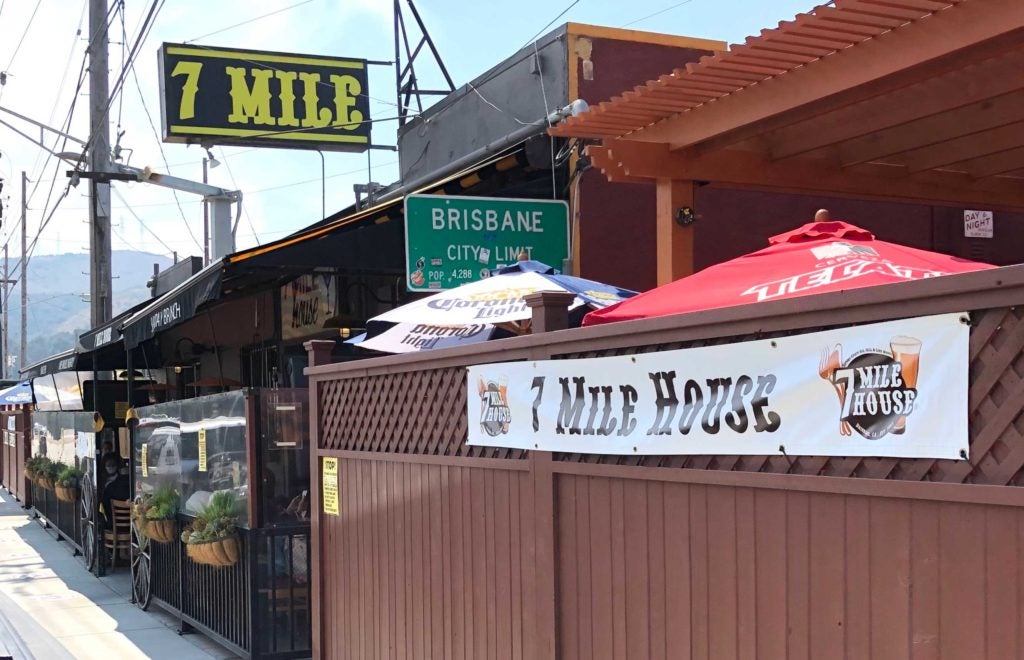 “Thankfully, we were able to bank on our good food,” Garcia spoke of how she concentrated on the menu minus the ambience.  “I could not imagine running a restaurant with mediocre bar fare. We at least have an amazingly unique, eclectic selection of what I call Bay Area diverse comfort food, a true reflection of community favorites,”. 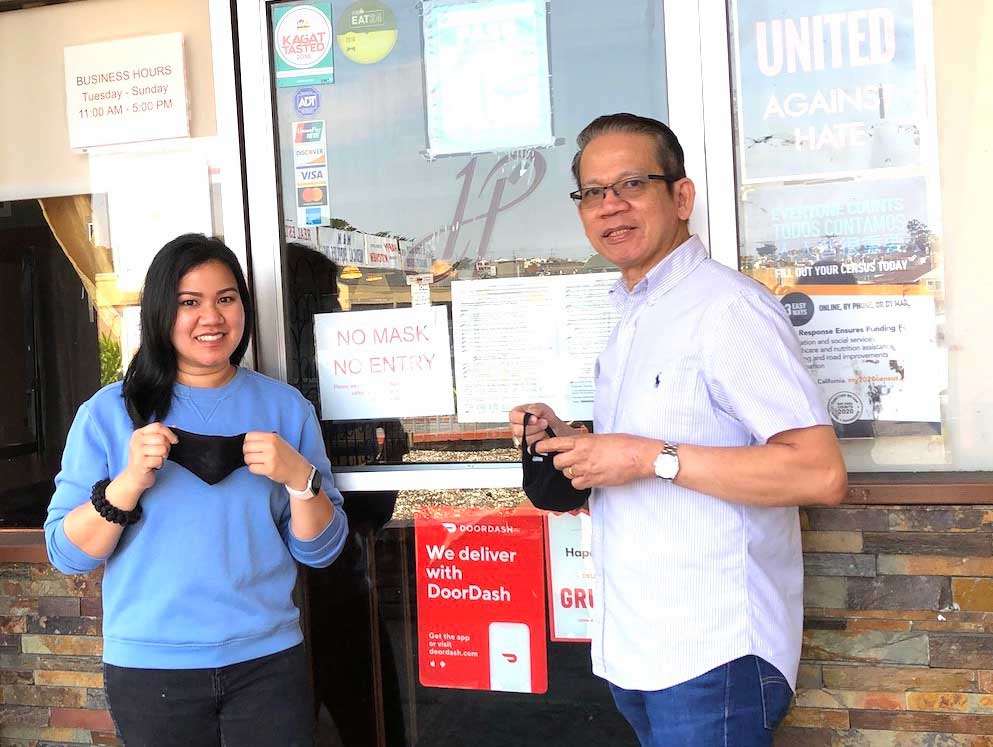 Still, she’s grateful to her city for timely concessions allowing her restaurant to stay open.

“Once I heard that the state was possibly going to permit restaurants to open with outdoor dining, I immediately contacted the City of Brisbane,” Garcia recalls. “They met with me on the same day I reached out and told me I could expand sidewalk dining on both sides of my building with the condition that I would have to build a 6-foot barrier to protect customers from passers-by. I contacted my handyman who built our 6-foot walls in 24-hours and that immensely helped my business.”

Away from the fog belt on 2800 Bayshore Boulevard in the foothills of San Bruno Mountain, 7 Mile House is an oasis on the grey roadway, where its radiant awning and table umbrellas, diverse clientele and the aromas from the grill beckon.  The option is unthinkable for Hapag Pilipino, a refuge from Daly City’s often-damp natural air-conditioning, to where  diners dressed in layers are relieved to escape the outdoors.

Carandang said he did not know of the city’s assistance to small businesses like his, other than encouraging residents to shop and dine locally.  What has been a lifesaver is the Paycheck Protection Program provided by the Small Business Administration through the Dept. of Treasury that he said has been “a big help for us to sustain the business for now because it helps us in paying rent, utilities and salaries.”

Garcia leaned on the same safety net for three months, and is exploring options for its termination.  She dreads the idea of another staff furlough, not with unemployment checks reduced by the Presidential Executive Order and Congress deadlocked on a resolution for stopgaps.

Other Fil-Am restaurants stayed shut after the second SIP.

“We’re 100% closed,” the reception at Lucky Chances in Colma replied when INQUIRER.net called to ask if they were open for take-out.

The much-awaited Avenida Modern Filipino Restaurant in the heart of San Mateo held a “soft opening” just when the virus hit US shores.  Its website now proclaims it as permanently closed.

“Kuya’s is doing the best it can, given the current crisis,” responded Salvacion “Babes” Edang, co-owner of the San Bruno establishment whose Filipino interpretation of Spanish food is available for take-out.

In July, Chez Panisse founder-owner  Alice Waters, recognized as the Mother of California Cuisine, sued her insurance carrier for not covering losses incurred due to the SIP order that shuttered her legendary restaurant in Berkeley.  Recently, high-profile chef-restaurateurs Tom Colicchio and Jose Andres formed the Independent Restaurant Alliance to “secure vital protections for the nation’s 500,000 independent restaurants and the more than 11 million restaurant workers impacted” by the crisis.  Their first initiative is lobbying Congress to pass a $120 billion bailout for small- and mid-sized restaurants.

Garcia said she was happy to know how her prominent colleagues are stepping up to rescue the industry for which she does not have the capacity at the moment.

“Suing my carrier would be a waste of energy and money for me and I have chosen to sit in the sidelines to see what happens to their claims. Right now, I am just focused on surviving the next few months and do not have the resources and energy to put into fighting them,” she said.

Carandang frankly shared that he has yet to review his insurance policy to know if it covers losses caused by the pandemic.  The unofficial “Catering King” even managed to participate in a Fil-Am organization’s chicken adobo meal distribution on Mother’s Day.

“Business is hard, but helping the community still cannot be discounted at this time. We are looking forward to helping our front-liners even in small ways we can,” he explained.

“I am worried for all people, especially the senior citizens and those people with pre-existing conditions. I encourage them to order to go or avail themselves of our contactless delivery if they are craving Filipino food.” He is resolved to stop in-dining at his restaurant “until it is 100% safe” and a vaccine has been developed.

Garcia is thankful for the outpouring of love from staff and guests since she resumed operations outdoors.  The pandemic has claimed people near and far dear to her, informing her restaurant declaration of  “hypervigilance” by posting house rules she says exceed CDC and county guidelines.

“We should never take our world and our health for granted and we all need to care for each other,” she counted her blessings, giving food for thought: “All these years I had worked on creating that deep emotional bond with my community- a personal connection that a good dish or a great cocktail cannot provide. It is the constant sincerity in caring for our neighborhood and each person that comes into our doors that sets us apart.”

Little wonder that at 3 p.m. on Saturday, masked guests stood in line on designated safe circles awaiting a table at their favorite haunt.  Which they could have only if their temperature hovered under 98.6.