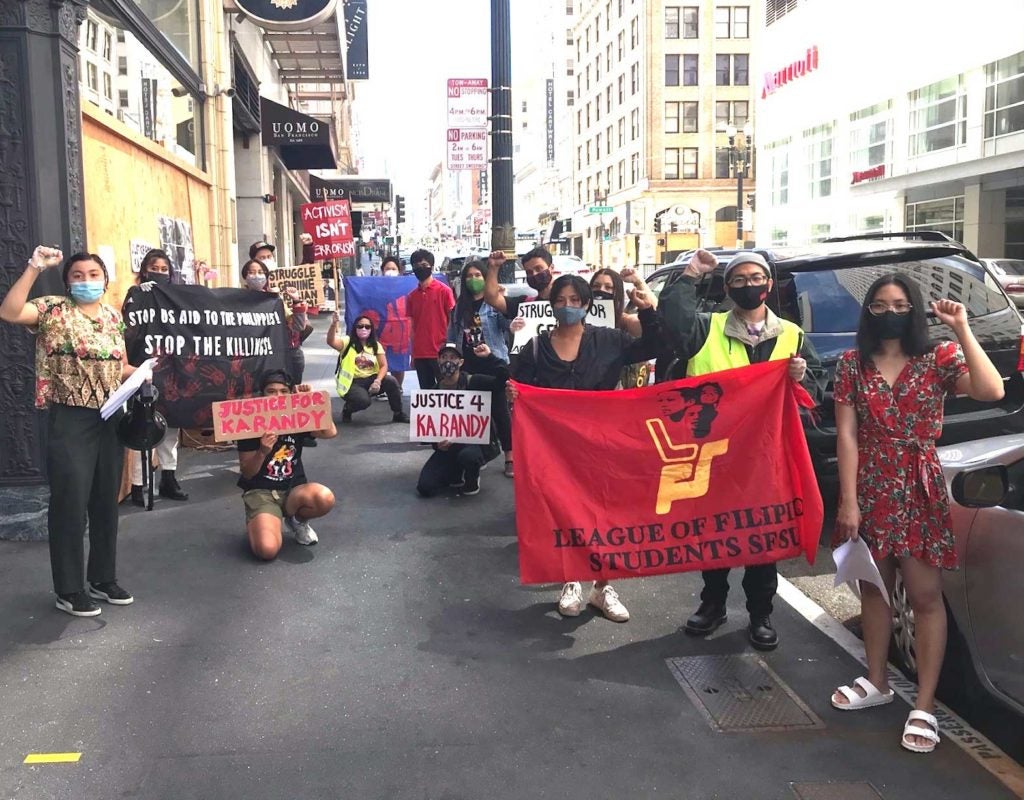 Vigil in front of the Philippine Consulate in San Francisco protesting the killing of activist leader Randall Echanis in the Philippines. KAMI YAMAMOTO

A vigil in front of the Philippine Consulate was part of a larger national day of emergency action on Thursday, Aug. 13, with other cities such as Houston, Dallas and New York participating.

“With the call to action we hope to bring attention, not just to the murder of Ka Randy but for all of the state sanctioned murders. We hope that this brings further investigation and that there will be justice for our fallen kasama (comrade).  We want to bring attention to all of the tragedies that have occurred before and after the signing of the Terror Law,” said Jennifer Bittick, member and international solidarity officer of Gabriela Oakland.

Echanis, the National Deputy Secretary-General of the Kilusang Magbubukid ng Pilipinas (Peasant Movement of the Philippines), was killed on August 10 during a suspected police raid in his home in Quezon City.

A longtime activist, Echanis served as the chairperson of the Anakpawis Partylist until his death. He was a former peace consultant for the National Democratic Front of the Philippines, and continually contributed to the promotion of pro-farmer legislation. Some of his notable achievements include the Comprehensive Agreement on Socio-Economic Reforms (CASER)  and the pro-farmer Genuine Agrarian Reform Bill (GARB).

Bittick echoed activists’ common demand for an investigation into the killing of Echanis. They claim that the crime scene and wounds he sustained suggest the opposite of what police officials are claiming. They also call for the inquiry to be conducted by an impartial agency separate from the Philippine National Police.

Quezon City police officials originally identified Echanis’ body as belonging to one Manuel Santiago and denied that it was Echanis. QCPD removed Echanis’ remains from the funeral parlor where his family left the body, and they also arrested a paralegal Pao Colabres, who was guarding the remains, on the charge of obstruction of justice. Police claimed that the family needed a release order for the body.

Police officials sought a DNA test in order to positively identify the body despite the victim’s wife and lawyer’s confirmation that it was in fact Echanis. Police officials finally acknowledged the body as Echanis’ after three days.

Bittick blamed the Duterte administration for Echanis’ death, saying it is part of the government’s mission to silence dissent. “This is a tool to scare the people under these increasing fascist conditions and de facto Martial Law. Echanis’ death is yet another example of the militaristic violence that has been allowed to take place since the signing of the Anti-Terror Bill in July.” said Bittick.

Highlighting the concerns of the Filipino American community, Bittick stated that “As Fil-Ams, many of us may feel disconnected about what’s going on in the Philippines. But as many of us, like myself, have family there, and I think news like this does make us worry about the safety of our loved ones. For me, this was another stark reminder of the violence that my loved ones are facing. I think there are many other people feeling this way too.”

The Philippine Consulate declined to comment, a representative stating that they are unauthorized to speak on the matter.