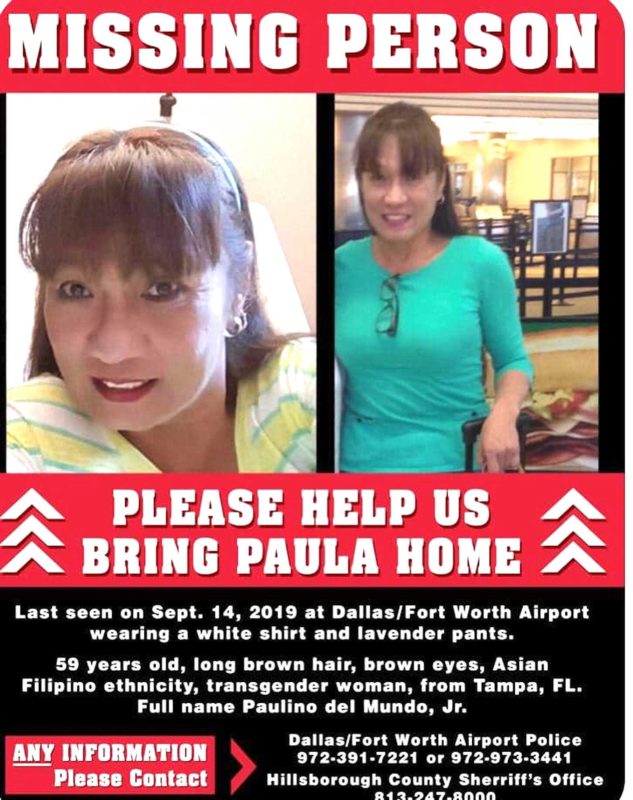 On September 15, 2019, Paula del Mundo, a transgender nursing assistant, went missing at the Dallas Fort Worth International Airport in Texas. She was last seen walking aimlessly by the airport’s exit area, wearing a white shirt and lavender pants. It’s been almost a year since her disappearance, and her family to this day has no idea where she is or what might have happened to her.

The Del Mundo family, scattered across Manila, New York, California, and Florida, has hired a private investigator to do its own search after airport detectives failed to turn up information on Paula’s whereabouts. The PI simply ran with their money and did not do his job. Volunteer groups and a Fil-Am human rights organization assisted the family.

Fifty-nine-year-old Paula – birth name is Paulino Norberto del Mundo Jr. — was supposed to visit Mexico on Sept. 15. She usually treats herself to ]trips abroad, being a consistent Model Employee in her department at the James A. Haley Veterans’ Hospital where she is a Nursing Assistant. She traveled to the Dominican Republic in the last two years. This year, she decided she wanted to see Cozumel, a resort city in Mexico.

“As an organized and meticulous person, she had everything covered for this trip including her air fare, hotel, food, sightseeing trips,” said her sister Yolanda when interviewed by email by The Fil-Am. “In every trip she had, she was always excited completing her wardrobes from head to foot.”

On Sept. 14, she left her Tampa apartment in early morning to go to DFW for her connecting flight to Cozumel at 3 p.m. In the evening, Lolita, the youngest sister from Florida, received Paula’s last text messages, saying she decided to abandon her travel plans and asked her to purchase a return ticket to Tampa. She could no longer be reached when Lolita tried to get back to her for flight details. Earlier, another sister, Leonor from California, received a morning call from Paula that she could not find the terminal, a premonition that she had not fully decided on leaving. By 7 p.m. all five sisters across the U.S. started to get worried and contacted DFW, requesting to page Paula so they could talk to her about coming home. 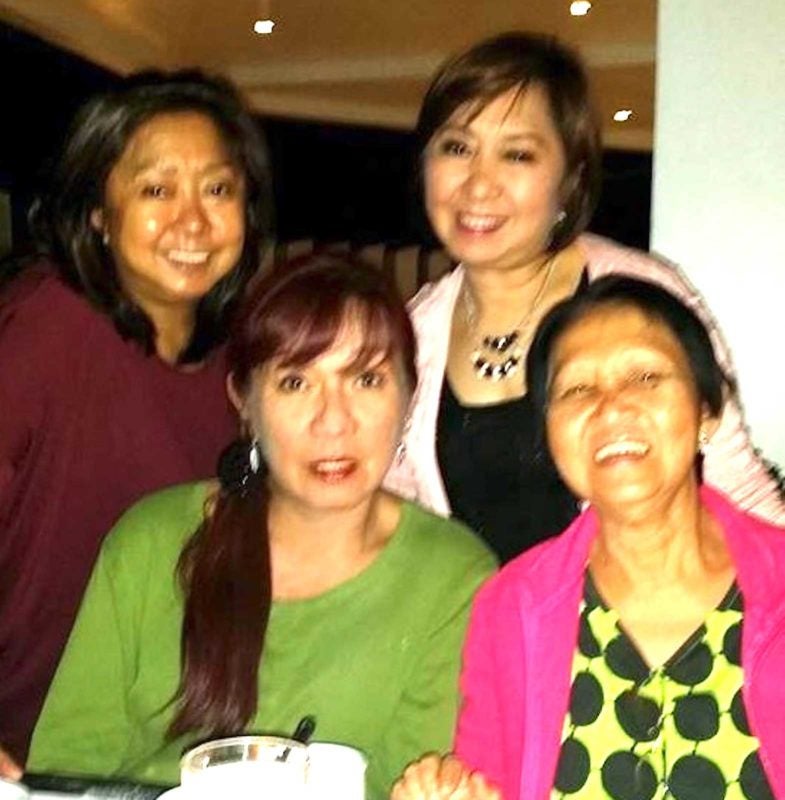 “We never heard from her,” said Yolanda from New York.

It would be the beginning of a long, tortuous nightmare for the Del Mundo family. The parents are both deceased, and the siblings are accomplished professionals, some of them holding important positions in the Philippine government.

Yolanda and her sisters announced the tragic news on Facebook. From that moment on, their walls have become a streaming repository of police updates, photos, people to contact, news reports, messages of encouragement and support and all sorts of questions which they painstakingly answered. Lolita had to secure a police report from Tampa Hillsborough County, Paula being a resident of the area, while Leonor enlisted Paula in the National Missing and Unidentified Persons Systems.

On September 20, sisters Lolita and Yolanda decided to go to DFW to do their own search and contacted the airport authorities. The DFW Airport Public Safety was the first to investigate and confirmed the last clothing worn by Paula from the footage. The five-day stay allowed the sisters to respond to media interviews and to connect with the local LGBTQ community.

An all-volunteer group called the Community United Effort (CUE) Center for Missing Persons offered to help, said Yolanda. They conducted a two-day search of the area where Paula was last seen. CUE’s nine-person search team brought with them K9 dogs, motorized boats, aerial video cameras, and other search tools and found no clue nor trace of Paula. They said they would be back to do a follow-up search.

It was through the meticulous effort of Caiti Le Ward, a human rights organizer from Malaya Movement in Texas, that many important information became known, said Yolanda.

“For the past several months, she worked closely with us, sisters of Paula without a fee doing her own private research, contacted multiple search teams and through her effort, CUE was there to offer help. She also interviewed the two airport detectives, Sgt. Ross and Det. Milford of DFW, and conducted a physical search of the last known intersection and surrounding areas Paula was last seen on CCTV footage,” said Yolanda. “She is our guardian angel.”

She continued: “Caiti did an extensive job in the search, wrote detailed information, times, dates, took pictures, canvassed the area, and kept a transcript of conversations throughout the case.”

The family was able to determine that Paula exited Terminal C at 7 p.m. and walked outside reaching the Exit Area near where the Office of Airport Public Safety is located.  The time was 4 a.m. of September 15. The trail went cold after that. 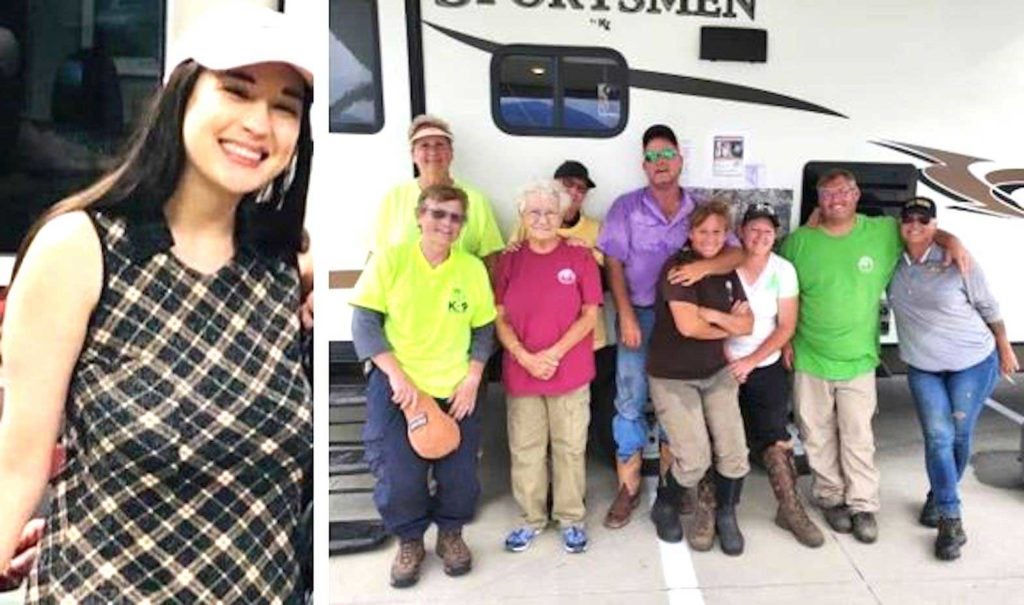 “From the airport footage, Paula was seen walking towards the exit area of the huge DFW airport, aimlessly and tirelessly perhaps feeling the pain, confusion, fear and uncertainty of where she was going to,” said Yolanda. “It’s been almost nine hours of walking, then she was seated at the curb for two hours, and she was gone. Wherever could she have gone?”

She added that Paula had undergone rotator cuff surgery before the trip and so the medication she was taking may have contributed to her sense of disorientation.

There are many theories as to what may have happened to Paula, according to Yolanda. Hate crime against trans people of color; a vehicular accident; an abduction; or possibly gun-related violence. She said the hate crime was suggested by the Texas news media after three transgender individuals had been attacked before Paula went missing.

“The loss of Paula is a mystery to us,” she said.

The ninth in a family of 12 children and the youngest boy, Paula opened up about her conflicted sexuality sometime in high school. After graduating from San Sebastian College, she confessed to Yolanda her desire to undergo breast augmentation and then travel to Japan to work as an entertainer.

“I asked her, are you serious about that (surgery) because there is no turning back? And she replied to me, I am very sure of it, Ate.” Paula had a successful operation.

Paula is a very lovable, jolly, affectionate and caring sibling, she said.

“She is generous to the point of sacrificing her interests and comfort to satisfy and please anyone who comes to her for help.  She is the life and joy of the family. She is full of fun and laughter. Her culinary skill is unmatched,” Yolanda continued. “We all miss her terribly and desperately.”TheFilam