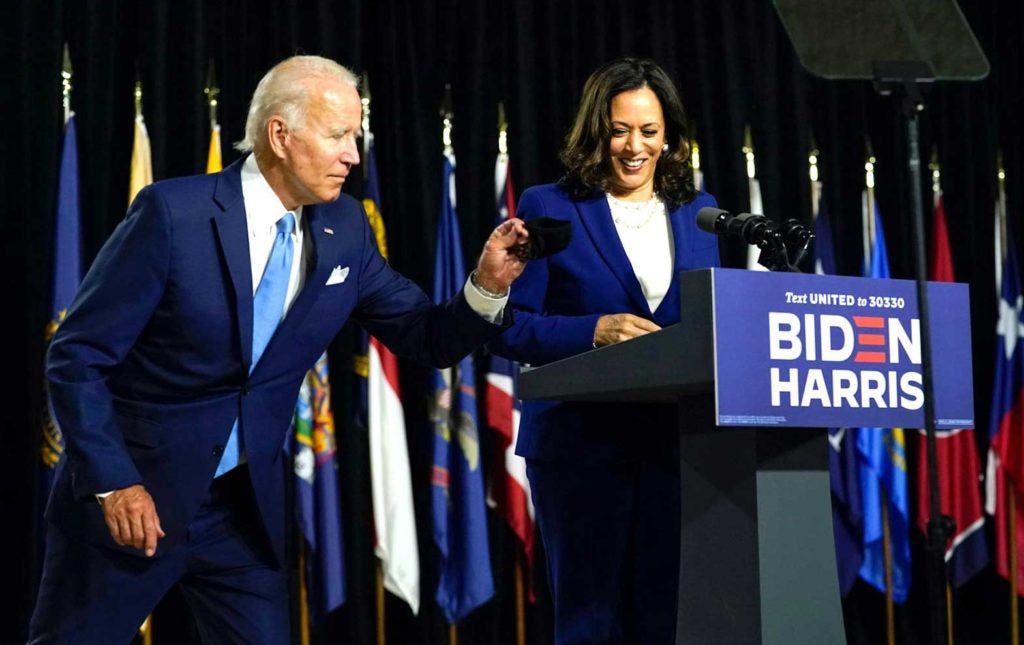 Let’s not bury the lead. Asian Americans are going for Biden by a large margin, 54 percent to 29 percent, according to the latest AAPI Data survey, which polled more than 800 people in July in the top six Asian American groups including in-language in Chinese, Vietnamese and Korean.

It is the Asian Americanest of any poll, with an adequate sample size to give us a sense of what’s to come in November from AAPIs, according to Janelle Wong, the University of Maryland professor with AAPI Data.

It still means one in three Asian Americans like Trump. That means between “Eeeny”  and “Meeny,” and “Miny,” there’s still someone you have to watch out for.

But note, the survey took place before the veep pick. If the survey were done today, I’d say that pick is likely going to blow up the survey in favor of Biden by a huge margin.

Filipino Americans who love Trump better get used to saying it. She is going to punctuate the Trump narrative but good for the next 80 or so days.

When I asked Filipinos in 2016 why they voted for Trump, they would always say, “Because of Hillary.”

If they’re looking for misogynistic and racist reasons to vote against the Dems in 2020,  they can try to muster the same amount of hate this time around.

But Harris isn’t a darker version of a pant-suited female pol. She’s fairly substantial, which is why Trump’s initial reaction to Biden Harris together was a pretty wimpy ad-hominem, calling Harris “nasty” and the worst, meanest Senator around.

You mean she’s meaner than Trump? Well then, time to dump Trump, my conservative Filipino friends.

Harris is the feel-good politician of the hour. Being Joe Biden’s pick for veep means if something happens to elder Joe, Kamala is it. Does that make you feel good? What balances out a legacy warhorse from Delaware better than a fiery and energetic Black and South Asian woman of Indian descent from California?

Indeed, what the media and people call her will be one of the telltale signs of how change is occurring in this country. We can claim her as an Asian American sister.  But she is surely more than that.

The media is learning. Already in the first stories about the announcement, , she was called the first Black vice presidential pick from a major party. But why exclude the Asian part from her mother’s side? She’s the first person of Asian descent to reach this level of power. The only inclusive and accurate journalistic description is to dump the clearly inadequate “first Black” short and spell it out. Harris is the daughter of a Jamaican father, a South Asian Indian mother, both immigrants and raised in California.

Obama was always Black, despite a white mother. Will they ignore the maternal side again with Harris, or will America begin to  sing diversity’s praises?

Harris has the look, the appeal, the charisma of what I trumpeted as the New California, and later, the New America. It’s the America that we’ve been talking about since 1989, when demographers first predicted the country would become majority-minority by 2050. Then the prediction was shortened to 2030. And now for some cities and states, the future is here.

And that’s what Harris represents historically, socially, culturally, and politically. She’s a unique first. Trump likes to use the phrase, “the likes of which no one has seen before,” but he just pulls a string and out pops a cliché to make him sound special. A VP pick like Harris truly hasn’t been seen before. In a presidential race where three of the four participants are calcifying white men, there’s only one person who truly represents me, and possibly you, my dear reader.

And yet truthfully,  I’ve always had my reservations about Kamala Harris.

What does she stand for? It’s not ideological or even about race.

Like all good politicians, she’s for Kamala. She plays to win. And she says what she says to win.

I don’t begrudge her that. But it is her “Trumpy” side.

It also makes it hard to say what she’s really about. What will be her walk up song at the convention? They could play an instrumental version of the Boy George hit, and we’d all be thinking “Kamala Chameleon.” The fact is, you don’t make assumptions about Kamala Harris. On CNN, Sen. Mazie Hirono said Harris would be a staunch supporter of Asian American issues. For example, all this “Chinese flu” nonsense from Trump’s mouth has resulted in anti-Asian violence. Harris will have our backs, right?

Maybe now, because it serves her. But who knows?

San Francisco Asians attacked
When I was a columnist in SF, I questioned why Harris as San Francisco District Attorney didn’t go after white hooligans who had terrorized Asian Americans in San Francisco’s Sunset District. She had no good answers. Was she appeasing the diminishing but still formidable white power structure in SF at the time? She didn’t really come to the aid of the Asian Americans who had been attacked.

I raised other issues in this when she ran for president  last June, such as her stance on criminal justice reforms that ran counter to many in the community.

The fact is, Kamala knows how to shimmy through the political minefield and survive. She knows how to court power, and how to battle for what she wants. It’s the skill of a politician. She’s even better at it than Trump, who’ll just lie and make things up. Harris is so much smarter than that. She uses facts.

In the presidential campaign, she was all out for the top spot and went hard against Joe Biden, whom she essentially accused of being racist. It nearly crippled him in last summer’s presidential debates.

But it wasn’t enough to beat Biden. In fact, the momentum didn’t carry Harris through Iowa. And by South Carolina, Blacks were listening to Rep. Jim Clyburn as he breathed life into Biden’s campaign and carried him on his back. Fortunes were reversed. Biden was up. Harris’ hopes were done. And then the pandemic began.

Most people caught in that political matrix probably would keep their distance, avoid each other at all costs for the rest of their lifetimes. But not the best politicians, who somehow find a way to survive together, because it’s the only way the wounded are made whole again. Working together means winning.

Biden really had no other choice. Susan Rice? Smart, but not battle-tested like Harris. And then there’s the ghost of Hillary’s e-mails that haunts her. The GOP was ready with the oppo research. Rep. Karen Bass was a finalist, but she faced red-baiting attacks. Trump was already molding the Democrats into his ideal “far left” opponents.

Actually, this ticket is hardly “far left.” If anything, it’s leftover Obama moderates. You know, the guy who gave us DACA, as well as led the league in deportations. Oh, the contradictions. We must accept them grudgingly. At least it’s not the 20,000+ misleading or inaccurate statements over the last four years from Donald Trump.

The campaign to come
And so we get Biden and Harris. She is living proof of American diversity. A Black and South Asian American, Woman—a champion three-fer, with law-and-order cred the kind that pleases a Karen and a Karl. Mix in acceptable liberal views on abortion, immigration, and civil rights, and you’ve got someone who can prop up Joe Biden the entire run.

As a speaker, Harris definitely has the firepower.to prosecute Trump and Pence together, with or without a face mask. She can attack on demand, and it will not look pretty for Trump, whose best riposte is to call an outspoken woman “nasty.” Harris isn’t nasty; she’s just so much smarter than Trump that he will wish he was running for King of Thigh-land. (Yes, he did say “Thigh”-land recent. Maybe it was the club where he met Stormy Daniels?)

It all means we are going to have the ugliest presidential race in American history with the most polarized electorate fighting off a deadly virus.

Trump’s going to see if having 30 percent of American voters is enough to win, amidst election trolls and foreign interference in our democratic process.

For Biden, Harris can do the heavy lifting, leaving Trump tripping on his ties and his tongue.

So, as America goes through its reckoning that began with George Floyd, Harris will represent the promise of a government that looks like America–not a government that is run like a bankrupt business. Trump will try to be his fear-mongering, xenophobic best. It’s going to be a fascinating next three months of contrasts between the new and old America. Which vision of America prevails? The one that’s wants to evolve and change in a new multiracial way? Or the country nostalgic for racism, sexism, and homophobia?

I expect Harris to bring out the worst in Trump. And she will punch back. Watch her on Wednesday when she Zooms into the Democratic convention.  She won’t be a cheerleader in an arena. But something tells me she’ll know how to go for the heart and the jugular at the same time. She’s the political animal the Biden campaign needed. Let’s see how well it works this week.

Emil Guillermo is a journalist and commentator. He writes a column for the North American Bureau of Inquirer.net. Twitter @emilamok Listen to his podcasts on www.amok.com