Why the general acceptance of patriarchal authoritarian rule?

Why the general acceptance of patriarchal authoritarian rule? 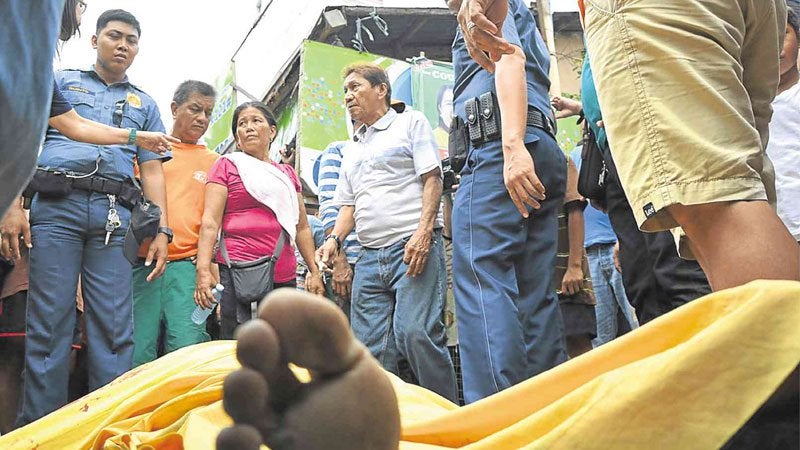 Spectators surround the body of a victim of extrajudicial killing. INQUIRER FILE

I recently had dinner in San Francisco with a wealthy Filipino who lives in a gated community in Makati, is an active member of a conservative religious group, Opus Dei, a staunch opponent of abortion and an avid collector of guns. He would normally fit my stereotype of a Duterte supporter but, surprisingly, he was vehemently opposed to the extrajudicial killings being encouraged and perpetrated by Pres. Rodrigo Duterte.

“I cannot oppose the taking of unborn human lives and support the killing of fully grown human beings,” he said.

What he professes to not understand, he told us, is why his mother, his sister and his wife all embrace the mass killings of Duterte.

“I mean they all go to church and pray fervently to the Holy Virgin Mary, they are good Catholics, and yet they accept and condone state-sanctioned murder. Why?” he asked.

A few months later, I heard a visiting priest from the Philippines speak of his personal experience of driving home in his village in Nueva Ecija when he saw a still figure lying on the road. It was the bullet-riddled corpse of a man whose hands were bound behind his back. He called the police authorities who identified the man as one who had registered as a drug user when Pres. Duterte called on drug addicts to come forward and over 700,000 Filipinos voluntarily turned themselves in

Because there were no rehabilitation facilities to enroll them in, most were released on their own recognizance after they had registered. But now, their dead bodies were sprouting everywhere.

The priest decided to set up a safe haven in his hometown for the drug addicts who had voluntarily surrendered and 200 scared men crammed into the small house he had set up. The priest asked the police authorities in his town not to kill any of the men housed in his sanctuary and, he reported, so far, they are safe.

University of Washington Prof. Vince Rafael recently recounted on Facebook his conversation with Manila-based New York Times writer Aurora Almendral who personally witnessed the crowds that formed around the victims of extrajudicial killings. “They were often festive, treating the whole scene as if it were entertainment. People mugged for the camera, they laughed, made jokes, took bets on whether they knew the victim. Hearing about the killings, they would speculate about the victim’s appearance. It seemed reminiscent of lynching scenes in the Jim Crow south or public hangings in 18th century Europe,” she said.

Filipino community members attend a hearing by the Tom Lantos Human Rights Commission of the US Congress. INQUIRER FILE

According to Aurora, the crowds surmised that “the victim was an addict, he or she had it coming.” Relatives of the dead would bewail the decision of the authorities to kill their loved ones instead of just arresting and jailing them, but then would turn to the dead and blame them for bringing it upon themselves for doing drugs.

Vince added, “It is the logic of scapegoating, one that has become the substance of daytime shows like ‘Eat Bulaga,’ for example, and lies at the core of Duterte’s political speeches. Blaming the victim, scapegoating also exalts the force that puts an end to its life and offers its corpse as the assurance of safety and protection. But it is also about generating fear for one’s safety that then drives one to look for protection in the murderous acts of authority. Conjuring a state of emergency, authorities capitalize on uncertainty and offer drug addicts and other criminals as the source (rather than the symptoms), and their summary execution a cure to such ills.”

When we gather in San Francisco church halls and private homes to discuss the gruesome murders that are regularly taking place all over the Philippines as part of Duterte’s all-out war on drugs, we are left incredulous about why so many Filipinos in the Philippines have passively accepted these murders.

Amnesty International reported that there were 2,500 extrajudicial killings under Marcos during the 14 years of his dictatorship and there was universal revulsion at the depraved taking of life. But in less than one year, Duterte has more than quadrupled that number. In January of 2017, the last time the Philippine National Police (PNP) kept a monthly tab of the number of killings in the Philippines, the death toll was: 7,080 as of January 31, 2017. Deaths due to police operations: 2,555 as of January 31, 2017. Number of policemen who were removed from service for botched police operations: 0. Deaths under investigation: 3,603 as of January 9, 2017. Murder cases: 4,146 as of January 9, 2017.

In a July 30, 2017 article, (Philippine police ‘dumping bodies’ of drug war victims), Al Jazeera reported the fishermen’s disclosure that they have been dumping bodies of drug suspects, killed as part of the country’s so-called war on drugs, on the orders of the police.

“Before February 2017, the (PNP) actually had a higher number, and they decided to lower it April and May which didn’t make sense for us,” said Wilnor Papa of Amnesty International. “Is it because the world is watching, is it because people are saying there are too many deaths? As far as we’re concerned it’s not just the numbers, but for us, one death is a death too many,” he told Al Jazeera.

Aurora Almendral stressed this point: “We’ve been so focused on the gruesome images of dead bodies and on the ramblings of the great leader, but we’ve failed come to terms with the crowd who comes to watch. For them, it is not about fearing the police so much as feeling reassured that it is the victim, and not them, who is dead. They come to accept the narrative that addicts are subhuman and pose an existential threat, and so bring upon their own death.

“The police are feared, but in fearing the police they also see them as those who restore a kind of order. Not an order that necessarily benefits them, but an order that keeps things in their place, that makes life predictable, that tells them that a source of power exists and that they can avoid it, negotiate with it, even as they fear it. In the end, it is safety that comes with fear, authority founded on killing, that they–we–seem to prefer over something much more abstract like human rights or even social justice. Thus, the essential conservatism of Filipino society, one that underlies this seeming acceptance (even if with areas of dissent) of patriarchal authoritarian rule.”

This “acceptance of patriarchal authoritarian rule” explains why the Filipino people have enthusiastically supported the imposition of martial law in Mindanao on May 23 and its extension through the end of the year by a joint session of the Philippine Congress on July 22. The conflict in Marawi City has led to the deaths, according to the Philippine military, of 420 militants, 100 soldiers and 45 civilians. His conversation with Aurora Almendral led Vince to reflect on the fact that Duterte has already declared martial law all over the Philippines without formally doing so: “The cultural logic of Martial Law is woven into the very fabric of social institutions. When malls are heavily policed, when armed security guards are everywhere found, every corner equipped with CCTVs, when schools search their students (because students and parents desire to be searched in order to feel safe, and students, even those in UP, brag about how well-policed their campus is), ‘martial law’ is less a legal state than a state of mind deeply ingrained in even the most liberal of Filipinos who prefer hierarchy and authority as the guarantors of safety above democracy. A compliant citizenry, as against a self-assertive one.”

Against this backdrop of seeming hopelessness is news of the congressional hearing in Washington, DC of the House Human Rights Commission on July 20 where testimonies against Duterte’s war on drugs were given.

Ellecer Carlos of the Philippine-based iDefend Coalition accused the Duterte government of denying due process to the EJK victims who were mostly poor people and of cheapening the value of life in the Philippines. He said further that the government only gives lip service to drug rehabilitation as an alternative to the killings.

Rep. James McGovern (D- Massachusetts) co-chair of the Human Rights Commission, declared at the conclusion of the hearing: “I certainly believe very strongly, a man with the human rights record of President Duterte should not be invited to the White House, and if he comes, I will lead the protest.”

In response to McGovern’s threat, Duterte announced in Manila that he would never go to the United States, which he called a “lousy” country.

“There will never be a time that I will go to America during my term, or even thereafter,” said Duterte.

Perhaps Duterte can also consider the Philippines a lousy country and leave.