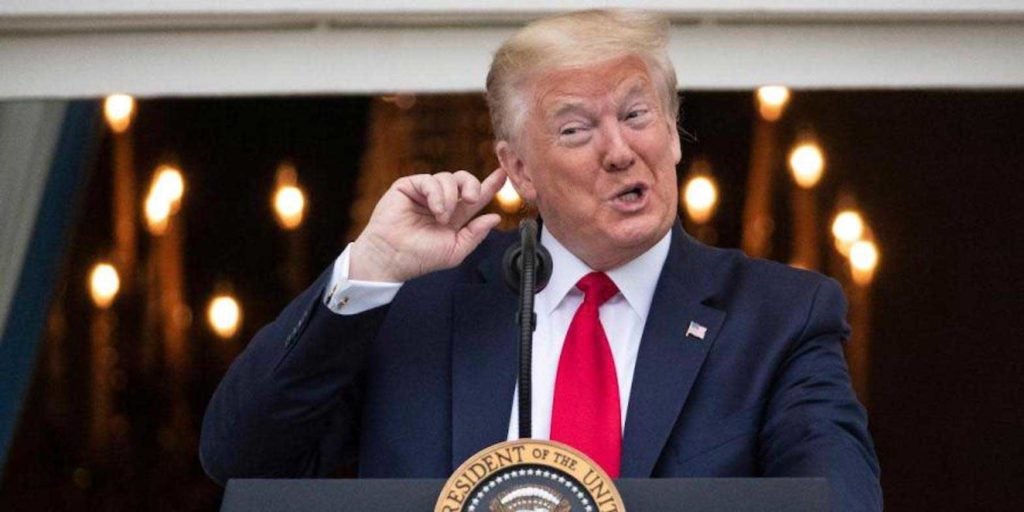 My friend is selling his mother’s house after her passing from Covid. He can’t believe people are coming to see it—without masks.

“I tell them don’t come to our house without masking up,” my friend said. “They’re not masking anywhere.”

Well now they are. It’s mandatory in counties representing more than 70 percent of California after massive spikes in cases the last week.

Shouldn’t we have a national policy by now on masking to fight the pandemic?

I told my friend we’re only as smart public health-wise as our dumbest link. Unfortunately, that’s the president of the United States.

And he’s insistent on making masks optional, but racism mandatory.

Here’s New Yorker Tiffany Chu describing a man who walked up to her and just started talking: “And he said, ‘Trump says all Asians have coronavirus,’ you disgusting (expletive deleted).’”

The man didn’t stop there.

“He called me a bunch of other things,” she said. “He started spitting at me…I looked around and of course no one wanted to acknowledge that anything was happening.”

That may be the worst thing about all this. That suddenly everyone was minding their own business, didn’t want to speak up to defend Chu.  Or maybe they were fearful of catching something from her?

Tell me you haven’t experienced this, or something similar, because these incidents are happening folks.

And now we need another vaccine, against this.

Call it the “Kung Flu Fallout,”  America’s new micro-aggression toward Asian Americans stoked by the ignorance of the leader of the free world and President of the United States, Donald J. Trump.

Since his utterances of the Asian slur at his recent Tulsa and Phoenix, Trump has become the super-spreader of racial animus against Asian Americans, whose experiences were  captured by USA Today.

It coincides with a new study from the Pew Research Center that shows that nearly 40 percent of Asian Americans and African Americans say they’ve faced a spectrum of racism from slurs to physical attacks  during the pandemic.

That’s compared to 27 percent of Hispanics, and  13 percent Whites who said they had experienced anything similar.

The study shows a new pandemic  basis for solidarity between African Americans and Asian Americans, where around 40 percent of both groups said there was concern about the suspicions brought out from wearing a mask in public.

If you’re like many Asian Americans of Filipino descent  feeling the sting of the “KF,” speak out.

I know, rarely do Asian Americans speak out. Most of the people on the USA Today video are under 40. But now is the time.

As we celebrate our independence, let freedom ring– from the sound of your voices. If you’ve been subject to these kind transgressions, call out the moments of the KF virus. (Contact me. I’ll share your story).

At this time , the proper vaccine against these transgressions is called voting. That’s how important it is this year. Don’t forget.

It’s a bit strange in a democracy when the perpetrator of the microaggression against an  entire ethnic and racial group is the president of the United States.

Trump seems to be incapable of real leadership when it comes to matters of race and coronavirus.

Trump must be bored

We should have known it would get this bad. After just his first few days in office, Trump had already exhausted all the great clichés of political metaphors not involving baseball or sports.

He just keeps topping himself as to the greatest example ever of “ Emperor with no clothes,” or “Nero fiddling as Rome burns.”

Consider that after major spikes in Covid-19 cases in 28 states in 14 days,  California and other states are shutting down again after opening too soon. Even Dr. Anthony Fauci warned Congress this week and expressed  his concern that he “would not be surprised if we go up to 100,000 (cases) a day if this does not turn around.”

But here’s how the president showed leadership in an interview on Fox Business on Wednesday:

“I think we’re going to be very good with the coronavirus. I think that at some point that’s going to sort of just disappear.”

Nero Fiddling? How’s this for a master stroke. Trump’s not even using a bow.

Nor a mask. And he could have no clothes (though from the video he is clearly dressed by Zoom standards).

Trump’s  a mixed metaphor– just like his message. It’s like nothing we’ve never seen from a POTUS. And that’s distressing.

Now he’s even allowing VP Mike Pence to appear WITH mask, but while staying on the Trumpian non- message:

Said Pence in Phoenix this week: “I could not be more proud of our nation’s response to the corona virus pandemic”

Proud of a single-day case record for a fifth time in a week?  50,000 new cases on Wednesday alone.

Time for all good Republicans to wear a mask and social distance from the president. Political distance will come eventually. And we haven’t even talked about the  Russian bounty dereliction or all the Tell-All books.

Replacement fireworks abound. So enjoy the Fourth. Stay safe and sane. Stay home.  Protect yourself from all viruses including Trump’s KF.

Consider it delayed gratification. Save the real fireworks for November 4th.

Emil Guillermo is a journalist and commentator. Twitter @emilamok. Listen to “Emil Amok’s Takeout” on amok.com.