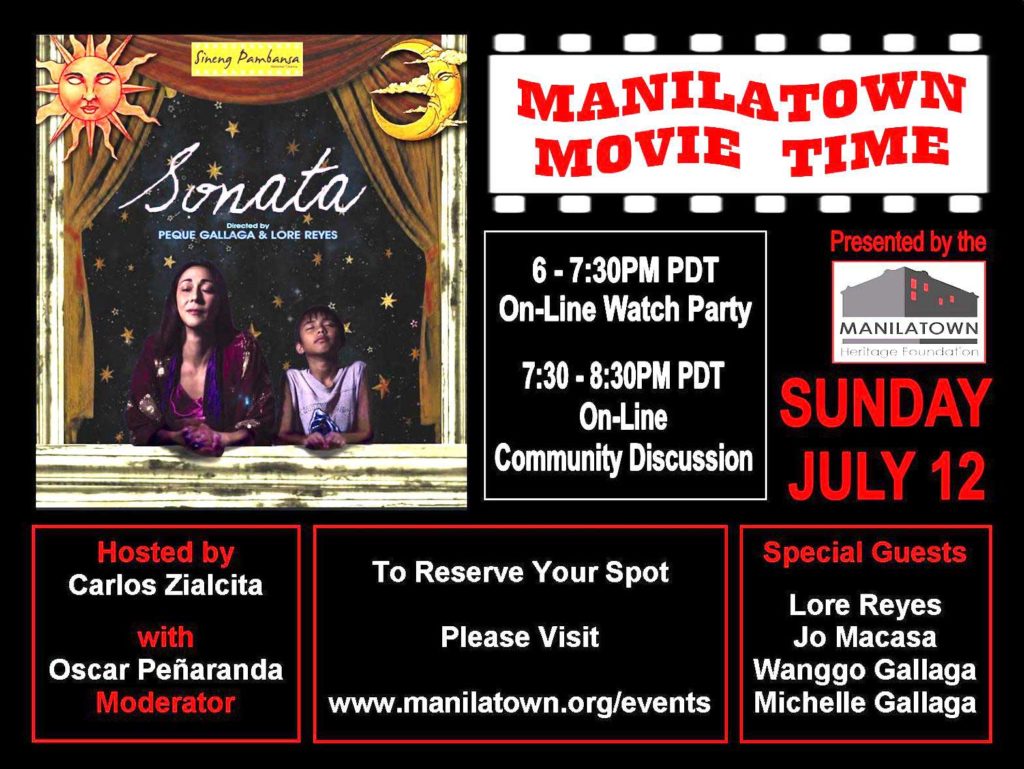 Please join the Manilatown Heritage Foundation for an Online Manilatown Movie Time Watch Party of the award-winning film Sonata followed by a Community Discussion with the Sonata creative team.

Host Carlos Zialcita will start the Watch Party at 6pm and Moderator Oscar Penaranda will begin the Community Discussion at 7:30pm. Upon registration on EventBrite you will receive a link to this online event.

This evening’s Panel will include:

Co-Directed by the late Peque Gallaga and Lore Reyes, Sonata is about Regina Cadena (Cherie Gil), a former opera diva who, following the loss of her voice and the subsequent collapse of her career, goes into a deep depression and self-exile. She gets reinvigorated by a precocious young boy (Carlo Jalandoni) who helps bring back her smile. This heartwarming 2013 film received five awards and 23 nominations from various international film festivals including the 2014 Gawad Urian Award for Best Music given to Ermerzon Tecson, and the 2015 ASEAN International Film Festival Award for Best Actress given to Cherie Gil.

Maurice Ruiz de Luzuriaga Gallaga (1943-2020), better known as the legendary Peque Gallaga, was a multi-awarded Philippine filmmaker whose body of work reads like a collection of Philippine cinema’s classics. His most notable films include Oro, Plata Mata (1982), which he directed after winning a script writing contest sponsored by the Experimental Cinema of the Philippines, a segment from Shake, Rattle & Roll (1984), Scorpio Nights (1985), Magic Temple (1986), and Tiyanak (1988), to name a few. His last listed work was a short, Tabang, in 2016. He has received awards from the International Film Festival of Flanders-Ghent and the Manila International Film Festival, among others, and he was awarded the Philippines’ Gawad CCP Para sa Sining in 2014. The Gawad CCP Para sa Sining is given every three years to artists who have consistently produced outstanding works, enriched the development of their art form and have helped to develop and enrich Philippine art. This is the highest award given by the Cultural Center of the Philippines (CCP) to Filipino artists and cultural workers.