A call for Philippine indigenous history, a call for inclusivity

A call for Philippine indigenous history, a call for inclusivity 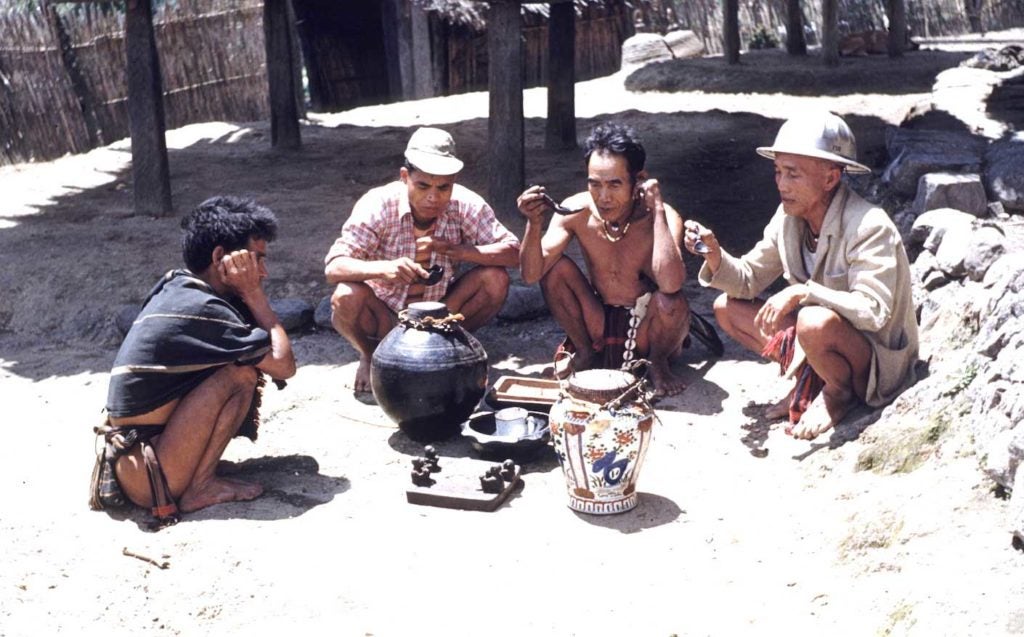 A group of mumbaki performing a rice ritual in Eastern Ifugao in the 1950’s. The dark jar is dinolman; the white jar is galgalit. Note the use of pakko for drinking rice wine. Probably a rice ritual because of the use of the pamâahan wine bowl. It is in eastern Ifugao because of the flat lidi or rat guardof the house. The two mumbaki are wearing Kiangan loincloth though (description by Marlon Martin. Photo taken by Dr. Wilhem Solheim which was provided by Dr. Bion Griffin to Stephen Acabado).

The recent protests against injustices in the United States catalyzed by the death of George Floyd underscored anti-blackness sentiments of some Filipino immigrants. In a sense, these echo the attitudes of many Filipinos against our Indigenous populations, particularly, the many Aeta groups.

In this essay, I invite the readers to critically examine what we learned in the Philippine educational system and how the lessons characterize our sense of being Filipino, especially in relation to the apparent anti-blackness sentiments or pro-white concepts of beauty and kindness.

I would like to start by saying that there is no excuse for degrading views about other ethnicities – or about others – period. Recent events that reprised injustices and the continued racism against black Americans accentuated the colonial structures that define Filipino identity.

I am not here to justify the perspectives of many Filipinos and Pilipinx (a decolonizing and inclusive term used by the Filipino diaspora as response to white-centric binary categories of the places they immigrated in) because of our exposure to the inherently racist Waves of Migration Theory that associates color of the skin with intellectual capacity and technological sophistication. The waves of migration model claims that there was a succession of arrival of different groups of peoples, with varying biological and cultural sophistication (there was a very specific racial typology, with each wave getting lighter and lighter as the level of culture got “higher and higher”).

This model came into play in the 1904 St Louis World’s Fair that showed the various ethnic groups in the Philippines, in varying degrees of cultural sophistication. The Human Zoo, as contemporary scholars call it, juxtaposed Christianized Filipinos with those of groups who actively resisted conquest. This event justified the American occupation of the Philippines, because, as they put it, “to help our little brown brothers govern themselves.” This idea continues today; that there is a need to assimilate the 175 or so ethnicities in the Philippines to be Filipino.

I am here to advocate for a change in Philippine curricula and Pilipinx education that highlights our indigenous history; our diversity; instead of focusing on forced assimilation that characterize the benevolent assimilation policy of the American colonial government. I am not, however, arguing that we abandon our identity as Filipino, but instead, highlight the fact that Filipinoness is not just Tagalogness; it is more.

It has been over a century since the institutionalization of our history curricula. They have never been updated since. Basic history classes and textbook still teach the waves of migration even if generations of historians and archaeologists have refuted the racist basis of the model. If we are to mold our citizens to be inclusive, to be appreciative of diversity; if we are to ensure that Pilipinx generations are more secure about their identity, we need to reject flawed narratives in our history. Doing so will empower indigenous Filipinos, strengthen our identity, and to truly make Filipino, Filipino.

I also hope that this facilitates our appreciation of the human diversity, of the human experience. As immigrants, we contribute to the magnificence of US diversity. Even though we have deep and painful colonial experiences, they do not give us the privilege to ignore the injustices that other groups suffered and continue to suffer. In the end, it is common decency, and basic humanity. #BlackLivesMatter

Stephen Acabado is associate professor of anthropology at the University of California, Los Angeles. He writes this essay as a call to mold the future of the Philippines and Pilipinx guided by inclusivity through a shift in Philippine history curricula and Filpino heritage education in the United States.