Racist monuments must go, including The Hiker

Racist monuments must go, including The Hiker 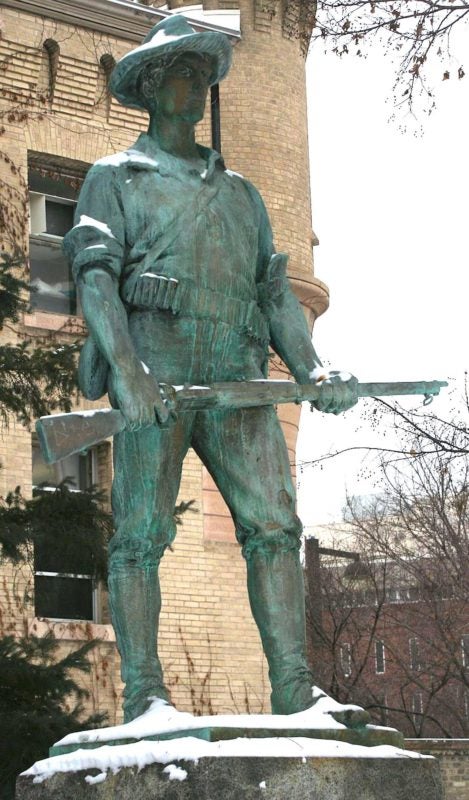 On June 12, we honor the first Republic of the Philippines created on 1898. But Emilio Aguinaldo’s historical presidential moves today can’t help but be dwarfed by the actions of another president.

Is there any doubt now that Donald Trump wants to be the white racist president in Nov. 2020?

He wants to move the GOP convention to Jacksonville on Aug. 27, the day of the 60th anniversary of one of the bloodiest KKK rallies in history.

He wants to hold a rally on Juneteenth, (June 19) the day Texas slaves found out they were free in Tulsa, scene of one of the worst riots were whites ravaged a prosperous black community.

He wants to keep honoring Confederate generals by having their names identify our biggest military facilities.

And just think, at the beginning of the 2016 campaign when the GOP was talking “big tent” politics and diversity. But then Trump won over  the people because he wasn’t a politician. People were willing to go with a businessman who was latent racist.

Today,  there’s nothing latent about Trump. He’s become political in everything he does. And his moral compass is to do anything and everything to protect American white supremacy and the memory of historical racism.

And it’s all coming as George Floyd murdered and buried and the country is expressing its outrage.

If Donald Trump had a shred of humanity, he’d offer real solace to the Floyd family in a way that could surprise us all. Do something nice, like invite them into the White House for some comfort.

Who would expect that photo op? Maybe even a trip to the bunker.

Trump is the only president in recent history who can make a sincere common sense gesture seem like a damn joke.

That’s how much Trump has set back American political sensibilities. So thank god for George Floyd.

More than two weeks after Floyd’s death, the country with its coast-to-coast protests seems ready to address racial justice issues like never before.

It’s people power fueling a political will, with policing just a first step toward disassembling structural racism in our country.

But Trump remains clueless as to what should be done. Instead of trying to unite the country, step by step, he takes a reasonable idea like renaming military bases that honor Generals Bragg, Benning, and Hood, Confederates all, and stops it cold.

Even though top military officials supported the renaming, Trump won’t budge.  Said Trump on Twitter, the bases “have become a part of a Great American Heritage.”

Yes, and the generals whose names identify our military bases were on the losing side of the war that ended our shameful legacy of slavery, right?

This is what Trump wants to commemorate as people on the street declare that Black Lives Matter.

Trump ended his statement calling our history “the Greatest Nation in the World” and that it will not be tampered with.

But Trump should get on the right side of history, not just with changing the names of the bases, but by getting behind the removal of all the confederate monuments that continue to stand tall to this day as if the Confederacy were undefeated. On Wednesday, House Speaker Nancy Pelosi asked that statues of Robert E. Lee and Jefferson Davis be removed from Statuary Hall in the Capitol. Virginia’s Gov. Northam wants the massive Robert E. Lee statue removed from Richmond.

The living don’t need monuments that serve as painful reminders of a hateful and traumatic past.

Let’s hope we see a good many confederate statues removed soon. Letting them stand in modern times can’t be justified.

What is being honored? White supremacy without slavery is still despicably racist.

The Hiker
While the fever is high to remove the most odious relics of the Confederacy, now is a good time to mention a statue that is replicated throughout the U.S. in public parks and squares.

It’s called “The Hiker.” It was intended to honor the American Volunteer who fought Spain in Cuba, the Philippines, and the Boxer Rebellion in China.

At least, that’s what the statue’s inscription says. But the problem is with the dates on the statue. “1898-1902” really refer to the Philippine American War—not the Spanish-American war, which was all of three months and ended up with Spain selling the Philippines to the U.S. for $20 million.

It’s clear why the statue would want to conflate the two. In the Spanish American war, the U.S. was fighting one of the original old world imperialists, Spain. In doing so, it conveniently covers up the massacre that was the Philippine American War.

But on Feb. 4, 1899, U.S. forces began fighting the Filipinos and the Philippines declared war against its anxious new colonizer on June 2.

It was the Philippines that paid the ultimate price. It became America’s first colony. That’s not slavery, but it’s close. The chains aren’t real, just imagined.

What the hiker obscures

The end of the war thus began the U.S.-Philippine colonial relationship. Filipinos provided a labor force of newly minted “American nationals” to pick pineapple in Hawaii and asparagus and other crops in California. The colonized Filipinos also faced the kind of discrimination that blacks saw in the South. Signs in the Central Valley in California said “No Filipinos Allowed.” Filipinos weren’t able to own land. Nor were they able to start families easily since few Filipino women were allowed to come to the U.S.

More significantly, there were anti-miscegenation laws that said when it came to marrying whites, Filipinos were just like Blacks, forbidden. And if they didn’t abide, they were killed.

All that American history is obscured by a statue known innocently as the “The Hiker,” the American Volunteer who climbed the mountains of the Philippines to fight the guerrillas in a war that claimed hundreds of thousands of Filipino lives, who were often referred to by the heralded Americans  as “n*ggers.”

It is the forgotten war of America’s racist Imperialism. Coincidentally, the original statue, nine-feet-tall atop a six-foot granite base, was placed at the University of Minnesota in 1906.

Twenty-six hikers by Theodora Ruggles Kitson are scattered around the country, as well as 24 replicas by other artists. The hiker is all over the Boston suburbs, like Waltham, Malden, and Cambridge. The statue is in big cities like Chicago and Nashville. He’s in the South in places like Columbia, South Carolina, and Montgomery and Birmingham, Alabama. The Hiker is in Baltimore, Austin, Palm Beach, and even Sacramento. And he’s at the entrance point to the Arlington National Cemetery.

The statue went viral, you might say. Now the disease it represents finally must be eradicated. While we’re talking about taking down the Confederate generals off their high horse, don’t forget “The Hiker.”

Some statues have plaques that have been corrected. But that doesn’t fix what the hiker truly represents: a cover up of the Philippine American war, one of the deadliest wars in American history, a dangerous mix of American imperialism and White Supremacy.

Had he known about it in the city where he was murdered, George Floyd certainly would have wanted it down.

EMIL GUILLERMO is a journalist and commentator. He is the director of the Filipino American National Historical Society Museum. Twitter @emilamok. Listen to his podcasts, “Emil Amok’s Takeout” on amok.com.