Duterte’s ‘war on drugs’ gets mixed reviews in DC 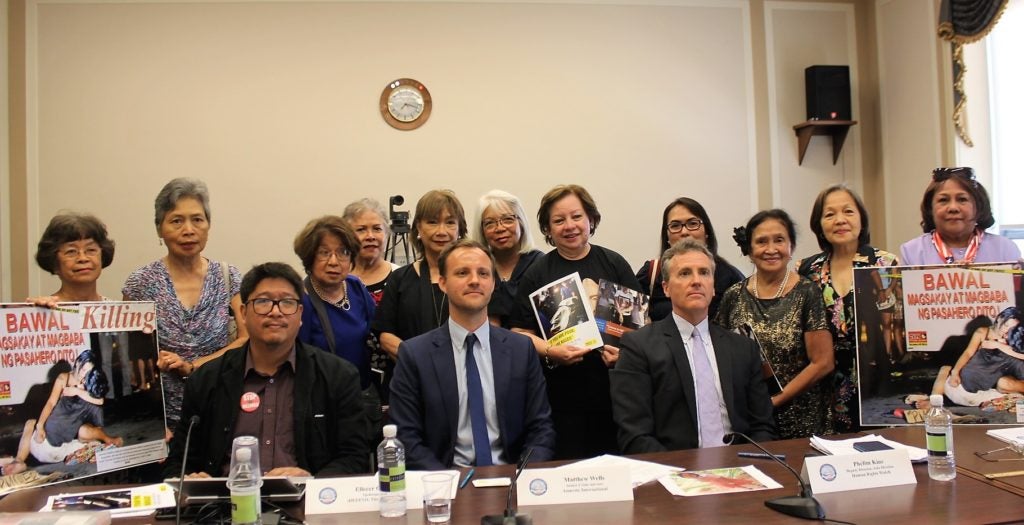 Filipino Americans in the DC area pose for a group photo with the human rights activists after testifying before the Tom Lantos Human Rights Commission. INQUIRER/Jon Melegrito

WASHINGTON, DC — The US President has weighed in. So have the US State Department and the US Congress. Voices from the media and the international human rights community are getting louder. And sharply divided Filipino Americans across the country have been making their views known about a man and his methods. The controversy about President Duterte and his ‘war on drugs’ is not going away anytime soon.

Detractors blame Duterte for the extrajudicial killing of thousands of drug users in the Philippines, but his defenders are equally vocal in dismissing those charges.

No less than President Trump himself congratulated Duterte back in April for doing an “unbelievable job on the drug problem.” As if praising him was not enough, Trump – who has an affinity for despotic leaders – invited the Philippine strongman to visit the White House.

That set off alarm bells in Washington.

Human rights group, like Amnesty International, said the invitation puts a US stamp of approval on Duterte’s “war on drugs” that has allegedly killed as many as 7,000 people since he took office. 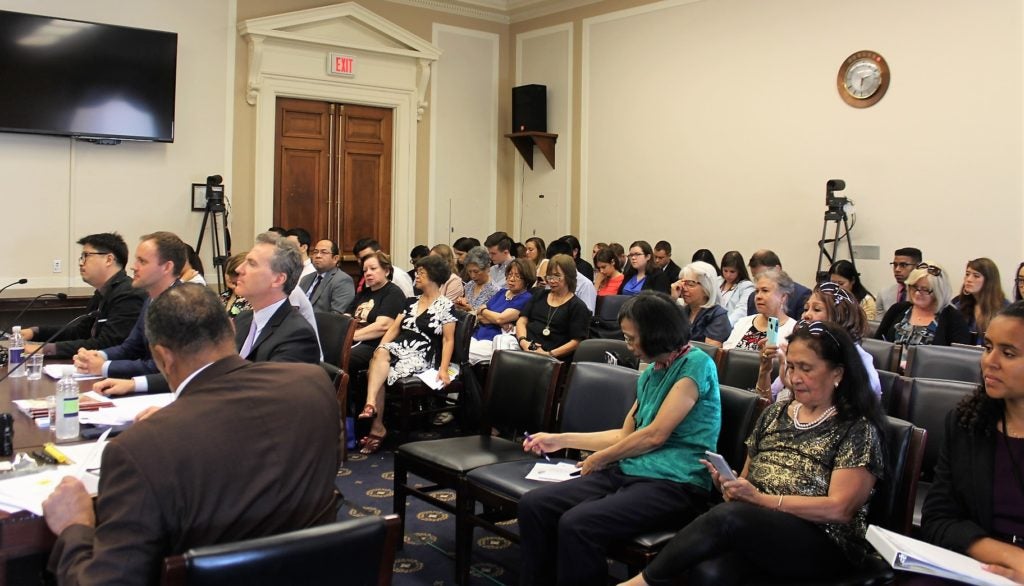 Their claims are validated by the State Department’s “Country Reports on Human Rights Practices for 2016,” which was updated in March 2017. In its assessment, the State Department noted that “extrajudicial killings increased sharply over the past year” and that “police and unknown vigilantes have killed more than 6,000 suspected drug dealers and users as the government pursued a policy aimed at eliminating illegal drug activity in the country.”

On May 4, two days after Trump invited Duterte, Republican Senator Marco Rubio and Democratic Senator Ben Cardin introduced S. 1055, “The Philippines Human Rights Accountability and Counter Narcotics Act.”   Cardin, the senior Democrat on the Senate Foreign Relations Committee, said he and Rubio wanted “to make it clear to President Duterte that there will be consequences for his barbaric actions.” The bill would prevent certain US weapons from being sold to the national police and support human rights and civil society organizations. 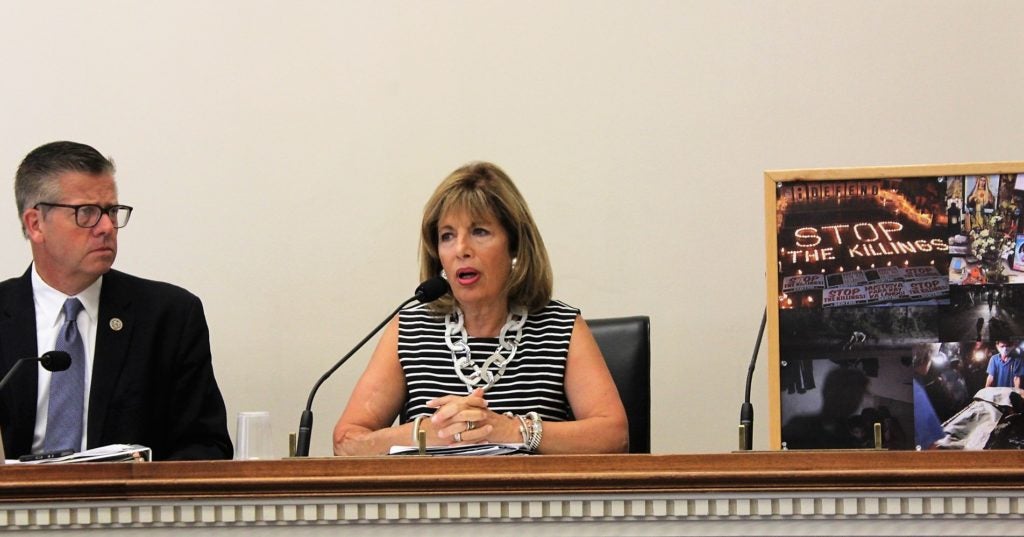 On July 20, the Tom Lantos Human Rights Commission (TLHRC) held a hearing in Congress on “The Human Rights Consequences of the War on Drugs in the Philippines.”

The Commission (formerly known as the Congressional Human Rights Caucus) aims “to promote, defend and advocate internationally recognized human rights norms in a nonpartisan manner, both within and outside of Congress, as enshrined in the Universal Declaration of Human Rights and other relevant human rights instruments.” As an investigative body, it makes recommendations to policy makers and legislators.

Carlos pointed out that “we have 40 to 50 killings every day of the most impoverished, beaten down individuals in Philippine society.” 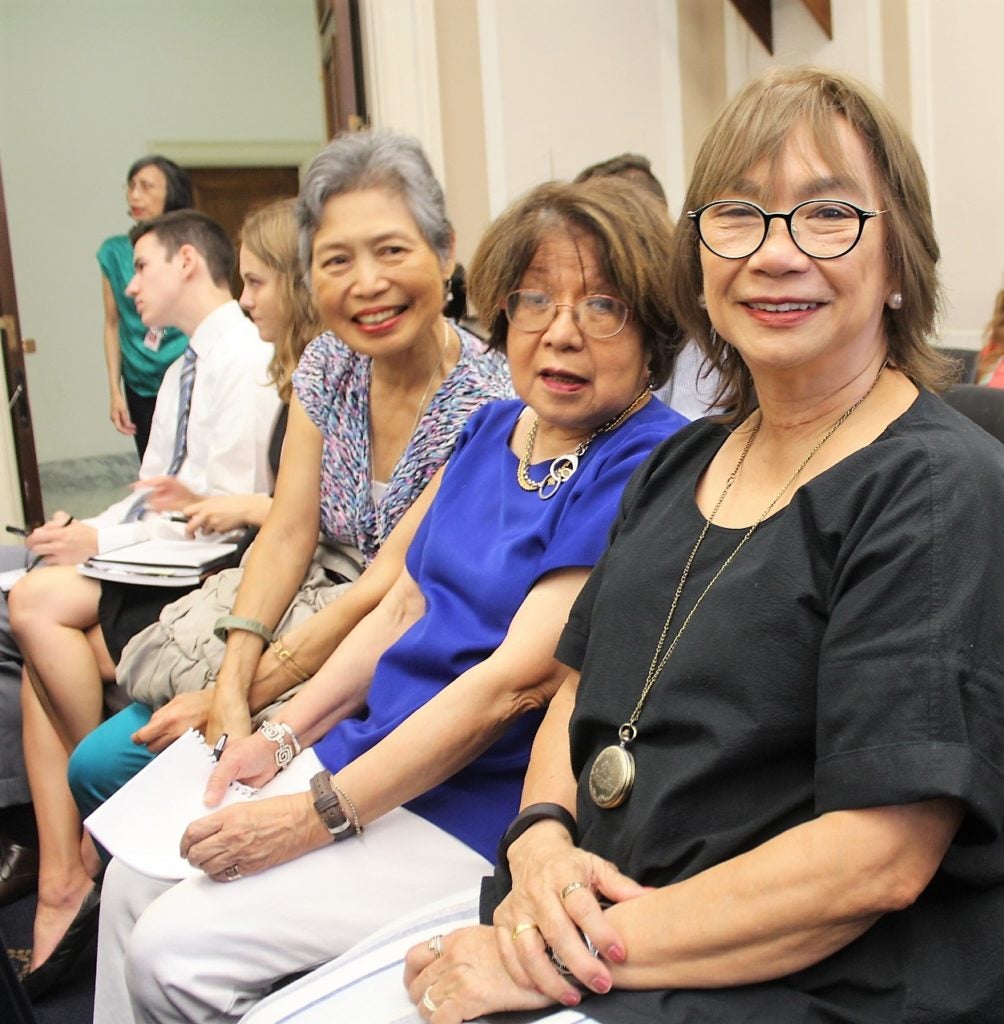 Alice Sabalones Tanoue (right) says listening to the witnesses reminds her of the human rights abuses of the Marcos regime. INQUIRER/Jon Melegrito

Wells decried the “economy of murder,” or “the endless demand for paid killers” whose targets are overwhelmingly people in the lower class. Kine said the Philippine government has “launched an intensive propaganda effort to deny the reality of a brutal slaughter mainly of the poor.”

All three activists called for restrictions on security forces based on strict human rights bench marks, reform of the judicial system and greater discipline of police forces, and a more public health-centered approach to the drug problem by prioritizing rehabilitation efforts.

They strongly recommended addressing the root causes of crime and drugs instead of engaging in punitive measures. “Harm-reduction programs are far more effective in the long run,” Carlos asserted.

TLHRC Co-Chair James P. McGovern (D-Massachussetts) agreed with the panelists, pointing out that “the US can’t afford any degree of complicity with extrajudicial killings, that’s why it’s important to make our concerns known loudly and clearly.”

To emphasize his point, McGovern said that “Duterte should not be invited to the White House, and if he comes, I will lead the protest against his visit.”

Rep. Jackie Speier (D-California), a member of the commission, is also troubled by Trump’s invitation to Duterte. “Trump obviously doesn’t care about human rights,” she said. “The US must not fall prey to bloody demagoguery.” 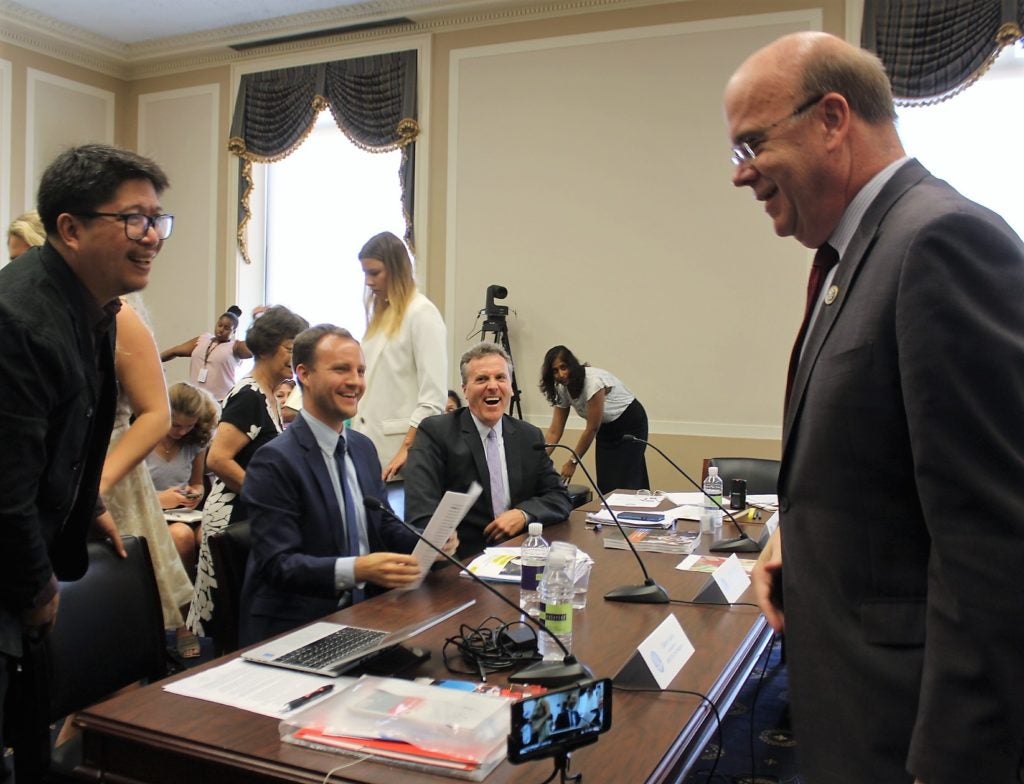 Judy Reyes Francia of Alexandria, Virginia, a former member of the Movement for Free Philippines (MFP), was among a dozen Filipino Americans who attended the hearing.

“I’m glad these hearings are being held,” she said. “We need to educate the American public about the alarming human rights situation in the Philippines. I hope Congress uses its influence to ensure that rule of law prevails,” Francia said.

Alice Sabalones Tanoue of Washington, DC, an anti-Marcos activist in the ‘70s, says that “listening to the witnesses reminds me of the human rights abuses of the Marcos regime. Why are we going back again to authoritarian rule? The impunity of killing so many human beings without due process is totally unjustified.”

But not everyone at the hearing shared these sentiments. Filipino American businessman Adjo Gonzales of Centerville, Virginia, dismisses reports of human rights violations.

“I don’t see any political motivation on Duterte’s part to be associated with these killings, and he shouldn’t be blamed for the actions of bad elements within the police or military,” he says.

“Duterte is actually addressing the drug problem head on, and within the bounds of the constitution. His instruction to police forces to shoot to kill when threatened is what gives this campaign its teeth,” Adjo says further. Gonzales adds: “What this commission is doing is actually counter-productive as it will only embolden Duterte to continue mocking the U.S. for interfering with a sovereign country.”

His point was amplified by the Washington-based US Pinoys for Real Change in the Philippines (USPRCP), which blasted the public hearing as a “kangaroo proceeding.”

The group had wanted to testify before the panel, but only its statement was entered into the record. USPRCP chairperson Arnedo S. Valera criticized the commission’s actions as “one sided” and “orchestrated by ‘serial critics’ who continue to mischaracterize the Philippine drug war.”

USPRCP called on the U.S. not to “destroy the already tenuous relationship between the two countries,” but rather support Duterte’s drug war, “especially the treatment and rehabilitation of more than one million drug addicts who have voluntarily surrendered.”

For its part, the Philippine Embassy, which was also not invited to testify, provided the commission with a booklet entitled “The Real Numbers” by the Office of Secretary of Foreign Affairs Alan Peter S. Cayetano. The statement basically questioned the way Duterte’s critics “changed the definition of extrajudicial killings (EJK), therefore deceiving the public and foreign media into believing that there is a sudden wave of state-sponsored extrajudicial killings in the Philippines.”

The statement points out further that “there is a deliberate attempt to include all homicides as EJKs or killings related to the campaign against criminality and illegal drugs, and that these are state-sponsored, which is simply not true.”

Contrary to the more than 7,000 EJK’s cited in media reports, the Duterte administration admits to only “3,116 deaths resulting from presumed legitimate law enforcement operation.”

There are more deaths due to police operations, it pointed out, because “more operations lead to more arrest, more surrenderees and, unfortunately, more who resist violently thus resulting in more deaths.”

‘War against the poor’

To some grassroots organizations, however, the Philippine government’s explanations and efforts leave much to be desired.

“The issue of drug-related killings is part of a war against the poor and marginalized people in our mother country,” said Jo Quiambao of Gabriela DC, a women’s rights group.

“It is not enough to put an end to the killings and investigate the perpetrators, but rather to understand the roots of poverty such as landlessness, joblessness, lack of national industrialization, and lack of basic needs, etc.” Quiambao notes further that the war on terror in Mindanao and the war on drugs are exacting a heavy toll on innocent civilians, “particularly women and children who will bear the brunt of these acts.”

Washington, D.C. resident Dante Simbulan, adviser of Katarungan (an international human organization with members in DC metro area), also sent a statement to the TLHRC expressing “shock” over the EJKs, notably of drug addicts and dealers living in poverty, while those involved among the wealthy and the police are spared. The “killing spree,” Simbulan said, has also victimized journalists critical of the regime, social activists, church leaders and indigenous people defending their ancestral lands. 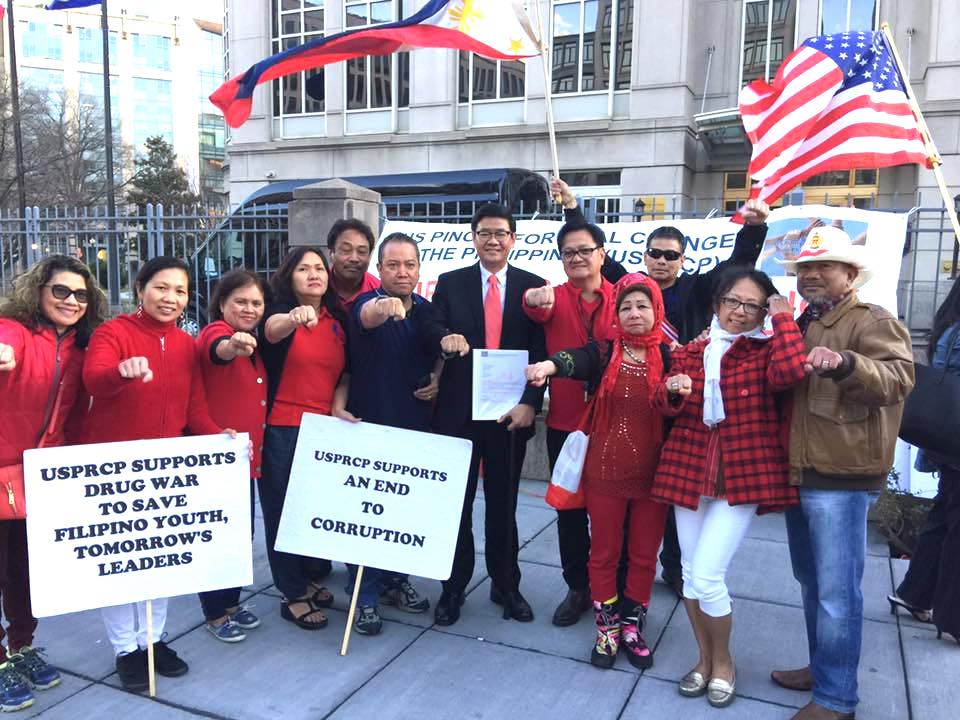 “There has been a lack of appropriate investigation, due process, prosecution and punishment in all these violations of human rights,” Simbulan states.

“Victims and their families do not get justice. We are troubled that the Duterte administration, like previous administrations, continues to use brute force as a way to deal with perceived threats to law and order.”

Meanwhile, Duterte’s popularity remain high. Human rights advocates like Carlos admit that resistance to Duterte, both here and in the Philippines, has not yet grown into a formidable force because the progressive movement, notably the left, is divided. Former anti-martial law activists, for instance, are now split between anti-Duterte and pro-Duterte supporters.

“Even people in the community, who are non-political, are singing Duterte praises,” observes former anti-Marcos activist Yvonne Reyes of Silver Spring, Maryland. “That’s because they like his no-nonsense brand of leadership and his simple lifestyle,” she adds.

Eric Lachica, executive director of US Pinoys for Good Governance (USPGG), is confident, however, that more congressional hearings on the Philippine human rights situation will increase greater awareness here in the US and louder opposition to Duterte’s policies. “We are working hard to get more sponsors for the Rubio/Cardin bill so the Foreign Relations Committee can start hearings on this issue,” he reports.