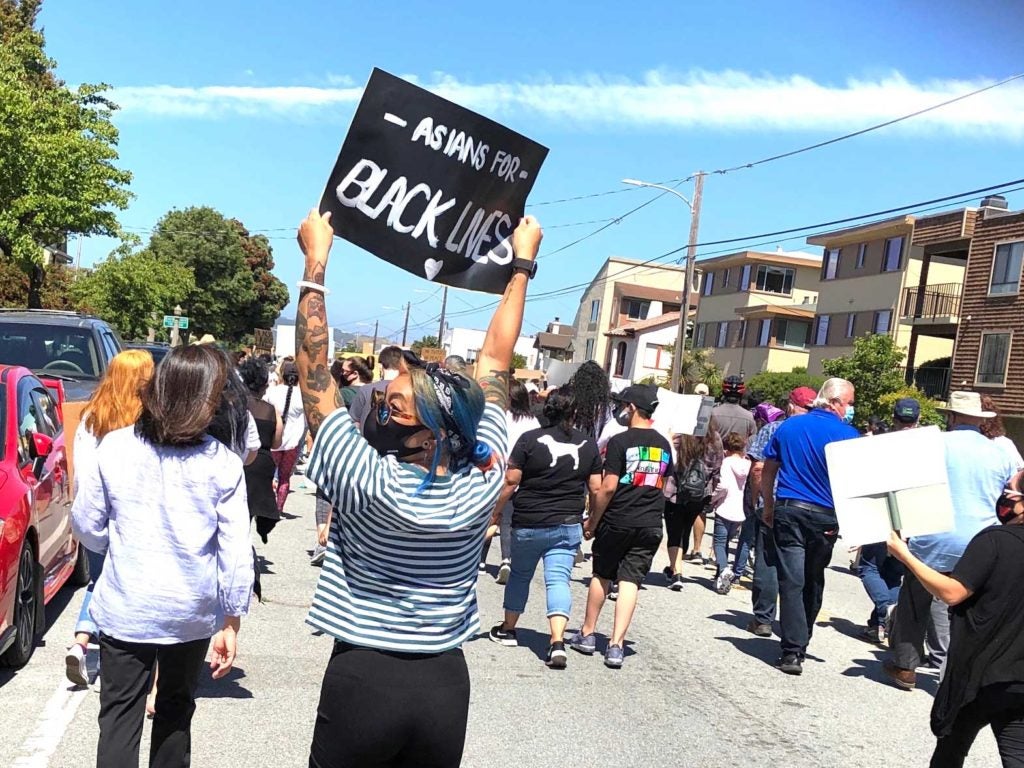 Marchers in South San Francisco protest against racism in the aftermath of the police killing of George Floyd. INQUIRER/C.M. Quero Moreno

SOUTH SAN FRANCISCO —  Filipino Americans who broke the racial barrier in South San Francisco politics walked the walk once again, this time at the June 4 rally against racism and police brutality here in their home city.

Mark Nagales and Flor Nicolas, the first Filipino Americans elected to the City Council of the fourth largest city in San Mateo County, showed up early with other officials before the 11 am start at the foot of City Hall on Grand Avenue.

From there they marched for about 2 miles down to Chestnut Avenue toward Arroyo Drive across El Camino Real to the Municipal Services Building, which also houses the South San Francisco Police Department. 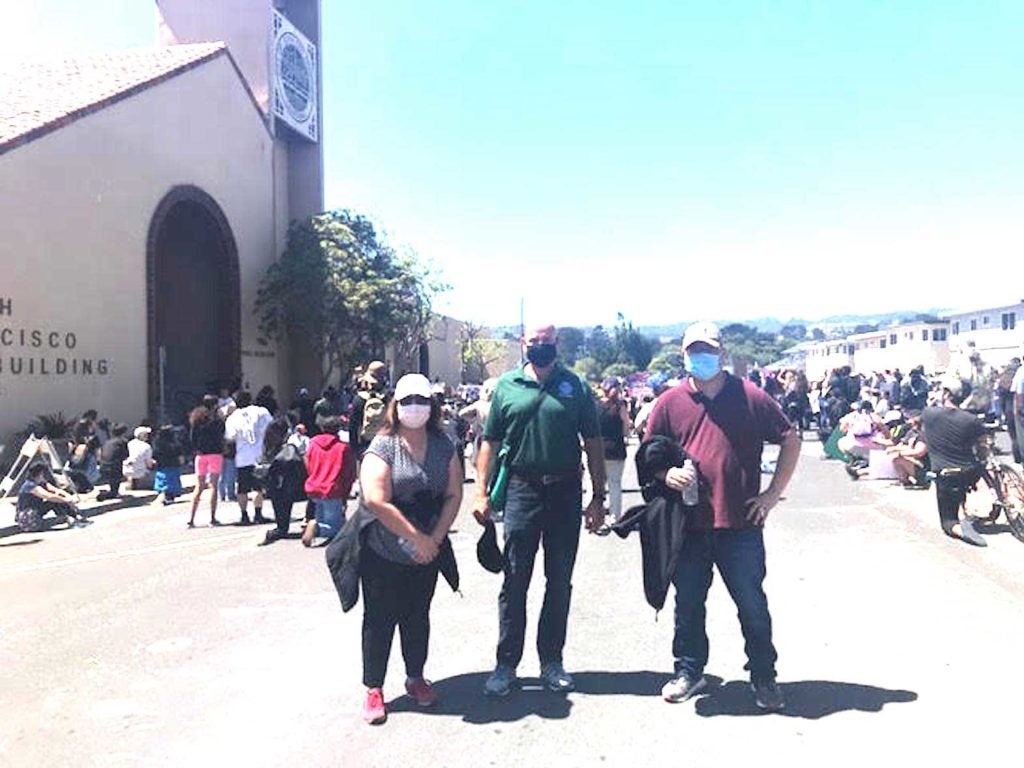 Both said they participated in and beyond the line of duty.

“I felt it was important as an elected official, resident of South San Francisco, and as father and husband to show that racism and discrimination have no place in our society,” Nagales told Inquirer.net.

“I am reaping the benefits of the Civil Rights movement that our African American brothers and sisters have fought for — equal rights,” stressed Nicolas, who attended with her husband, faith community leader Nenar Nicolas.

Nicolas expressed her support for the “young and articulate African Americans who are part of our community” in mourning George Floyd.  The 46-year-old Floyd died of cardiac-pulmonary arrest May 25 after a Minneapolis police officer knelt on his neck for over eight minutes while three other officers stood by. 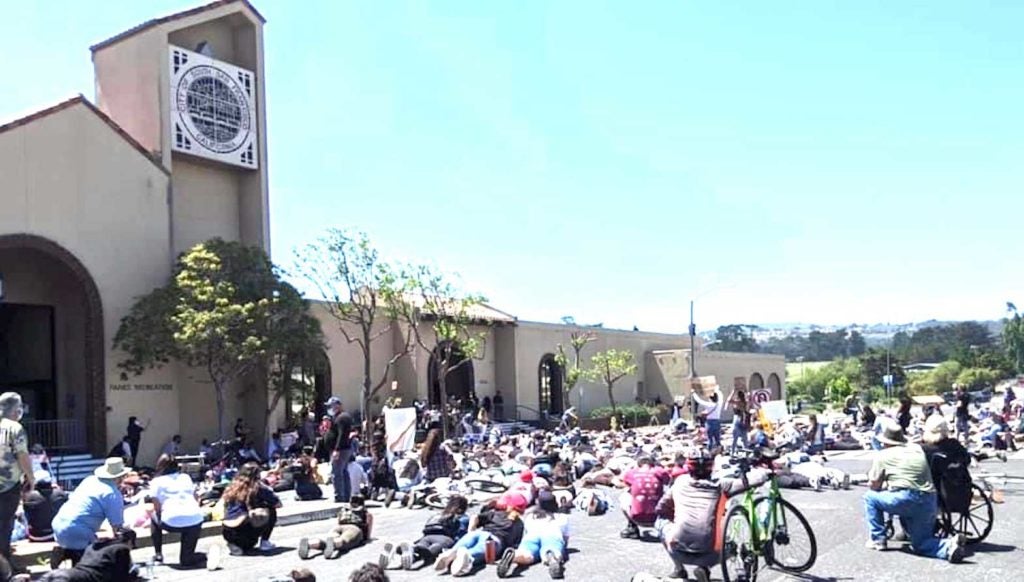 Silently, participants drop to their knees to honor George Floyd and others killed in racist attacks.   CONTRIBUTED

Flor Nicolas was a young mother when she last attended a protest rally 40 years ago after exiled Philippine Senator Ninoy Aquino was assassinated on his return flight home.  Floyd’s call-out to his mother as he gasped for breath is “seared” in her mind and broke her heart, Nicolas said, knowing how, like her, his mother “would have moved mountains” to free him from the fatal restraint.

An ideal response to the incident is to learn to “truly identify the structures that spread racism and oppression” to help break it, Nicolas said.

“I plan to support positive action that will benefit the community today and generations to come just like the peaceful protest. I will read, listen, and learn from those who have experienced these tragedies and lived with the pain of racism every day.”

Since settling down in South San Francisco in the late 1980s, Nicolas had been volunteering at church and community activities.  Her involvement impressed Karyl Matsumoto, the first woman and first Asian elected to the South San Francisco City Council, who eventually convinced the biotech executive to seek elected office and give Filipino Americans a voice.

Politically inclined since his days at South City High School, US-born Mark Nagales honed his political acumen during his longtime service as aide to his former teacher California State Assembly Member Gene Mullin and later as constituent services director in the office of US Congress Member Jackie Speier.

Current socio-political affairs have motivated him toward a new goal.

“The rally will give us an opportunity to have a more open and transparent conversation about race relations and how we can achieve racial equality,” he said.  “As an elected official, I want to lead in this important dialogue. My role right now is to listen and understand the feelings and concerns that people have. From this, I hope we can come up with real solutions and enact positive change.”

Victorious in their first individual campaigns in 2018, the two newest Council Members represent the largest racial group in South San Francisco, according the US Census.  Asians comprise 40%, topping whites who make up 35% and Latinos, who account for 34% of the 64,000 people living in South San Francisco as of April 2010.

In fact, three Asians and two Caucasians govern South San Francisco, which touts itself as the home of the biotech industry with 200 such companies sprawled on choice 12 million square feet by the San Francisco Bay.

Ironically, the highly charged discussion about race relations in the United States flooding the media these days tends to focus on the binary, leaving behind other communities of color. 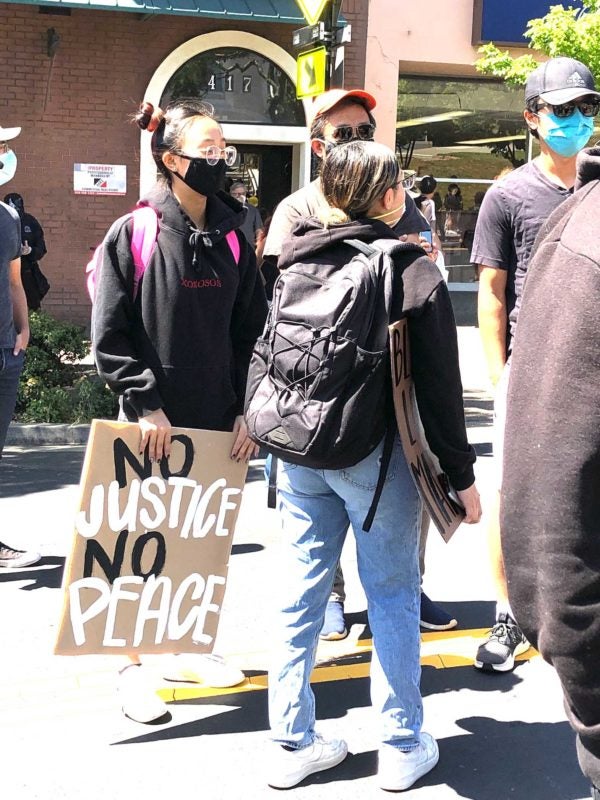 Families of color warm up for the 2-mile walk. INQUIRER/C.M. Querol Moreno

Filipino Americans are among those who fade out in commentaries zeroing in on black-white dynamics despite having been part of the American tapestry for centuries.  Some say the omission could be blamed on the lack of Filipino engagement. Others chide supposed experts’ shortsightedness and insufficient research for the invisibility of Filipinos in the news media.  Filipinos, after all, have not been uneventfully watching the world pass them by.

In the 1950s Filipinos initiated the movement to unionize California farm workers.  In the 1970s they fueled the Third World Liberation Front Strikes that created Ethnic Studies and diversified courses first in San Francisco State University and then the rest of the country’s schools.  In alliance with other marginalized people of color and white supporters.

From farm worker Fermin Tobera, who was shot dead by white men targeting Filipinos during the 1930 Watsonville riots, to USPS worker Joseph Ileto, who was shot point blank in 1999 by an avowed white supremacist in Chatsworth, California, Filipinos have died in the name of race hatred.

Last week’s demonstration exhibited a meeting of minds and hearts when the racial spectrum manifested itself throughout its three hours.  Flyers had reminded prospective attendees to observe safety precautions including wearing masks and social distancing, and most complied.

About an hour before 11 a.m., police officers started setting up barricades to enclose the  staging area before gathering under tree on the grounds of City Hall.  They waved back at participants who unexpectedly greeted them along the way.

SSFPD Chief Jeffrey Azzopardi on June 2 had issued a statement to “fully support peaceful protesting and those that wish to express their voices and feelings in a peaceful and lawful manner” with the warning that law enforcement “will not tolerate violence, property destruction, and criminal behavior.”

“The misconduct by the police officers in Minneapolis does not reflect the professionalism and high expectations of our officers here,” said Azzopardi, who attended the rally.

Nagales echoed the police credo to serve and protect as well as to prevent escalation of violence, which the Floyd case proved to happen in a matter of minutes, triggering mass unrest that exploded in riots in some cities.

“When that trust is broken because we see police brutality, we must all stand up and denounce it through action,” he said, reiterating his recommendation.  “I plan to have an open conversation with the community about possible steps to ensure that never happens here.”

“It is important to recruit new officers and staff with diversity in mind — we have a large Hispanic community and our public safety officers reflect that.  We are already doing another review of our training and recruitment programs for police officers to ensure that we deliver public safety in the best way possible.” 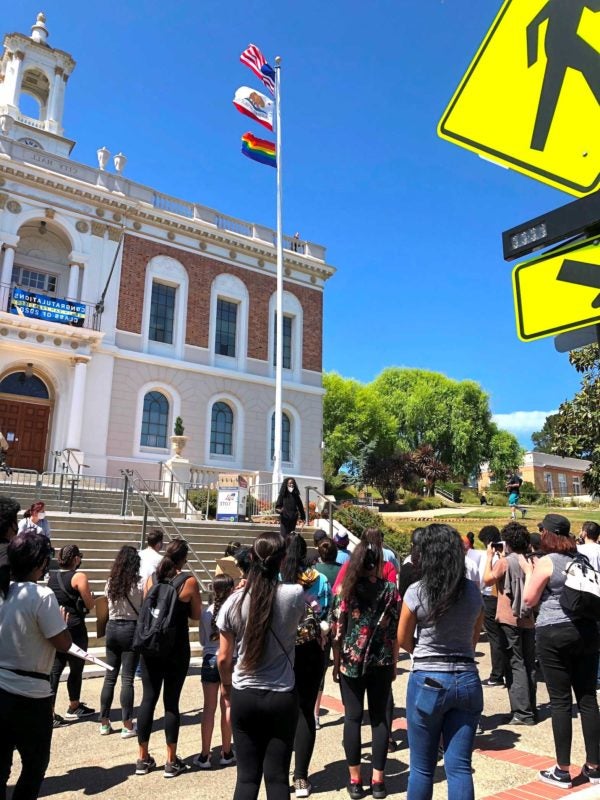 Some 300 people of color and none gather peacefully at the foot of City Hall. INQUIRER/C.M. Querol Moreno

Billed as a “Peaceful Protest” by organizers dubbed Rise in Power#Justicefor GeorgeFloyd #BLACKLIVESMATTER #DoSomething, the gathering lived up to its name from start to end, where the entire assembly dropped to its knees to honor George Floyd.

“We stand with our county, state, and nation in grieving the recent tragic killing,” Futrell and Mayor Richard Garbarino said in a joint statement posted June 3 on the city website.  “Civic engagement should be encouraged, and from that engagement will come more informed decisions and ultimately a better community.”

At the conclusion of the rally a group of protesters tried to drown out the mayor’s remarks but were admonished immediately by organizers to show respect.

Shops along the way had rushed to board up their property in the event of a riot that did not happen.  Instead, the boards provided a canvas for protesters to express their sentiments artfully, peacefully.