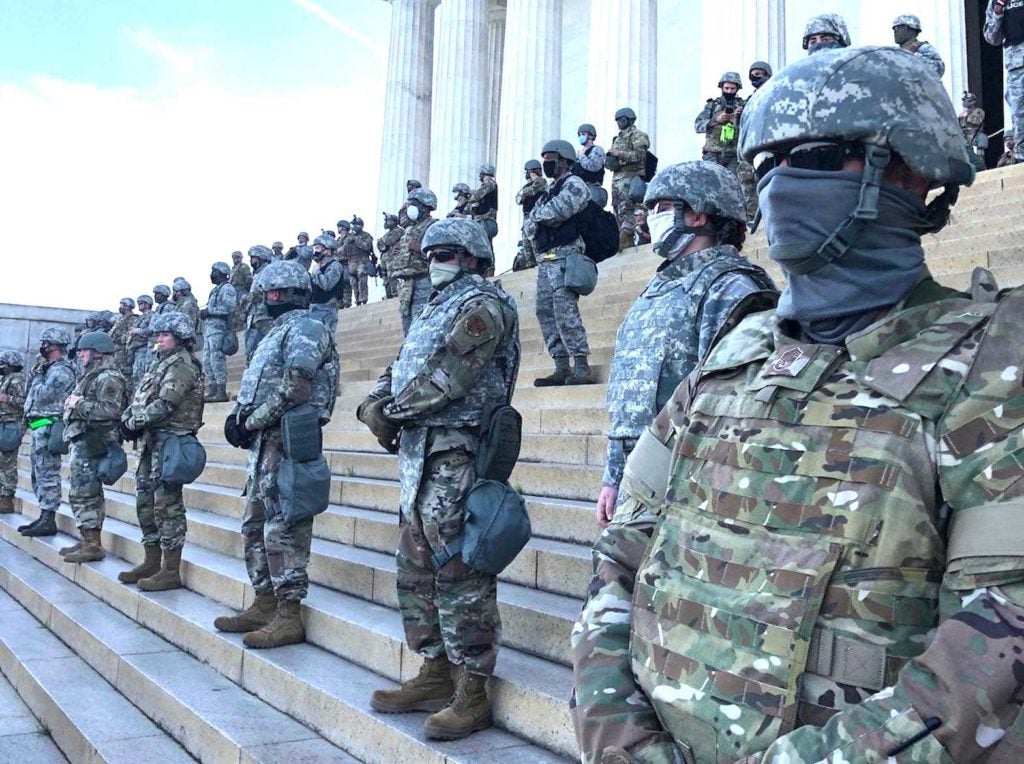 National Guardsmen on the steps of the Lincoln Memorial in Washington, D.C., on June 2, 2020. (Twitter/Martha Raddatz)

In Trump terms,  it’s apprentice  governance in real time, more like a  reality show I call , “My, How Our Democracies Have Evolved, Little Brown Brother.”

Trump and Duterte are  battling neck and neck–especially in these COVID times. Trump is a “no mask, don’t ask” guy.  Mask? And hide a mug only Melania could love?

At a meeting this week, I didn’t see Duterte mask up either, even when aides wore  masks and face shields.  It’s a tie, even if Trump takes hydroxychloroquine too.  Turns out a study by the University of Minnesota has declared it no better than a placebo. Fitting for a placebo president.

But Duterte still pulls away as a man who never met an extrajudicial killing he didn’t like. All Trump can claim is jailing a few border crossing children.

Hundreds of protesters had gathered peacefully to express their rage in the killing of an unarmed black man, George Floyd, who died when a white police officer in Minneapolis took a knee on his neck.

Then Trump stepped up his game. He trucked in active military troops to the White House, which may in his mind make up for not calling it a “palace.” He had law enforcement sweep the crowd, hurling tear-inducing  pepper spray and smoke bombs, forcing the crowd to retreat. They were all mostly innocent people expressing their right to free speech and assembly.

That’s when Trump unabashedly took the lead. He is putting the authoritarian into USA, then reinforced it all with more troops and even unidentified police. Secret Police? Like Iran?

Trump, who has long had an Asian dictator fetish, was overtaking Duterte and now solidly vying to lap the man he professed love for, North Korean leader Kim Jong Un. By threatening to invoke the 1807 Insurrection act, Trump seemed to be aping his Chinese counterparts who recently put a lid on Hong Kong, and who 31 years ago butchered the innocent in Beijing’s Tiananmen Square

How silly to have feared a  Constitutional crisis. There is a democracy crisis in America like never before.

And to think, all  we really wanted from the  president were simple calm words of empathy. You know “we’re one nation” talk.

But all we got Trump is acting like the second coming of Marcos.

It could have been you

I first started crying earlier in the week. And it wasn’t from tear gas.  I was watching cable news. Just like the president.

On my screen, a young Asian American woman, blonde streaks in her hair, desperately helps her distressed Asian American male companion. He’s squinting in anguish as if mocking Mickey Rooney in “Breakfast at Tiffany’s.”

But it’s no joke as the woman douses his bawling eyes, then takes the water bottle to flush her own, all before bending over, her mouth open gasping for air.

None of us can breathe easy anymore in this America.

As I am socially distanced in California, I saw them both as my proxies, all of us outraged by the killing of  Floyd in Minneapolis.

The two tear-gassed Asian Americans were among the victims of our insecure, narcissistic leader, who reports say was so  upset as being seen as retreating to a bunker during the weekend of riots when a part of the nearby St. John’s Church burned down.

Trump needed a photo op. “It was just to win the news cycle,” said a Trump advisor to the Washington Post.

It may have done more than that. After all, the president has done in his tenure from travel bans, to border wall politics,  to saying he’s not taking responsibility for pandemic delays that have resulted in tens of thousands more deaths than necessary, the gassing of the innocents at Lafayette Park on Trumpian whimsy may be the unforgettable act that dooms his presidency.

Or just add it to the list of ignominious Trump actions. It will be a long list.

I was actually working on another piece on the cruel and vicious ways alpacas are treated when shorn for their wool. Normally docile, alpacas react by screaming, crying, and vomiting.

Sort of like protesters when gassed. That’s how I saw what happened as police with shields physically swept through the peaceful crowd. And all because the president wanted that path cleared for his photo op.

TV was the only way to appreciate yet another Orwellian moment of the Trump administration. As cameras were fixed on the Rose Garden for a Trump statement, you could hear the flash-bang grenades and the commotion of the police harassing the protesters a few blocks away.

Then the president appeared. In split screen, as the peaceful protestors were attacked, the president declared himself our “law and order president,” a flashback to Nixon, who used it to repel the stink of Watergate.

In his statement, Trump claimed to be for justice for George Floyd and his family, but couldn’t take the time to distinguish between violent instigators and looters and peaceful protesters.

Looters are unfortunate opportunists. Not political players. They’ve lived under the thumb of white supremacy. They feel entitled to free stuff. But it’s against the law.

More to the point, they’re  not the majority of people involved in more than a week of protest. But Trump held firm: “We cannot allow the righteous cries and peaceful protesters to be drowned out by an angry mob.”

But perhaps an angry insecure politician can drown them all out indiscriminately as the president did on Monday. With a broad brush, he seemed to call it all an “act of domestic terror.”

“That is why I am taking immediate presidential action to stop the violence and restore security and safety in America,” the president said. “I am mobilizing all available federal resources civilian and military to stop the rioting and looting to end the destruction and arson and to protect the rights of law abiding Americans, including your Second Amendment rights. Therefore, the following measures are going into effect immediately. First, we are ending the riots and lawlessness that has spread throughout our country. We will end it now.”

The president said he’d deploy the U.S. military to states and cities. Under a 1807 law, he can do so. But not if the courts and Congress have a say.

And note the wink to gun nuts by mentioning the Second Amendment, essentially giving the OK to MAGA vigilantes everywhere to protect America on their own. You mean like the guys who killed Ahmaud Arbery?

When the statement was done, the photo op continued.

First, a stroll from the Rose Garden to Lafayette Park. Led by his main enabler, Attorney General William Barr, from a reporter’s eye view it could have been the Trump version of a perp walk.

The path clear of protestors, Trump went directly to St. John’s and held up a prop, a Bible, as if the book means something to him. It was just a symbol signifying his love of Christian voters.  But it should be taken as a sacrilege by any God-fearing Filipino.

And then he called his aides–all white–to stand by him for another picture that glaringly revealed why Trump is out of synch with his own country.

After last week, all we wanted was calm reassurance that our nation and our democracy would be safe. And that the travesty of the Floyd death was not going to unravel us. We wanted to hear from a leader.

Instead, the president once again was unable to show adequate comfort, care, or empathy for all the people. He used the moment not to bring the country together, but to hasten the unraveling of the country. He used us. Our anger. Our rage. He turned it conveniently into his “law and order” playbook to victory.

There’s no doubt the protests have brought quick change in the Floyd case. All four officers in Minneapolis have now been arrested. And the base charges have  been upped to second-degree murder.

But it’s s going to take all of us to condemn what’s really happening. He’s made us forget the pandemic for now. Don’t let him make us forget our democracy.

If not, the president seems to be preparing for an anarchy he’s sowing. That will make it a long hot summer of tear gas and rubber bullets, as he looks to extend a clearly abusive and immoral presidency.

Emil Guillermo is a journalist and commentator. He writes a column for the North American bureau of Inquirer.net. Twitter @emilamok. Listen to his “Emil Amok’s Takeout” on amok.com.