Ariel Alacaba celebrating Christmas at his workplace, a care home for the elderly. CONTRIBUTED

“I miss Paskong Pinoy. I know time will come when we will celebrate it with my grandson,” says Ariel Alacaba, excitement in his voice. He shows off the photos of Axl, his grandson, the first-born of his eldest, Bryle.

In a homecare facility in Texas, Ariel set up a Christmas tree in November to the delight of four elderly persons in his care. (The name of the facility and the residents are withheld upon request.) This is not the first time Ariel has experienced Christmas away from home.

On December 31, 2003, a few hours before New Year, Ariel boarded the plane bound for Nassau, the Bahamas, to work as a teacher. Armed with hopes and dreams for his family, he braved his way to the airplane blocking the faces of his wife and young children. Bryle was 12 and Pzyra was 5.

Thirteen years after, he still feels lonely during Christmas; but has to endure this for many years until such time he could petition his family. This is his second winter in the United States. Only the memories of Christmas pasts, Skype calls and messages of his family in the Philippines keep his spirits high.

Like many OFWs and immigrants, Ariel keeps in mind that Christmas will pass but not the needs of the families back home. His last vacation in the Philippines was in 2012. 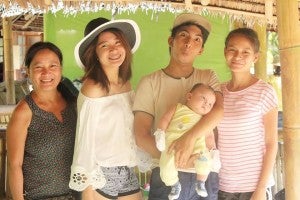 Easing poverty has been the Philippines’ top priority for decades, yet it still persists, and working abroad has become a commonplace for Filipinos. Braving loneliness and maltreatment are just a few of the OFWs’ challenges. On the positive side, family members migrating for work does uplift the lives of many families back home.

“We somehow get used to it or are trying to get used to it. Like me, they (the homecare residents) will spend Christmas here. They are my family here,” Ariel says.

From teacher to caregiver

Ariel spent 10 years in the Bahamas as a government teacher. All was well at first, but after three contracts, he was put on a per month basis, which delayed his salary. In the Bahamas, a foreign worker is limited to three consecutive contracts or nine years. Besides, Ariel could not petition his family, so he applied as a mathematics teacher in the United States. He arrived in US April 2015.

Upon arrival, Ariel took the examination for teachers and obtained a license to teach anywhere in the United States. But he found out that the agency that hired him would only give two years non-renewable contract, and he would have to pay 35 percent of his gross income.

“I gave it up. I thought of coming home, but my youngest daughter was already in the university. I could not give up my dreams for my family just like that. I still have other cards in my hand,” Ariel explains.

Unlike other migrant workers who are not qualified or licensed to do other jobs, Ariel prepared himself for other occupations. Before he decided to become an OFW, he trained in care giving. He has been a certified caregiver since 2002.

He says that trainings or courses in skilled-based occupations are important aside from university/college degrees. The government issues certifications and accreditations to qualified skilled workers.

After a few weeks of job-hunting, Ariel found a care giving facility. Although he was not sure if he could stay for long, he decided to give it a shot. He has stayed.

Ariel is stay-in caregiver. He is on call 24 hours except on his day-off. The facility is a bungalow designed like a residential home. The four elderly persons he is taking care of are not senile, so he can communicate with them clearly.

He says that taking care of the elderly gives him satisfaction because he was not able to take care of his parents. He does not consider it as merely a work, but a passion and commitment.

“Surprisingly, I don’t miss teaching. Teachers in the US are paid well compared with caregivers. But I found satisfaction here,” Ariel muses.

He once dreamed of becoming a nurse or a doctor, but his family could not afford to send him to Manila to study. Being a caregiver is the closest thing to the realization of his dream.

“I am like a nurse here. I check the vitals, take the level of blood sugar or inject insulin if needed. I report to their doctors and inform their families about their health and concerns. I entertain them,” he says. 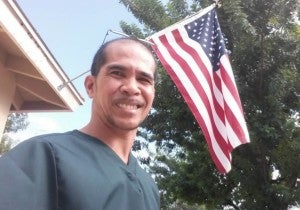 One of the most dreaded part of being a caregiver is when an elderly dies, especially if the caregiver has treated the person as family. Ariel explains that the families of those committed in the facility also expect news of the demise of their loved ones at any time.

“My first ward died during my first few months here. I gave her a bath, combed her hair and put her to bed. After a few hours, I realized she was not breathing. I called 911, the family and the doctor. I cried too,” Ariel recalls.

A message makes a difference

Ariel will not be home for Christmas for the next five years. Upon getting an immigrant status, he will apply for citizenship and petition his family.

To ease homesickness, Ariel engages in therapeutic massage, hair cutting and cooking Filipino dishes. He sometimes goes out with other Filipinos who are also dreaming of better lives for their families.

There is a vibrating sound. Ariel takes out his phone from his thick jacket. There is a photo message from his daughter, Pzyra: Axl could turnover. Ariel smiles longingly. He puts the phone on his chest, hugging his growing family in his mind.

“One message makes a difference to a migrant parent. Make sure not to stop communicating with family back home. Take advantage of the Internet and social media. Despite missing the important milestones in my kids’ life, they understand. I am here because of them,” Ariel says.