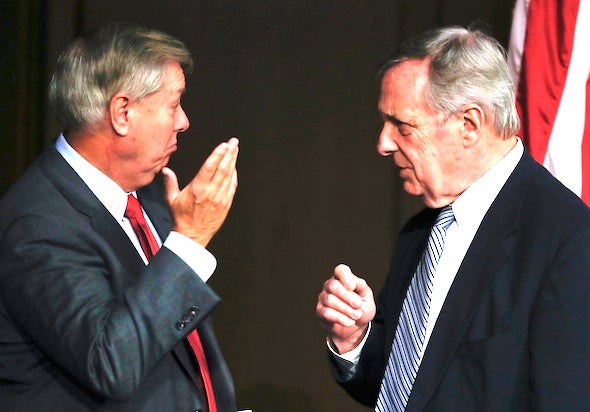 WASHINGTON, DC — Two senators introduced a bipartisan bill to give undocumented immigrants brought to the U.S. as children, commonly referred to as “DREAMers,” a chance to become permanent residents as a pathway to becoming US citizens.

The bill’s sponsors Sens. Lindsey Graham (R-South Carolina) and Dick Durbin, D-Illinois) told reporters July 20 they didn’t believe that young people should be held responsible for the errors or the illegal actions of their parents.

The bipartisan legislation applies to DREAMers (or Dream Act or DACA-eligible undocumented immigrants) who were brought to the U.S. as children and have been residents in the country for a long time, graduated from high school or obtained a GED and passed a series of background checks.

The immigrants will be required to work toward a college degree, serve in the military or be lawfully employed for at least three years. Anyone who has committed a felony or poses a threat to the U.S. is not included.

Graham pleaded with the Republican Party and President Donald Trump to protect the more than one million immigrants who were brought to the U.S. as children.

Durbin acknowledged that the legislation proposed Thursday, July 20 is very similar to the past Dream Act bills as well as an executive order by the Obama administration, which risks elimination by President Trump.