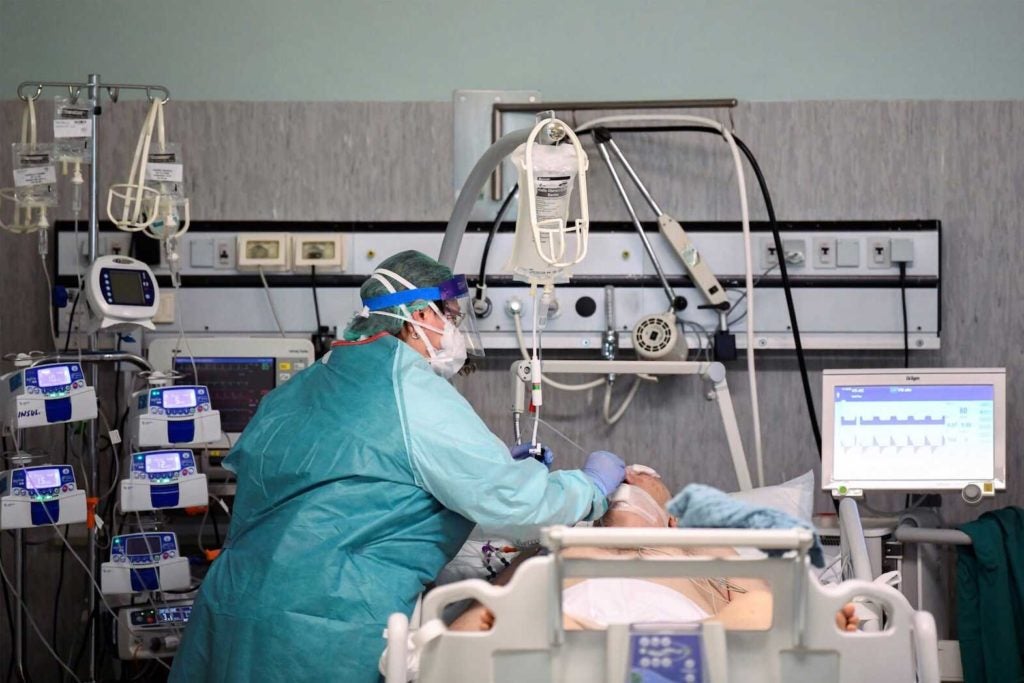 A medical worker treats a COVID-19 patient in an intensive care unit in Italy. Across the globe, health care providers are using ventilators to treat COVID-19 patients. Filipino nurses are among them. (Flavio Lo Scalzo/Reuters)

Gem Scorp could be the name of an American superhero. In fact, he is.

He’s a Filipino American nurse on the front lines of the pandemic. He works 7 days a week trying to save lives at a New York city hospital in ground zero. Then when it’s over, he risks being threatened by angry people who see him on the subway and say, “Go Back to China.” When he gets home, he immediately isolates himself from his wife and kids he cannot touch, hug or kiss.

“I feel so alone,” Scorp told me over the weekend. “It’s very sad emotionally…I miss my family.”

Such is the life from the front.

“It’s not easy,” Scorp said. “The life of being a nurse right now is like we’re floating in the air. I don’t know what’s going to happen next.”

Scorp will talk about how Filipinos are affected by Covid-19 in a virtual conference on Wednesday, April 15, at 3pm EST/12 noon Pacific. Register free: bit.ly/covidaffectsusfilipinos

When I talked to him, he was quick to say, things are better today compared to the beginning about five weeks ago. These days, he said he only hears the “Code Blue” emergency  only 6 time a shift, not 10 times or more as before.  He even uses the word “peace” to describe how it feels relative to the early days, a sign that distancing efforts and hand washing are working.

It’s consistent with the reports that say hospitals are coping better, though deaths are still rising in New York City.

Scorp says at the beginning everyone was caught off guard.

“When this really happened, we are overwhelmed because we were not really prepared,” he told me.

For the first time in his 18 year nursing career, Scorp said that no one would know what’s going on with a patient and they would just die. He said that as they intubated patients they usually get time to diagnose the known symptoms of COVID-19, especially lung issues like  shortness of breath. But he said strange symptoms like abdominal pain would show up. “It’s bizarre,” he told me. “They cannot track the right protocol to treat the patient.”

It’s what happens  with a fast moving situation where the virus is mutating looking for a host, and the good guys don’t know enough to fight back when there’s no known cure nor vaccine.

Scorp does what he can. He vents patients and tries to comfort them to health. He’s had chronic patients in the past who’ve vented for two years and they survive. But this time they just die.

“I’ve never seen death like this before,” he told me.

The opposite of intubating a patient (attaching a patient by tube to a ventilator) is extubation, the removal of the tube, a sign the patent is surviving.

One place Scorp works did just one extubation since the beginning of the pandemic. One. Out of hundreds of patients coming in.

Scorp says another hospital is seeing 1.5 deaths per hour.

“I’m happy that I’m able to help people,” he said. “But right now, it lowers my self-esteem. I feel hopeless.”

Fortunately, Scorp feels Filipino. And that has made a big difference at work where at one hospital, he said more than 80 percent of the nurses are Filipino. When things get dire, he turns to his kababayan.

“We find ways to laugh to make things lighter,” he told me.

I’ve written about one’s “Filipinoness” for years. In Scorp’s case, he believes it has helped him cope.

“I believe so,” he told me. “I’m happy that I’m Filipino. I don’t take things very seriously. I focus on my job and my skills, but emotionally, being Filipino helps me fight this one (the virus). If I am not Filipino I am losing my mind with all the craziness going on.”

Scorp said  these days with the help of the union and the forced social distancing, he is seeing things calm down quite a bit. On a scale of 1-10, ten being normal, he said things  at the hospital, a 2 at the beginning, now are more like a 7.

We still have a ways to go before we can talk about normal. But Scorp knows the virus can be beaten. He had a touch of it early.

“I had fever the first three days, fever chills,” Scorp told me. “My hospital didn’t take it seriously. We were careless.”

The workplace also sent all the workers a memo to “work until critically ill,” Scorp said. “We had no choice.”

To keep working, Scorp  used over the counter medicines and his  good old fashioned herbalist sensibilities. Garlic and onion have natural anti-inflammatory qualities. Bitter melon. He did research and worked his way back to where he says now he feels back to normal. He may have also built up some antibodies, so there’s no proof that any of it really works.

And then there’s faith.

That Easter was disrupted by the virus isn’t lost on many a Filipino. The Crucifixions of Pampanga canceled!

Scorp, like many Filipinos is strong in his faith. It’s aided him at work.

“Only God can help,” he said. “No science, no medicine, not vaccine, so it’s faith that is holding us together. And I am happy we can feel that Filipino spirit in prayer.”

It’s the perspective of a Filipino American hero who says “God is bigger than the virus,” fighting the pandemic as a nurse.

Scorp, who immigrated in 2006, is just the latest example of the generations of nurses who have come to America since the 1960s.

As we shelter in place, let’s remember all of them. The fighting Filipino nurses of COVID-19.

Emil Guillermo is a journalist and commentator. He writes a column for the Inquirer.net.

[email protected] Find him on Apple Podcasts. Listen to his interview with Scorp on  “Emil Amok’s Takeout.”