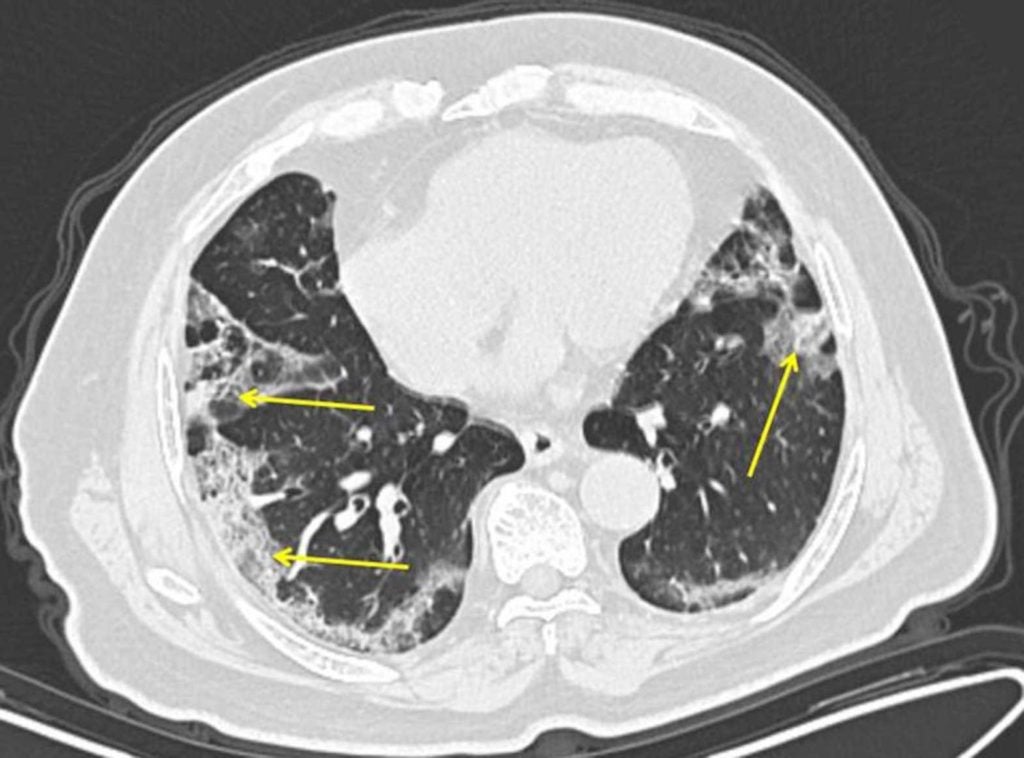 This undated image provided by Mount Sinai Hospital in March 2020 shows a CT scan from a 65-year-old man in China with COVID-19. Pneumonia caused by the new coronavirus can show up as distinctive hazy patches on the outer edges of the lungs, indicated by arrows. (Mount Sinai Hospital/AP)

Reports of recovery from serious illness caused by the coronavirus have been trickling in from around the world.

Physicians are swapping anecdotes on social media: a 38-year-old man who went home after three weeks at the Cleveland Clinic, including 10 days in intensive care. A 93-year-old woman in New Orleans whose breathing tube was removed, successfully, after three days. A patient at Massachusetts General Hospital who was taken off a ventilator after five days and was doing well.

“Patients are definitely recovering from Covid-19 ARDS [acute respiratory distress syndrome] and coming off vents,” Dr. Theodore “Jack” Iwashyna, a professor of pulmonary and critical care medicine at the University of Michigan, wrote on Twitter recently.

But the outlook for older adults, who account for a disproportionate share of critically ill COVID-19 patients, is not encouraging. Advanced age is associated with significantly worse outcomes for older patients, and even those who survive are unlikely to return to their previous level of functioning.

According to a new study in The Lancet based on data from China, the overall death rate for people diagnosed with coronavirus is 1.4%. But that rises to 4% for those in their 60s, 8.6% for people in their 70s and 13.4% for those age 80 and older.

How often do people who are critically ill recover? According to a report from Britain out last week, of 775 patients with COVID-19 admitted to critical care, 79 died, 86 survived and were discharged to another location, and 609 were still being treated in critical care, with uncertain futures. Experts note this is preliminary data, before a surge of patients expected over the next several weeks.

According to a just-published small study of 24 critically ill COVID-19 patients treated in Seattle hospitals, 50% died within 18 days. (Four of the 12 who died had a do-not-resuscitate order in place.) Of those who survived, three remained on ventilators in intensive care units, four left the ICU but stayed in the hospital, and five were discharged home. The study appeared in the New England Journal of Medicine.

What does recovery from COVID-19 look like? I asked Dr. Kenneth Lyn-Kew, an associate professor of pulmonology and critical care medicine at National Jewish Health in Denver, named the No.1 respiratory hospital in the nation last year by U.S. News & World Report. Our conversation has been edited for length and clarity.

It’s helpful to think about mild, moderate and severe disease. Most people, upwards of 80%, will have mild symptoms. Their recovery typically takes a couple of weeks. They might feel horrible, profoundly fatigued, with muscle aches, a bad cough, a fever and chest discomfort. Then, that goes away. Also, there are some people who never have symptoms, who never even know they had it.

Q: What about people with moderate illness?

Because we’re so early into this, we have less information about these patients. Often, they spend a few days in the hospital. People feel more short of breath: Sometimes, an underlying condition like asthma is exacerbated. Typically, they need a bit of oxygen for a few days.

Also, there are patients who have high fevers or severe diarrheal illness with COVID-19. Those patients can get dehydrated and need IV fluids.

There also appears to be a small population of people who can develop myocarditis ― inflammation of the heart. They come in with symptoms that mimic heart attacks.

Q: How long do these patients stay hospitalized?

It can vary. Some people get a little oxygen and IV fluid and leave the hospital after two to three days. Some of these moderate patients start to look a little better, then all of a sudden get a lot worse and decompensate.

Q: What about patients with serious illness?

Many of the sickest patients have acute respiratory distress syndrome [ARDS, a disease that floods the lungs with fluid and deprives people of oxygen]. These are the patients who end up on mechanical ventilators.

Those least likely to recover seem to be frail older patients with other preexisting illnesses such as COPD [chronic obstructive pulmonary disease] or heart disease. But there’s no guarantee that a young person who gets ARDS will recover.

ARDS mortality is usually between 30% and 40%. But if you break that down, people who have ARDS due to trauma — for instance, car accidents ― tend to have lower death rates than people who have ARDS due to infection. For older people, who tend to have more infections, mortality rates are much higher — up to 60%. But this isn’t COVID-specific data. We still have a lot to learn about that.

Q: If someone is sick enough to need ventilation, what’s involved?

People usually need a couple of weeks of mechanical ventilation.

Ventilation is very uncomfortable for many people and they end up on medication to make them more comfortable. For some people, just a bit of medication is enough.

Other people require heavier doses of medications such as narcotics, propofol, benzodiazepines or Precedex [a sedative]. Because they act on your brain, these medications can induce delirium [a sudden, serious alteration in thinking and awareness]. We really try to minimize that because delirium has a significant impact on a person’s recovery.

Being on more medication affects other things also: a patient’s sleep-wake cycle. Their mobility, which can make them weaker. It can slow down their gastrointestinal tract so they don’t tolerate nutrition as well and get suboptimal nutrition. Many of these patients end up having PTSD [post-traumatic stress disorder] and impaired concentration afterwards.

Q: When can someone go off a respirator?

There are three criteria. They have to be awake enough to protect their swallowing mechanism and their airway. They have to have a low enough need for oxygen that I can support that with something else, such as nasal prongs. And they have to be able to clear enough carbon dioxide.

Q: What will a patient look like at the end of those two weeks?

That depends. If we’re able to do everything right, these people are up and walking around with the ventilator. Those patients come out on the other end looking pretty good. Maybe they’ll have some weakness, some weight loss, a little PTSD.

The patients who are sicker and more intolerant of the technology, they tend to come out weak, forgetful, confused, deconditioned, maybe not even able to get out of bed. Sometimes, in spite of our best efforts, they’ll have skin wounds.

Some of these patients have significant lung fibrosis ― scarring of the lungs and reduced lung function. This might be a short-term part of their recovery or it could be long-term.

Q: Are there special considerations for older adults?

Older adults tend to have more preexisting illnesses that put them at more risk for complications. Their immune system is less robust. They’re more prone to secondary infections such as pneumonia in spite of everything we do to prevent that.

Frailty is an important factor as well. If you come in frail and weak, you have less reserve to fight this through.

Q: When are people ready to be discharged?

You can go home on supplemental oxygen if you still need that kind of assistance. But you need to be able to feed yourself and move around or, if you have more disability, have someone to provide that for you.

Some people spend a couple of weeks in the ICU, then two to three days on a medical/surgical ward. Other people take another week or two to regain some strength. Some will go to an acute rehabilitation facility to get rehab three times a day. Others can go to a skilled nursing facility, where they’ll get rehab over a couple of months and then go home.

That we just don’t know yet. When we sit down after all this and look at everything afterwards, we can pull up those patterns.

In the ideal world, I wish I could predict who would do well and who wouldn’t, so I could talk to them and their family and have an honest conversation.

Q: Are other factors complicating recovery?

With such a high number of sick people, it’s harder to do things to maximize recovery, such as bringing in physical therapy and occupational therapy. People aren’t able to get as much therapy because there are only so many therapists and some hospitals are limiting who can come in.

COVID-19 is really a nasty disease because of its infectiousness. It isolates people from a lot of things they need to get better — perhaps, most importantly, their family, whose support is really critical along with all the other things I’ve talked about here.