Whenever I hear Duterte is popular, I remember this picture

Whenever I hear Duterte is popular, I remember this picture 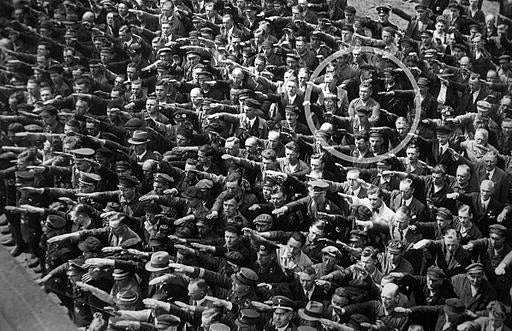 August Landmesser, in the circle, in this 1936 photo of a Nazi rally. WIKIMEDIA

Thousands of Filipinos, most of them poor, are slaughtered or executed without due process in a reckless, cynical campaign. A disastrous war is being waged by an increasingly arrogant government.

It’s a painful reality for Filipinos horrified and outraged by the Duterte bloodbath, who care deeply about the future of the country.

But then we just have to remember: Yes, Duterte is popular. But so was Ferdinand Marcos. And so was Adolf Hitler.

It’s not at all unthinkable: A fascist leader with mass appeal. At least, until that fascist ruler is eventually exposed, and his people rise up after saying, “Enough.”

It takes time. And it entails many acts of sacrifice and courage. We learned this during the 14 years of dictatorship under Marcos, the president Duterte idolizes.

Sometimes, these acts of sacrifice and courage are carried out by individuals, acting alone.

In fact, whenever I hear that Duterte is popular, I remember the photo above.

Taken in 1936, it shows a crowd giving the infamous “sieg heil” salute during a pro-Naza rally in Germany. Hitler was at the height of his popularity and power.

The photo became famous because of one person who seemed out of place, even lost in the scene, a man who defiantly, courageously, insanely, refused to give the Nazi salute.

His name was August Landmesser. He had actually been member of the Nazi Party, according to a story in the Christian Science Monitor. But Landmesser fell in love with and married a Jewish woman, Irma Eckler, in 1935. They had a daughter.

It was a defiant act at a time when Jews were increasingly being persecuted and ostracized by the Nazis. Eventually, the Nazis murdered six million of them.

It’s a crime that Duterte has actually invoked as president — even though his grasp of the tragedy is flawed and he cited the cataclysm for a twisted reason.

Just three months after taking power, Duterte invoked the Holocaust to explain the bloodbath he just unleashed, although he grossly undercounted the dead. “Hitler massacred 3 million Jews. Now, there are 3 million drug addicts … I’d be happy to slaughter them,” he said.

Back in Germany in the 1930s, Landmesser and Eckler paid a heavy price for falling in love and marrying. He was expelled from the Nazi Party. She was detained by the Gestapo, the Nazi secret police, and then sent to a concentration camp where she died. Landmesser was also arrested. After his release from prison, he was drafted into the German army and was declared missing.

Their daughter, Irene, survived the war. She helped identify his father in the photograph when it was published by the German newspaper, Die Zeitth, in 1991. Ten years later, the photo went viral after it was posted on the Facebook page created to help victims of the earthquake and tsunami in Japan.

The caption on the Facebook page says: “Ordinary people. The courage to say no.”

Every time I hear people say Duterte is popular, I remember him, August Landmesser, famous on the Internet as the man who refused to give a Nazi salute.