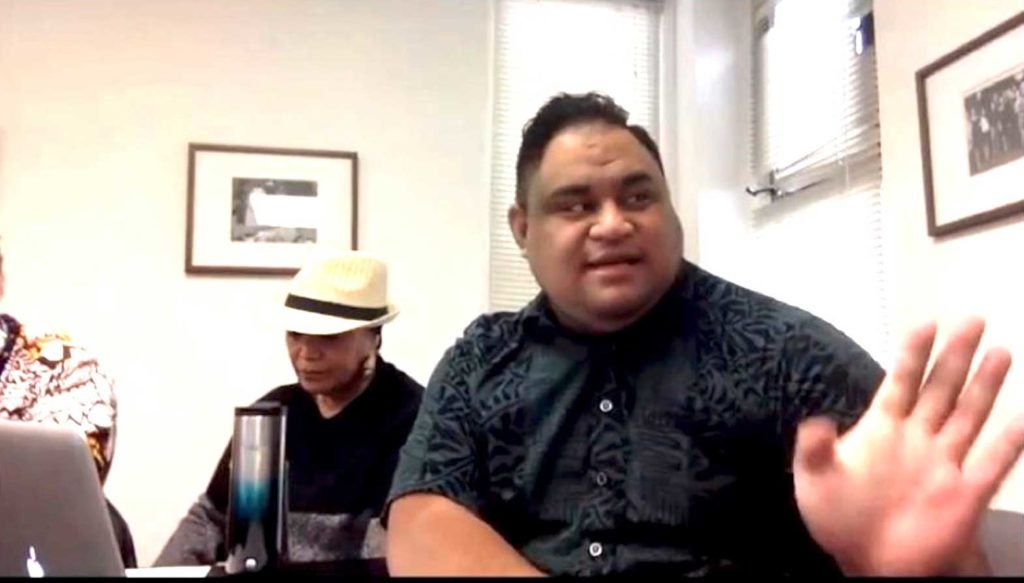 Tauanu’u Ve’e, of the Regional Pacific Islander Task Force, stressed that it’s important for their communities that people specify their island of origin when filling out the 2020 census questionnaire.

Despite mounting worries over the COVID-19 pandemic, more than a dozen Pacific Islander activists and media representatives gathered in San Mateo March 14 to anchor an online conference about the 2020 census and their collective stake in an accurate count.

They were joined online and over the airwaves by almost a hundred more people — various voices from the “Coconut Wireless” – who watched, listened and added their own perspectives.  The online conference was hosted by Ethnic Media Services with the support of the California Complete Count Office 2020 census.

“They [government officials] need to see us. We pay our taxes, we pay our dues,” said Nackie Moli, who runs the podcast Poly by Design. Identifying herself as a “proud Samoan woman,” she said she was excited to promote the census in her work with Island Block Radio, heard, she said, from Alaska to Mexico. “We all need to be counted.”

Census data permeates U.S. society. According to one expert, it directs $1.5 trillion in annual  federal spending (https://tinyurl.com/Census-drivenSpending) on health care, education and development, and more, in hundreds of government programs and projects.

Addressing the role of census data in supporting education, Manuafou Liaiga Anoa’i, of the Jefferson School District Board of Trustees in San Mateo,  said: “Empowering others — that’s census. Education in a classroom? That has to be funded. We have to continue to give our future generations more resources.

“We are an invisible community, but we don’t have that poverty mind-set. We continue to be warriors.”

Speaker after speaker addressed the battle to  distinguish Pacific Islander identity and “disaggregating” it from its current place as a subset of the Asian American population in the census.

The Pacific Islander community is highly diverse, but for most of its history, there have been few ways to specify origins on the census: Someone who identifies as “Asian or Pacific Islander” could also check boxes for Chinese, Filipino, Korean, Vietnamese, Japanese, Asian Indian, Hawaiian, Samoan, Guamanian  or “Other API.” “Other API” offered a write-in box for more detail – Tongan, perhaps, or Fijian, or something else.

In 2000, “or Chamorro” was added to the Guamanian choice, and for the first time, “Other Pacific Islander” appeared as a separate write-in box alternative to “Other Asian.”

According to the 2010 Census, the total U.S. Native Hawaiian and Pacific Islander population was 1.2 million, more than half living either in Hawaii or California. By 2018, that number had grown to 1.4 million, still largely in Hawaii and California, according to estimates presented by Alisi Tulua, of One East Palo Alto and OCPICA.

With a fast-growing influx in populations from Micronesia, the Caroline Islands and other equatorial climes, the United States is seeing some of the first refugees of climate change and sea rise.

“The migration is inevitable,”said Epi Aumavae, of Samoan Solutions. “When you have nowhere to live, you have to move. That’s the reality.”

And it’s all the more reason for communities to be sure they’re included in the census this year, she said, because those communities will continue to grow and need resources. The numbers counted this year will be the basis for the next decade of government apportionments.

“Climate refugees are going to gravitate to where their communities already are. Those populations are going to increase because people will have nowhere else to go,” Aumavae said.

Finau Tovio, of the College of San Mateo’s MANA program, added, “Our Tonga is our churches, community leaders, ancestors.”

Between the 2000 and 2010 censuses, the number of people checking Guamanian or Chamorro increased 60%, Samoan grew 38%, and Native Hawaiian 31%, Tulua said. Also, people who checked “Other Pacific Island” and wrote in “Tongan” increased 55% and “Tahitian” write-ins increased 53%.

“We see the truth in climate change. East Palo Alto is, in majority, on a flood plain,” pointed out East Palo Alto native and College of San Mateo student Shaana Uhilamoelangi. “We’re seeing a big influx from the South Pacific.”

“It’s so important to be heard and fairly represented,” said Sonya Logman, chief of staff of the California Complete Count Census 2020 office in her opening remarks at the online conference.   The state government dedicated $187.2 million toward ensuring a complete count of its people. “We’re in a league of our own,” she said.

To reinforce that message, Aumavae urged meeting participants and listeners: “Make phone calls with your families, have conversations with relatives, because we’re not going to be able to do it face to face. Please, write your island in so it tells this administration and whoever’s next that we’re here.”