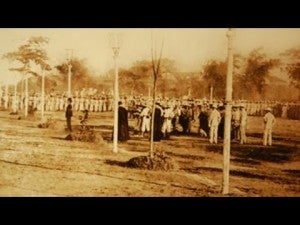 The execution of Dr. Jose P. Rizal at the Luneta in Manila.

CHICAGO–The Consulate General of the Philippines and the Central USA Knights of Rizal will lead the local Filipino-American community and the general public in the commemoration of the 120th year of Dr. Jose P. Rizal’s martyrdom on Friday, Dec. 30.

Consulate General’s Cultural Officer, Ms. Anna Liza F. Alcantara has issued an invitation to join her fellow staff members in a floral offering at 9 a.m. at the Rizal Monument at Margate Park between Clarendon Drive and Lake Shore Drive, between Wilson and Lawrence Avenues at Chicago north side.
The Central USA area commander of the Knights of Rizal, Mariano A. Santos, KCR, also announced the annual honoring of the Philippine National Hero with a cultural program and dinner fellowship later in the day at 6 pm at the Seafood City Function Room at Elston and Cicero Avenues, Chicago.

The KOR  Maynilad Chapter  will host this year’s event with Chicago, Malaya and Magiting Chapters participating.

The Consulate General enjoins all Filipinos, Filipino-Americans and their families and friends to take part in these patriotic ceremonies which are constant reminders to our kababayans of the significant role that Rizal played the in the fight for the independence of the Philippines. The 35-year old Rizal was shot by musketry by the Spanish colonialists on the early morning of Dec. 30, 1896 at the Bagumbayan where the present Rizal Park is located in Manila.

Rizal’s writings like his two novels “Noli Me Tangere” and “El Filibusterismo” exposed the brutality and corruption of a bankrupt colonial regime. He inspired the freedom-loving youth of his time to revolt that led to the Philippine Independence in 1898. The KNights of Rizal is a fraternal organization created by an Republic Act to promote the ideals of Dr. Rizal.