Self-quarantining to save America 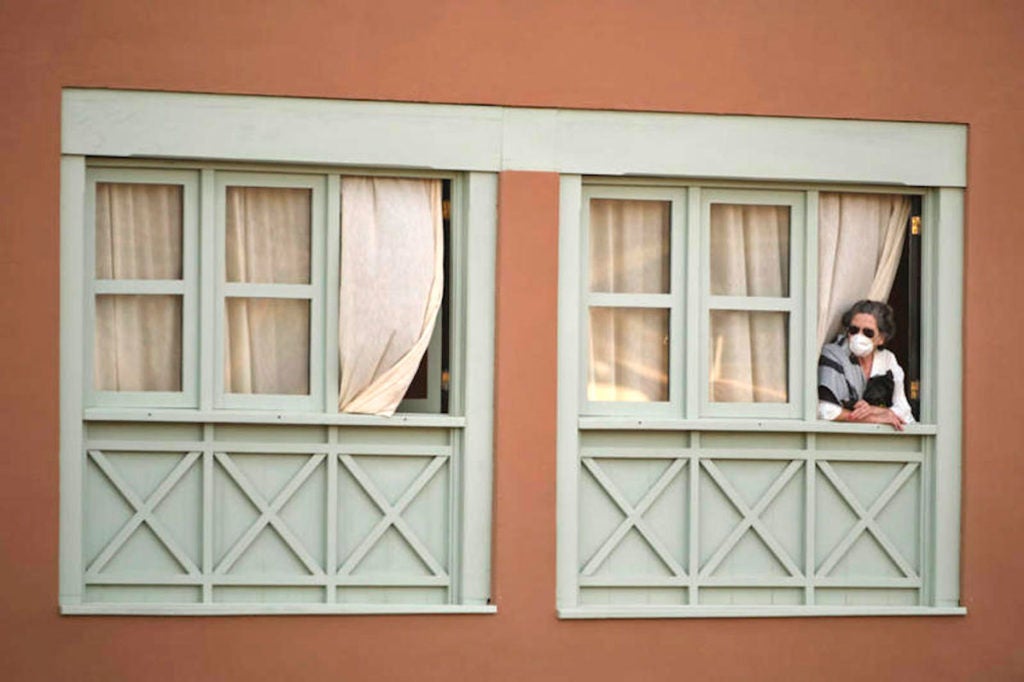 A woman looks out of a window at the H10 Costa Adeje Palace Hotel in La Caleta, in the Canary Island of Tenerife, Spain. In the US more people are beginning to self-quarantine as COVID-19 cases rise. AP FILE PHOTO

As a broken America shuts down, are you thinking about each other and yearning for the way things used to be?

Fellow virus fighters, this is the ultimate in the DIY health world.

When health insurance isn’t a right for all, and when whether you are sick or well is truly up to you, then all we have left is our own good sense.

It’s what they use to call good hygiene. Clean up.  Smell nice. Don’t be germy, Jeremy. Be decent in public.

In other words, don’t pick your nose. Don’t touch your face. Don’t make anyone else sick.

I know it’s hard in our selfish America, but try thinking of others—for a change.

So now we wash our hands with soap and water aggressively to the tune of “Happy Birthday” twice. Do it in  4/4 time to make sure it’s at least :20 seconds. And on the lyric, “Happy Birthday, dear so-and-so…”  use a full name. First names are too short. Bong-Bong Marcos Jr. gets you six syllables. A good Thai name like King Maha Vajiralongkorn gets you 8 syllables. Add the honorific “his excellency” and you got 13 syllables.

Better yet, sing out the phrase “Novel Coronavirus, a/k/a COVID-19”  for 14 syllables!  You will be reminded why you’re washing your hands like a fiend.

And then there’s the personal urban equivalent of what architects call “open space.”

To help me, I have a retracting monopod, essentially a one-legged tripod I use for my camera. The stick goes out six feet. Or about the length  of the late pop icon Prince in heels.

It spins out my safe radius in America. It’s broader than you think.

Forget about glass ceilings. Or a border wall.  These are our new invisible bubbles in America.

Of course, I blame the virus.

Trump enabled it all by doing nothing fast.  When he should have taken decisive action, he thought only of himself, seeing the case numbers like ratings numbers. Just keep them down. Tell everyone things are fine. Go to work. “It will pass,” he was saying even late last week.

The president is proving to be not just above the law, but above science and truth. And possibly even more deadly than the virus itself.

As I write nearly 50 people have died. It will double shortly.

By not acting to test the public quickly, the U.S. doesn’t know what it’s fighting. When the virus appears, it’s too late.

When truth and transparency is in order, Trump can’t help but lie. . His Friday news conference was just as filled with untruths  as his sniffly ten minute TV address.

On Friday, he said Google engineers were working on a testing plan for the country to happen quickly.

Not exactly. It’s only a  pilot program to start web site to aid  testing in the San Francisco Bay Area only. Nationwide soon? Don’t get your hopes up.

The slowness of real mass testing means  people have been allowed to carry and spread the virus without knowing.

The ignorance of our president has permitted the virus to grow to the point where it’s now mandatory DIY.

Unless you want “Coronavirus for All,” state and local officials in some areas are banning public gatherings of more than 250.

The new cliché is to have  “an overabundance of caution.”

Even the “Happiest Place on Earth,” Disneyland is closing.

And because of all that, the stock market—the biggest ratings generator the president cares about—has yo-yoed for the last few weeks, crashing to depths not seen since the worst financial crises in history.

Socially, financially, politically, the president is wreaking havoc throughout simply because he failed to understand the seriousness of the coronavirus in the first place.

Until contained, the virus’ numbers are sure to  double every five to ten days. Cases and deaths. That’s why most of us are staying home to stop the spread.

When person-to-person contact is how it spreads, that’s what has to stop. The president talks about a vaccine soon, but experts say that’s likely to be  least 12-16 months.

It leaves us on the front lines of this war with our best weapons— social distancing and hand washing.

For his lateness in action–and for leaving the country unprepared by dismantling the office of in the White House specifically designed to be the early warning signal in pandemic crises–does Trump take any responsibility at all?

No,” he replied at his Friday news conference.  “I don’t take responsibility at all.” The legacy moment of Donald Trump, simply not up to the task.

Oh, and now Trump says he’s taking the test. Would you trust the results if he shared them? I’m sure they’re “the most perfect test results” ever.

My self-Q and my fellow Asian Americans

Frankly, I wasn’t feeling too good myself, to paraphrase  the late Joe Cocker. I’ve been nursing a cold. No fever, so it’s not likely the virus.

But I’m sneezing. And my droplets are precious to me. I’m staying in.

However, before going into my voluntary self-Q,  my virus house-arrest.  I admit to doing some panic shopping. The last box of nitrile gloves.

I got some frozen organic blueberries and a few more canned beans, before realizing I didn’t need to do any of that.

I have enough. Especially toilet paper.

But now  I’m thinking about my fellow Asian American brothers and sisters.

Through social media, I’m hearing about cases of Asian Americans being beaten and attacked.

Connected to the virus? For upending the American way?

It’s all unverified, but if all our public and private lives are disrupted, why take it out on Asian Americans? We’re all in it too.

You can point the finger at the right-wing media that calls it “The Chinese Virus.” Or the president who calls COVI-19 a “foreign virus.”

There’s no reason to put a xenophobic spin. The name COVID-19 was given to destigmatize the virus.

There are no Republican, Democratic, Chinese or Filipino germs. Germs don’t need to show any papers.

If people want to blame anyone for our health lockdown, start at the top. Don’t go after innocent Asian Americans.

If all works out, this weekend could be our unifying moment. We’re all doing the same things. Trying to piece together our disrupted lives.

I’ve had to cancel events at the Filipino American National Historical Society Museum where I am museum director. We’re closed until further notice.

My daughter in DC  has a fever and was told by a doctor she likely has coronavirus. A test? Not available to her easily. She’s resting and fine for now.

But really, what good is a test?  Even if you have the virus, there’s no cure. They’ll tell you take Ibuprofen. And if you’re having trouble breathing, they’ll give you a respirator, if they have one.

Short of that, all you can do is quarantine.

Most everyone I know is staying in. My 80-something mother-in-law in conservative Ohio is on lockdown wiping down all surfaces to keep from going crazy.

Most are home binge watching something. (Or reading my old columns?)

It’s seems to be the best way Americans can “flatten the curve” and make sure the numbers of virus cases don’t rise above the medical community’s capacity to deal with it all.

If we have more patients than hospital beds and respirators, now that would be a crisis.

It’s your duty to stay home. Don’t spread it. Stay apart, together.

In that sense, maybe it’s a cleansing time too. Our public health moment could be a time for Americans to unify, heal and reflect about each other.

The virus has allowed us to hit bottom, restart, and think what it means to be American again.

Emil Guillermo is a journalist and commentator. He writes a column for the Inquirer.net’s North American bureau. Twitter @emilamok. Find him wherever you get your podcasts.