What if Pope Francis resigns?

What if Pope Francis resigns? 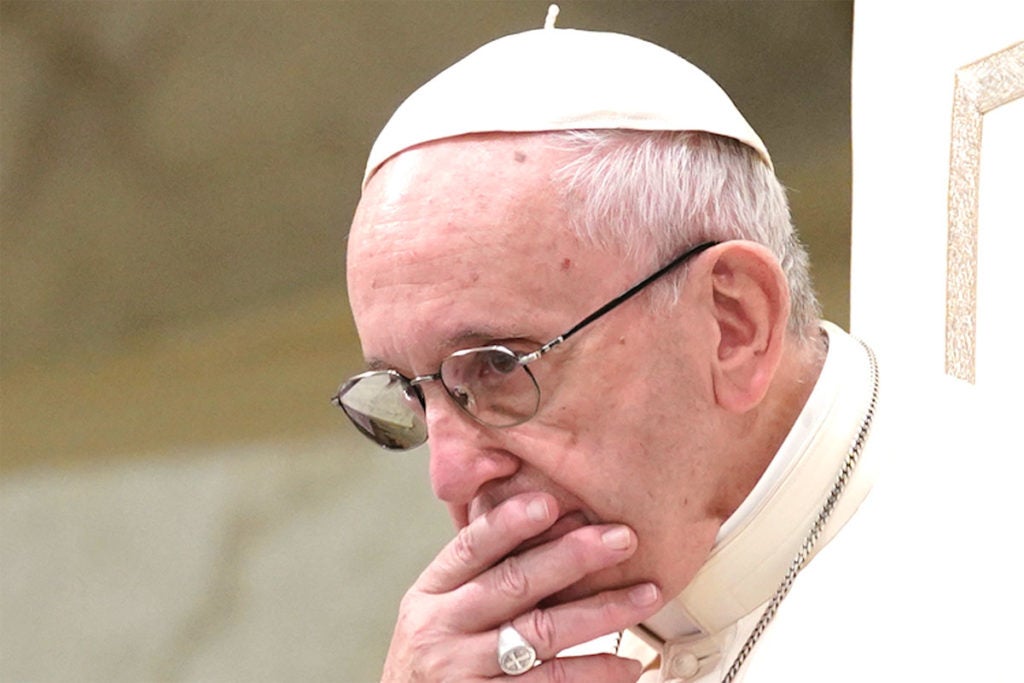 Deadly COVID-19 empties Rome, the Eternal City, and obligates Pope Francis to celebrate Mass behind closed doors. Coughing for a few days, he underwent a medical test for the coronavirus. Although the outcome was negative, there’s no stopping ill health. The health of the octogenarian pontiff, breathing with one lung since adolescence, goes into decline.

Here I am, daring to speculate or, if you wish, asking a hypothetical question in a not-so-ordinary time. Under the Spirit-inspired Francis papacy, the Catholic Church is blessedly guided through a perfect storm, even as her credibility goes south and dives so low. Will the Catholic Church be ready with two popes emeriti? For all you know, it might be a charming prospect for a Netflix sequel entitled The Three Popes.

Around this time in 2013, seven years ago, Benedict XVI resigned, made some cardinals cry, and sent shockwaves across Planet Earth. At the Sala del Concistoro, before the sacred College of Cardinals, he said in solemn Latin, Conscientia mea iterum atque iterum coram Deo… “After having repeatedly examined my conscience before God… I declare that I renounce the ministry of Bishop of Rome, Successor of Saint Peter.”

Only one rule in the 1983 Code of Canon Law mentions papal renunciation (technically, not resignation), that is, if the pontiff becomes incapacitated or, as with Benedict XVI, if he believes he is no longer capable to effectively carry out his official functions as head of the Catholic Church due to a decline in his physical ability.

Well aware of the seriousness of this act, with full freedom, if Pope Francis, at 83 or 84, renounces the Petrine ministry, I guess, he just have to recite Benedict’s reasons for such decision. It’s not the kind of event that we encounter every day, it’s also not the first time that the Vicar of Christ has renounced it nonetheless. Pope St. Celestine V renounced it in 1294 and Pope Gregory XII was forced to renounce it in 1415. In this kind of personal decision, the question of health and mortality seems to come into play, and the mortal man’s desire to be alone with the Immortal God in his last days becomes a force too strong to resist.

The barest truth is that no human leader lives forever. So if Pope Francis renounces it, there’s nothing to worry about, for the Apostolic Succession is built on a solid Rock. Jesus himself named the first pope Peter (Greek Petros means “rock”) and solemnly declared, “and upon this Rock I shall build my Church.” If Pope Francis renounces it and, for one, makes the ultraconservatives dance on the streets, the Catholic Church will move on. Like what I said, there’s nothing to worry about because the Church always does the most natural course of action known for centuries as a PAPAL CONCLAVE.

Take note that in the entire papal history, from St. Peter to Pope Francis, 196 popes out of 266 were Italians. “Change is coming” as the Jesuit pontiff enlarged and globalized much of the composition of the cardinal-electors, with the inclusion of more cardinals from Asia, Middle East, and other places outside Italy.

Pope Francis has put transparency into the Vatican economic sector and finances, has made Cardinal Chito Tagle the “Red Pope,” and has skillfully positioned other high-level Church servant-leaders in the corridors of power in an overhauled organization. He has fulfilled all necessary requirements, almost completely, for a radical reform of the Roman Curia, forging a new path for the Pilgrim Church. That begs the question of how a curia reform would “change attitudes, not just structures,” which His Holiness himself hopes to happen.

On his flight back to Rome from South Korea in 2014, Pope Francis toyed with the idea of “two or three years and then the House of the Father.” One year later, he told journalist Sylvia Poggioli, “My pontificate will be short, four or five years, I don’t know, maybe two or three. I feel that the Lord has placed me here for a short time, nothing more.” At that moment, was he thinking of death or papal renunciation?

But what really is in the mind of someone who, triumphantly seated in the apex of the powerful Catholic hierarchy and venerated by the world, would decide to abdicate the supposedly a life-long papacy? I recall how Archbishop Vigano and a couple of cardinals challenged him to resign. But, nah, that’s not Pope Francis! Pounded by multiple assaults coming from the Gates of Hell, knocked around, and worn out by dissenting bishops and priests, and now learning to confront his deteriorating health, like Benedict XVI in 2013, will he renounce it?

Or is it renouncing power when it’s time to renounce it? An eternal perplexity for the mundane politician! A true servant leader, on the one hand, is appalled by a sky’s-the-limit authority associated with earthly (-heavenly) power while, on the other, he believes that the Throne of Peter is meant not for supremacy but for service.

My fervent prayers for Pope Francis and for our Mother Church.

Jose Mario Bautista Maximiano ([email protected]) is the author of The Signs of the times and the Social Doctrine of the Church (Salesiana, 1991) and THE CHURCH CAN HANDLE THE TRUTH (Claretian, 2017).