Pope Francis: ‘My pontificate will be short’

Pope Francis: ‘My pontificate will be short’ 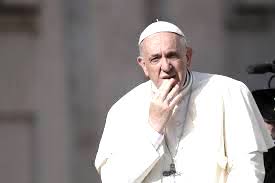 The 2,000-year-old unbroken papal succession dates back to Saint Peter, the first Pope. Of this, the shortest pontificates were those of Urban VII (died 1590), who was Pope only for two weeks, and Celestine IV (died 1241), who reigned for two weeks and three days, both of them dead before their consecration.

On his flight returning from South Korea in 2014, Pope Francis mentioned: “Two or three years and then the House of the Father.” In 2015, he told journalist Sylvia Poggioli: “My pontificate will be short, four or five years, I don’t know, maybe two or three. I feel that the Lord has placed me here for a short time, nothing more.”

In the beginning of his pontificate, Pope Francis created a real security headache for Vatican officials because he refused to travel in his bullet-proof pope mobile. The Vicar of Christ said that inside the custom-built “sardine can” he was unhappy not to properly greet people.

In 2014, His Holiness, who doesn’t fear the devil himself, went to Calabria, the southern Italian base of the ‘Ndrangheta crime syndicate, and bluntly told the mafia bosses: “Convert, there is still time, so that you don’t end up in hell!”

In 2015, Pope Francis wanted to visit the war-torn Central African Republic (CAR). Because of the dangerous nature of that papal trip, the Vatican officials, who were constantly monitoring the security situation to the last minute, were not even sure whether His Holiness Francis would be able to actually make it to CAR. But he got his wishes and visited the place, an active war zone.

The Holy Father made this remark: “It’s true that anything could happen, but let’s face it: At my age I do not have much to lose.” When everyone else wants to live, our octogenarian Pontiff isn’t afraid to die. The old man is as brave as Saint Peter and all the other martyred popes.

Elected on March 13, 2013, Francis is the Supreme Pontiff of the Universal Church for six years going seven (with one lung functioning, otherwise alive and kicking).

Vatican Council II (1962–1965) was the “new Pentecost” and “the beginning of a revolution in Christianity” that led TIME Magazine to say: “1962’s most fateful rendezvous took place in the world’s most famous Church—having lived for thousand years in men’s hearts and minds.”

Imagined to be a Caretaker Pope, Saint John XXIII was the Vicar of Christ and the sovereign of the Vatican City State from 1958 to 1963, who surprised the world by calling the historic Vatican Council II.

There were five years of pontificate for John XXIII and eight years for Benedict XVI. Elected Supreme Pontiff of the Universal Church in 2005, our venerable German Pontiff resigned in 2013, and is now peacefully residing inside the Vatican.

So, what’s in the mind of someone who, triumphantly seated in the apex of the powerful Catholic hierarchy and venerated by the world, would suddenly decide to resign? I can only surmise that a servant leader, pure and simple, was appalled by an authority associated with earthly power, for he truly believed that the Throne of Peter was meant not for supremacy but for service.

Or, pounded by multiple assaults coming from the Gates of Hell, knocked around, and worn out, Benedict XVI decided to abdicate the supposedly life-long papacy, renouncing power when it was time to renounce it.

On February 28, 2013, in his official farewell address to the College of Cardinals, even before the conclave, even before electing the next pontiff, Benedict XVI proclaimed: “In your midst is the next Pope: I promise him obedience.”

By declaring so, Pope Emeritus Benedict XVI trusted that the papacy, the hierarchy, and the Holy Priesthood are rooted in the apostolic succession, and that the Holy Spirit is at work until the end of the world.