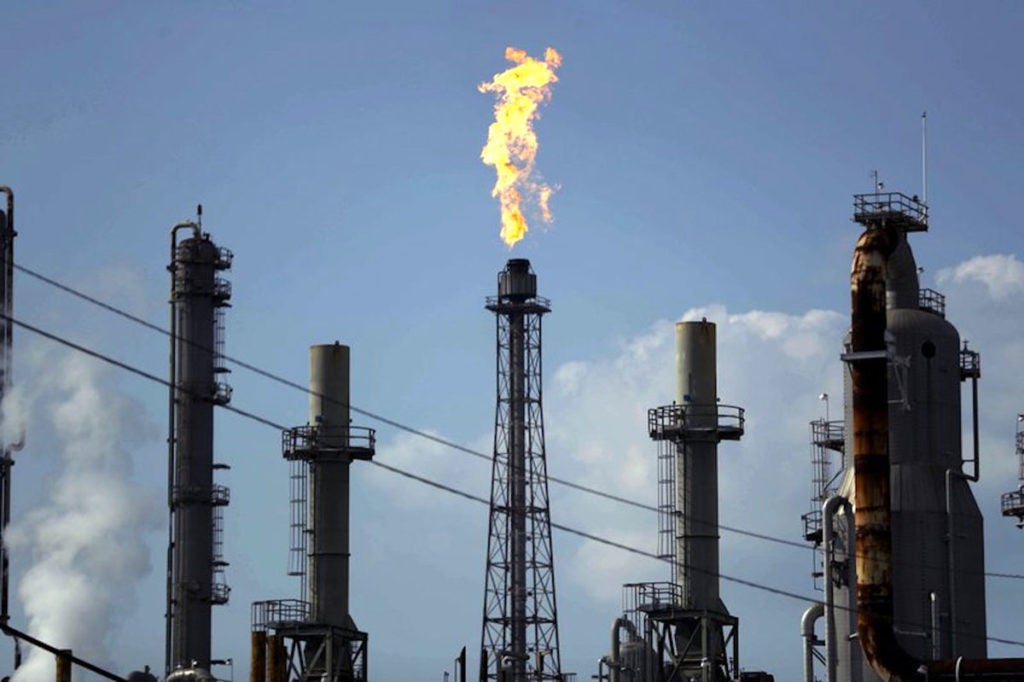 A flame burns at the Shell Deer Park oil refinery in Deer Park, Texas. Oil prices are plunging Sunday, March 8, 2020, amid worries that an OPEC dispute will lead a virus-weakened economy to be awash in an oversupply of crude. AP FILE PHOTO

A clash of two oil titans – Saudi Arabia and Russia – is sending shock waves through energy markets, with wide-ranging implications for consumers and oil companies, including those in the No. 1 producing country, the United States.

The decline followed Russia’s refusal last week to join the OPEC oil cartel in proposed production cuts aimed at supporting prices. Thwarted in its search for cuts, Saudi Arabia, the leading OPEC member, sharply changed course by cutting prices and signaling it will ramp up production.

Here is a look at the oil price war and what it could mean over the longer term in the industry as well as for consumers at the gas pump.

Q: WHY ARE OIL PRICES FALLING?

A: First came the coronavirus outbreak, which reduced travel and transport, sharply reducing demand for fuel. The international Brent benchmark had fallen from $69 at the start of the year to around $50.

Then came last week’s meeting between OPEC and non-member countries. On the agenda: a production cut of 1.5 million barrels a day, or about 1.5% of global production. The idea was to keep prices from sagging even more as demand is expected to fall this year. Saudi Arabia, the world’s No. 2 oil producer, wanted No. 3 Russia and other nonmembers to take 500,000 barrels per day of the cuts. Since 2016, the Saudis and the Russians have worked together on production issues.

But this time the Russians balked. They refused to join new cuts, or even to extend previous production cuts that were due to expire at the end of March. And the Saudis hit back, telling customers that they were going to ramp up production and slash prices for Asian customers.

Q: WHAT IS SAUDI ARABIA’S GOAL?

A: First, protecting market share. Both Saudi Arabia and Russia have seen U.S. producers take a chunk of their market, and falling prices help keep customers on board.

Second, Saudi Arabia may hope that the pain of low prices will force a Russian rethink. “Saudi Arabia has de facto launched a price war against Russia, promising to sell its oil at a discount in order to maximize its oil revenues,” say analysts at UniCredit bank. “It appears Saudi Arabia wants to cement its position as the world’s top oil exporter and to persuade Moscow to return to the negotiating table.”

A: Russia may have seen no point in cutting production only to lose market share as U.S. shale producers in Texas and New Mexico take up the slack. Analysts say Saudi Arabia may be underestimating Russia’s ability to weather low prices. Both countries are heavily dependent on oil revenues for their state budgets. But Russia says it can balance its budget at around $42 for its own benchmark crude. Saudi Arabia on the other hand needs more than $80, according to the International Monetary Fund.

What Saudi Arabia has done is to send prices so low that both will feel a serious crunch.

And Russia may have a longer-term target: the U.S. oil industry.

“The Russians are doing this out of long-term strategic considerations,” said Tom Adshead, research director for the Macro-Advisory consulting firm in Moscow. “Their view is that by doing this they can damage the financial health of U.S. shale-oil producers and that by doing this they can take a lot of U.S. capacity offline and thereby remove U.S. producers as a source of competition. The other thing that is on their mind in all this is that if they cut then that will also primarily benefit U.S. producers.”

“So they’ve decided they’re going to take some short-term pain in order to inflict damage on one of their major competitors,” Adshead said.

Q: WHAT DOES THIS MEAN FOR US PRODUCERS?

A: The current low prices could constrain activity in the American shale oil industry. A downturn in oil prices in 2014-2016 hurt companies in places like the Permian Basin in west Texas and eastern New Mexico. According to the Federal Reserve Bank of Dallas, $50 per barrel is the price at which it becomes profitable to drill a new well in the U.S. Large producers such as Exxon have already scaled back with prices at $50 a barrel. In Texas, the number of active rigs fell from 553 in October 2018 to 398 in January 2020. Around the same time, the oil industry in Texas shed about 14,000 jobs

“With the growth phase of the shale boom grinding to a halt due to the lack of investment in the industry, now U.S. shale oil could find itself running into a brick wall,” says Innes from AxiCorp.

The head of the International Energy Agency, Fatih Birol, says that he believes the U.S. shale industry will survive.

Q: WHAT’S IT MEAN FOR PRICES AT THE PUMP?

A: Most of the price of gasoline in the United States simply reflects the price of oil, so lower crude prices should mean lower pump prices with a lag of about six weeks. Right now, they’re at $2.42 according to the U.S Energy Information Administration. When crude fell to $36 in 2016, prices at the pump averaged $2.15. Lower pump prices mean people have more to spend on other goods.

The impact is less pronounced in Europe since most of the price is made up of taxes. Currently, gasoline costs 1.32 euros per liter in Germany, or about $5.70 per gallon.

LATEST
Should workers be paid even if not working?
About half of US workers lose income due to virus
God writes straight with twists and turns
Hawaii Senate passes bill to ban foreigner home purchases
PG&E moratorium on customer shutoffs for nonpayment
Fil-Am writer Jia Tolentino wins $50K Whiting Award
MOST READ
usa Fil-Ams braving frontlines against coronavirus
usa PH-born Filipina is state of Washington’s top adviser on COVID-19
usa Priests as COVID-19 frontliners
usa A day in the life, in the Age of COVID-19, Part 1
usa The power of lying
usa How we’re are coping with the pandemic across the globe
usa Loss of smell, taste, might signal pandemic virus infection